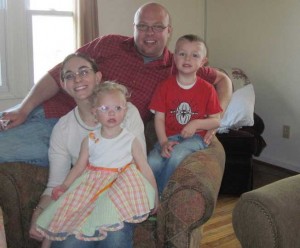 Each time we share a Q&A with a fit celeb or a fitness professional, the interview is chock full of interesting tidbits and helpful advice. But fitness professionals are fit for a living. And celebs have more nannies, trainers, chefs, et ceteras, at their disposal than the typical mom. So I wanted to reach out to some of our real mama readers to see how they handle their day-to-day challenges. How do real moms fit in fitness? What struggles are they facing?

Not surprisingly, real moms have just as many awesome tips and tidbits to share. And they have great senses of humor. This week, reader Sarah K., an accountant and mom to Liam, 4, and Mary, 2, shares her views on body image after baby and how she carves out time for herself to work out! (This mom rocks: Her “giant” Liam was born weighing in at 9 pounds, 13 ounces, and didn’t even fit into a newborn diaper. Ay carumba!)

Thanks so much to Sarah for being so honest about her experiences. Want to share your real mom experiences? Email me at erin@fitbottomedmamas.com to be featured as a real mom star!—Erin