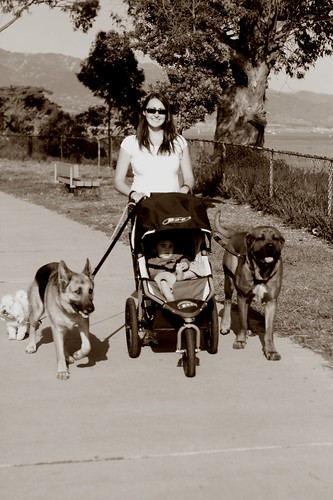 This woman has it under control. I need tips! Credit: DieselDemon

It was one of those days in July where the streak of 100-degree, insanely humid days had finally ended. I’d been up since 6:30 a.m., so two hours later, breakfast was done and I was in the mood to get outside and enjoy the weather. Super ambitious, I decided to take the dog along to accompany my daughter and I as we strolled the neighborhood. I was in a workout frame of mind.

I grabbed the stroller and hauled it down the front porch stairs. I strapped the baby in, with the plan to sprint back into the house to grab the leash and dog quickly so that Avery would only be out of my sight for half a second. So I grabbed the leash…grabbed the dog…and the dog didn’t have her collar on. At this point, I couldn’t just leave her behind because as soon as she realized she was coming along, there was no turning back. And I can’t handle those sad puppy eyes.

So outside I went to get the baby. Unstrapped the baby, came back inside, put her in her designated safe play zone so I could go hunt down the collar.

The collar? My husband had taken it off because the dog shakes and the jingling of her tags sometimes wakes the baby. So I went upstairs, grabbed her collar and leashed the dog up. This time, I headed outside with the dog, and tied the leash to the stroller so I could go in and get the baby.

I’m sure you can see where this is going.

So I come in, grab the baby, head down the stairs to strap baby into stroller for the second time. The dog, previously fine strapped to the stroller, gets spooked for whatever reason, freaks out, knocks the stroller over and starts dragging it down the sidewalk. I’ve got a handful of baby, so I’m one-handedly trying to calm my ‘fraidy pug, while trying to right the runaway stroller. I finally managed to both calm the dog a little and get the stroller upright so that I could get my daughter in. Then came the not-so-easy task of untying the leash from the stroller—because in the dog’s freakout, she’d tightened my knot by about a thousand percent. SIGH.

A few minutes later, we were on the road. The dog had calmed down. The baby thought it was hilarious that she had the best view of the dog possible. And I was exhausted before my workout even began.

Have you had similar misadventures in strolling? Do share so that I know I’m not alone! —Erin