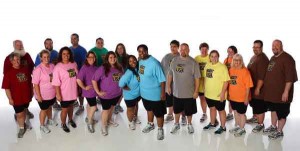 *SPOILER ALERT* This Biggest Loser 13 recap reveals details from last night’s finale. So if you don’t want to know the dramatic details and who won the title of The Biggest Loser, click away, my friend, click away!

So…last night’s The Biggest Loser finale was interesting. In a I-just-drank-12-cups-of-coffee way. After what has been nothing short of a dramatic season—what with the walk-offs and all—last night’s finale was fast, rushed. Almost as if everyone was ready for the whole big thing to be over. Like they were ready to move on…

From the discussion on Twitter last night, everyone seemed to be impressed with everyone’s weight-loss, but fine with getting through things quickly. No season recaps or highlights, really. Just contestants up and on the scale, rapid-fire. After 30 minutes of that, Mike was determined the at-home winner with an impressive 160-pound weight-loss (about 44 percent of weight lost). Then, out came Conda, Jeremy and Kim. All looking crazy good, Ali chatted each of them up a bit, showed a quick clip and, bam, weigh-in time.

It was seriously over before it started. Although we were rooting for Kim all the way, Jeremy ended up winning the title of The Biggest Loser by losing 199 pounds and nearly 52 percent of his body weight. Absolute craziness. Kim lost 118 pounds (46 percent), and Conda lost 115 pounds (39 percent). Kim, by far, had the most “wow factor” of the evening. Looking strong and trim, she could seriously pick back up her wrestling career tomorrow.

In year’s past, at the end of the finale, Ali will usually say something like “see you next season!” or they’ll even share clips of the season to come. BL traditionally has seasons that begin in September and January, but there was no mention of the next season this time. And according to a Tweet from Diets in Review, which cover all things The Biggest Loser: “there hasn’t been any casting and most likely *IF* there is a season 14, it won’t happen until January.”

Hmmm….at least Bob mentions “next season” in his interview after the finale:

What did you think of last night’s The Biggest Loser finale? Inspired? Disappointed? Worried there won’t be a season 14 or glad for the break? Let us know! —Jenn