It’s another month and you know what that means: It’s another Brooks Running review! For the last few months, I’ve been testing out the PureGrit 2 and the PureDrift, while Tish has been jogging to and fro in the PureConnect 2. See our thoughts on all three of these kicks below! And be sure to see how these compare to our previous review of the Brooks Running Pure Project line! 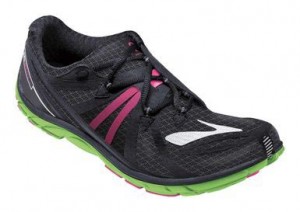 I can’t praise the folks at Brooks Running enough for blessing the world with the PureFlow shoe. They have easily become my favorite pair of running shoes ever, so I was geeked to try out another shoe from the Brooks’ minimalist line. I decided on a nifty pair of the PureConnect 2s, but I have to say they didn’t do it for me quite like the first pair. I put them on and felt like I was walking around in bicycle cleats. They have an odd traction on the bottom that felt a bit awkward. They’re by far the lightest pair I’ve tried though, so if you’re all about the air-like glide, then you might enjoy these. I’d definitely try on a pair and walk around for a bit just to see if the bottoms weird you out like they did me.

While these shoes are $90, I’ve noticed that more and more running shoes are in the hundred-dollar price point, so I was actually thrilled to see them run a bit cheaper. Ha ha. Get it?

In all honesty, I haven’t tried a lot of trail running shoes. And while I wouldn’t call myself a seasoned “trail runner,” I do like to run on surfaces other than treadmills and sidewalks and tracks, so I really wanted to give the PureGrit 2 a go. So I laced these up, and ran over grass and gravel trails mile after mile.

The first thing I noticed about these shoes was how light they were. Sure, they’re heavier than the PureDrift (review coming up in a second!), but with a heftier sole that protects against the elements, it’s pretty impressive how light they are. They also have this cool multi-directional lug pattern that gives you nice grip on whatever uneven surface you’re running on. And they’re made of a nice thicker material on the upper part, too, so these feel extra durable and should hold up for about 250 to 300 miles. (But may be a little stiff for the first few wears, so be aware of that before hitting the trail.) At $100 a pop, they’re totally reasonable. Truly a minimalist trail running shoe! 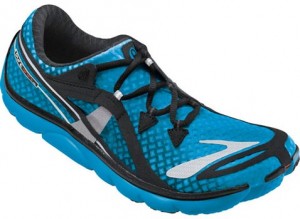 I just have one word for my feelings on the PureDrift: obsessed. Okay, I have a few more words: really, really obsessed. While I enjoyed running in the PureGrit 2, slipping my tootsies into the PureDrift was like coming home. Despite being the most  minimalist in the Pure Project line, I found these to feel the best both in terms of comfort and function. They’re insanely light and have an extra-wide toe box that allows your toes to expand and flex naturally. They also just feel cushion-y, despite being so darn close to the ground (for the record, they come with a thin sockliner that you can remove for a totally zero-drop experience). And they have that cool split big-toe sole thing that allows you to really push off from the ground for an even more barefoot running-type experience. (And believe me, said cool split big-toe sole thing really works the muscles in your feet and toes, as I’ve been sore there after longer runs and workouts!)

Also at $100, I simply can’t recommend these enough. In fact, I’m wearing these as I write this right now (and I’m obviously not running this second). I just love them that much. If you are looking for a new running shoe and want something that’s minimalist yet comfortable, get these. I’m not exactly sure how Brooks Running can do both of those things simultaneously, but by golly they did!

All of these new Brooks Running shoes just came out on January 1, so tell us: Which one sounds best to you? Or which one have you already tried? Spill the running shoes beans! —Jenn & Tish