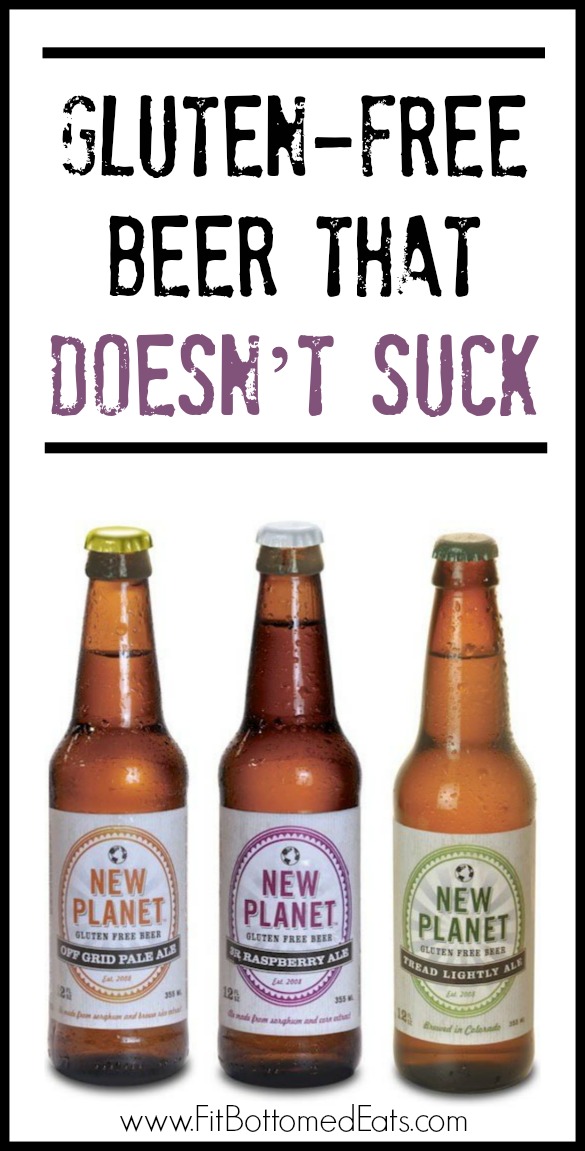 Here’s a fun fact: I really, really like beer. So much so that I’m in a local beer club/beer-blogging group. (Have fun guessing what pseudonym I use over there—it’s not that hard with what I’m about to tell you…) But since cutting out mostly all gluten from my diet, sadly, my beer days are pretty limited. In fact, I almost always go with wine over beer because A) I really like wine, too; B) Sometimes beer makes me splotchy (especially if I eat Mexican food with it; go figure); and C) When I have even half a beer, I’m almost certain to spend the next day or two in a gluten-induced brain fog haze (So. Not. Fun.). I’ll sometimes sip on a hard cider, but not very often. So when New Planet offered to send us a couple bottles of its gluten-free beer to review? I was pumped. At long last, truly certified gluten-free beer with a rep for not being terrible!
I tried New Planet’s Off Grid Pale Ale, 3R Raspberry Ale and Tread Lightly Ale (now called Blonde Ale). First off, know that no gluten-free beer really tastes that much like beer. Heavy on the sorghum and lacking in a lot of what makes beer taste like beer (damn you, wheat!), it’s just a different drinkable animal. So I think comparing it to “real” beer is unfair.
With that said, these aren’t terrible. In fact, they’re pretty darn decent. Again, they’re not beer-beer. More of like a cider-beer crossover. If you’re feeling fruity, the Raspberry Ale is kind of fun. I wouldn’t drink it every day, but I can see it being fun in the spring. And the Blonde Ale is one of the best gluten-free ales I’ve tried. However, the Off Grid Pale Ale was my fave by far and what I found to be most “beer-like” of the bunch with more hops and definite citrus notes. Oh, and get this: they have calorie counts on the label! All of them are 170 calories or less a bottle. Love that. (Can all beers start doing this? PLEASE.)
Were these good enough for me to quit the vino? Not entirely. But are they at the top of the list for when I’m craving beer and reaching for the gluten-free variety? Absolutely!
Now tell us, have you had any gluten-free beers? Tried New Planet? Would love to hear your take! —Jenn