I am participating in a sponsored campaign hosted by Advil®, as a part of the Advil® Relief In Action program. I received compensation for this post. While all opinions stated are my own, I make no claims about Advil® as a product or its effectiveness.

I did my Tough Mudder over the weekend, and I’m still alive to write about it! Granted, at the time I’m writing this (Sunday), my fingernails still have mud ingrained in them and it’ll take another few days for the bruises to calm down, but I did it! And the more hours that pass between me and the event itself the more I realize: That was tough! I guess “tough” isn’t in the name for no reason.

The funny thing is that you can train to increase your strength. You can train to increase endurance. But you cannot train for the mental part of the race. The jack-with-your-mind electric shocks or the claustrophobic tunnels. You can’t easily practice running muddy hills or swimming through ice. And you can’t really train for slippery. And there is a mud-ton of slippery. Part of it is just having some mental toughness and grit to stick with it.

My hubby Alan and I weren’t assigned to a specific heat time, so we were able to get up early but not too early and drive the 45 minutes down to Englishtown, N.J. We checked in, got our requisite clean “before” pictures, took the necessary bathroom breaks and headed to the start. 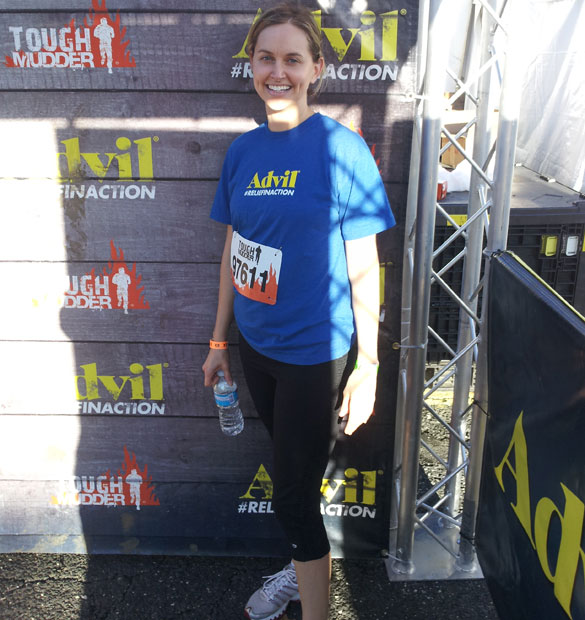 So fresh, so clean, so blue.

One of my favorite things about the Tough Mudder event is that it has a sense of humor. You have to scale a wall before you even get to the start corral. Then with a little pomp and circumstance, a moment of silence to play “Taps” for members of the military, pumping up the crowd and playing of “Eye of the Tiger,” and we were off.

The first real obstacle we hit was a set of walls that were way over my head, so at least 7 or 8 feet tall. I started to feel pretty bad-ass when I managed to get over both of them without even a boost from Alan. Hell yeah. I could do this. Another of our early obstacles was the Electric Eel, where you crawl through muddy water and oh, yeah — there are live wires dangling in front of you that you have to get through. I almost made it to the end without getting zapped and then my ear got it full force. Now, I’d never been zapped with electricity before, but I was expecting to feel an intense version of static electricity or something. Nope. It was like a really hard punch to the head. Talk about a kick when you’re down in the mud!

Running through the muddy woods was challenging, and mostly because the terrain was so varied you had to really watch your step. How I managed to avoid twisting an ankle, I don’t know. Rocks, roots, holes in the ground — they were all your enemy as you jogged through the woods. One guy in front of us landed his foot in a really deep hole without hurting himself, and that stuck with me as a warning for the entire race.

While all of the obstacles are physically challenging in some way, some of them are almost purely mental, like the Cage Crawl. For this one, you’re floating on your back in the water, pulling yourself through the obstacle by a chain link fence that is just a few inches above your face. It’s all fine and dandy until the clearance gets noticeably smaller and you basically only have a little of your face out of the water. To add to the mental challenge, you can’t really turn around to see how much farther you have to go, so you just keep going, trying not to feel claustrophobic.

A couple miles or so in, we had to Island Hop. It was like we were on Wipeout, belly-flopping from one raft to the next to cross a creek. We human wheel-barrowed each other through mud. We crawled through mud under barbed wire. When we came to the third or so water station that had bananas on hand, we practically swallowed the bananas whole. Ah, sustenance.

You jump in a massive dumpster of ice water. Make your way to a wood plank and have to fully submerge yourself underwater to get to the other side of it. Then you have to come out and haul yourself up and out of the ice water before you die. You probably think I’m kidding about dying, but I’m really not. It is a level of cold and pain your body has never experienced before; you feel your body lock up and you feel the need to escape because you can seriously feel your body shutting down. I don’t even know what to say about it. I just. Can’t. Even. It took at least 10 minutes for both of us to stop feeling sharp zaps throughout our entire bodies — our bodies bringing themselves back to life. Seriously.

One other mental challenge throughout the event was that you never knew where you were distance-wise. So when we heard from water station volunteers that we were five miles in, we knew we were in good shape. We were about halfway! We were awesome. The Mudder’s sense of humor continues throughout the race too, with signs along the way goading you to keep going. One of my favorites was one along the lines of “It’s not embarrassing to quit a Tough Mudder; it is embarrassing to sign up for a 3-mile mud run.” It just made me laugh when I needed it.

Then we hit a few obstacles I had no shot of completing. Just the Tip entails trying to shimmy sideways along a wall, while hanging from the tips of your fingers. We both fell into muddy water when our body weight proved to be too much. The Funky Monkey bars? Yep, I was swimming by bar three. Slippery, wet hands are a serious disadvantage — and it’s pretty impossible to keep your hands nice and dry. Besides, monkey bars are hard even under perfect conditions!

Two of the best obstacles: Walk the Plank, which is a 15-foot jump into water that’s almost pure fun with some adrenaline attached, and the fire obstacle, which was a blind jump through flames into water below. After the ice pit of water, the fire and water felt absolutely toasty and awesome.

At some point, we heard someone say there were two miles left — and we were feeling like rockstars. And then those two miles felt like five. The event was held at a raceway, and we must have run through a mile of motocross hills. Some muddy, some just really freaking steep. One we got to slide down on our butts. It just went on forever it seemed.

The Warrior Carry was another obstacle you couldn’t complete alone as it challenged Mudders to take turns carrying your partner on your back, embodying the spirit of camaraderie and volunteerism that Tough Mudder, Relief in Action and Wounded Warrior Project represent. Because Alan’s much bigger than I am, he had the good fortune to carry me the whole way; the last thing we needed at that point was for me to throw my back out trying to carry 200+ pounds of human.

Then we got to the Mud Mile. And oh, the humanity. I’ll just say: these pictures of Mud Mile are a joke compared to what we dealt with in our version. We were waist deep in muddy water, with 10? 12? more? walls of slippery, muddy clay between us and the end. It was so ridiculous. Strangers were helping strangers, people were pushing and pulling each other — because if you didn’t have a foot-hold it was impossible to pull yourself over a mud wall that was several feet taller than you. At one point a girl in front of me was struggling and without thinking or asking, I pushed her fit bottom to give her a needed boost. Hoping she didn’t think it was one of the many dudes copping a feel.

People helping others really gave me warm, muddy fuzzies, though. The only reason I made it up Everest was the help of the guys at the top who gave me a hand. And then all that was left was Electroshock Therapy. Everyone stands there, mentally gearing up for the electric shocks. And I’ll admit, I giggled a little when I saw people fall sideways as they were running. I was thinking, “Just run through it!” Haha, no. Remember the punch to the head? Yep, that’s what it’s like. So I take off running and a hard punch to the arm takes me down into the mud. At least two more zaps and I was through, hugging Alan and heading for the finish. I was so stoked to get that damn orange headband and my beer (which, like the headband, went straight to my head and wow, I’ve never felt like that after one beer. So deliriously happy, so confused, so muddy!) 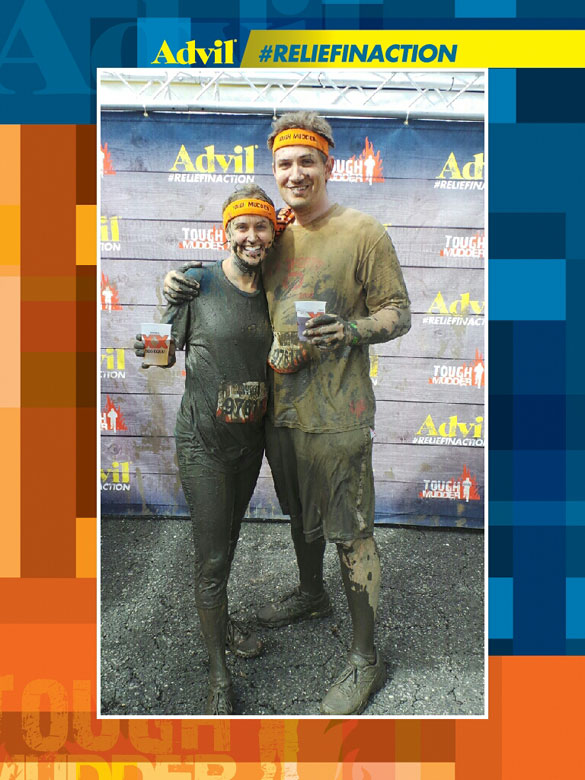 It certainly was fitting that Alan and I celebrated eight years of marriage this week, because without him, this race would have been so much harder, and likely impossible. We had fun pushing each other through it and supporting each other all along the way. It was just a ridiculously hilarious challenge from beginning to end.

It was also hilarious because running with my Advil Relief in Action shirt, I got a lot of Advil comments, mostly “Where can I get some Advil around here?” and “We’re all going to need Advil later!” If you don’t know, the Advil Relief in Action campaign honors and supports people who don’t let pain get in the way of helping others. Both Advil and Tough Mudder are supporters of Wounded Warrior Project (WWP), and this commitment to a cause that assists injured service members and veterans of our armed forces — the ultimate volunteers — is exactly what the Advil Relief in Action program embodies. It was really cool to be part of such a good cause. Head on over to www.advil.com/reliefinaction to learn more.