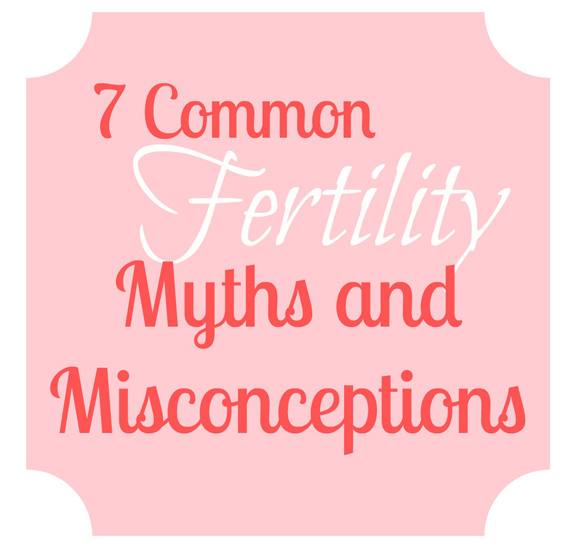 As Jenn proved recently by becoming pregnant despite the on-paper odds, there is an element of mystery when it comes to getting pregnant. Sure, you can know the logistics of it and time it right, but there is still SO MUCH to learn about fertility and infertility and getting pregnant. After all, “unexplained infertility” wouldn’t even be a thing if we knew it all, right? So we wanted to share this list that the Fertility Centers of Illinois shared with us on the biggest misconceptions they hear from patients. It’s apparently super common to misunderstand fertility, but as they say, the more you know…

1. “He had kids in a previous marriage, his fertility is fine.” Paternal fertility decreases with age, particularly after age 40. A study found a direct link between paternal age and an increased risk of autism and schizophrenia, with fathers passing on as many as four times more genetic mutations when compared to mothers. With age, there is a decrease in the concentration of healthy, mobile sperm, as well as semen volume.

2. “My mom had a baby in her 40s and I have a child; I am fertile.” Previous fertility and genetic fertility history doesn’t ensure prevention of secondary infertility, which is defined as a couple with a child being unable to conceive again after a year. The Centers for Disease Control estimates that 11 percent of couples experience secondary infertility.

3. “Smoking doesn’t affect our chances of getting pregnant.” Smoking as few as five cigarettes per day is associated with lower fertility rates in males and females. The British Medical Association found smokers may have a 10 to 40 percent lower monthly fecundity (fertility) rate, and the American Society for Reproductive Medicine estimates up to 13 percent of infertility is due to smoking.

4. “We always have sex right after ovulation.” Once ovulation is over, pregnancy is not possible. Ovulation, when an egg drops from the ovary into the fallopian tubes, occurs once a month roughly 7 to 10 days prior to a woman’s period. To become pregnant, a sperm must meet the egg during this 24- to 48-hour timeframe. Couples should have sex prior to and during ovulation as sperm can survive in the reproductive tract for 72 hours.

5. “I know my biological clock is ticking, but my eggs are fine until 40.” Women are born with seven million eggs, which is reduced to 400,000 at puberty. In a woman’s lifetime, approximately 400 to 500 eggs will ovulate. Ovarian reserve declines as a woman ages, with egg supply taking a rapid decline in the late 20s and again in the 30s, particularly after 35. Pregnancy rates in the early 30s are 15 percent, then decline to 10 percent after 35 and 5 percent over 40.

6. “I am healthy, my age won’t affect my fertility.” Being healthy and fit can aid in pregnancy, but the age of your eggs is unaffected by your fitness and diet regimen. Age is the most critical component of fertility potential.

7. “His weight or my weight doesn’t affect our chances or pregnancy.” Extra weight causes hormonal shifts that can affect ovulation and semen production, and can make pregnancy more difficult to achieve. It is estimated that 70 percent of women with infertility are also obese. Losing 5 to 10 percent of body weight can boost fertility in men and women.

What about you? Did you believe any of these before? —Erin