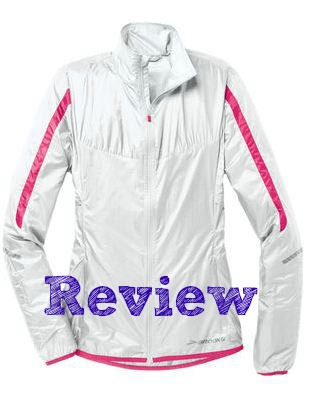 I’ll admit that from the photo, the Women’s LSD Lite Jacket IV ($90) looks like it’s a bit heavier or bulkier than it actually is. In reality, it’s an incredibly thin and sheer jacket (the white is pretty much see-through) that’s light, surprisingly soft and semi-fitted. It’s so darn light, in fact, when you wear it that you almost forget that it’s on! But having it on does a number of things for you that are awesome in fall. First, it’s windproof and water-resistant, making it perfect for the changing conditions of fall. Second, it gives you a light outer layer that keeps you warm, with mesh underarm panels to not keep you too warm (if you’ve ever run in a windproof jacket that doesn’t breathe and gets stuffy, you know how important this is!). Third, it has fun fashionable flair like ruching and pleating. Fourth, it’s functional, as it has two side zippered pockets, an inner envelope pocket and it can actually pack into its own pocket. And last but not least: it’s safe! The front zipper is reflective, so you can be better seen at night. Overall, it’s a great jacket to run in whether you’re facing a little autumn breeze, chill or some light rain!