I’m definitely not the first FBG to hit up an Orangetheory Fitness class. Crystal did it way back when, and Jenn tried it out a year ago.

And, of course, both of their descriptions of an ass-kicking HIIT workout that left them pouring sweat only made me really, really want to check it out for myself. Happily, there’s a studio a short bike ride from my new home, so last week, I summoned up a bit of courage and signed up for a class. 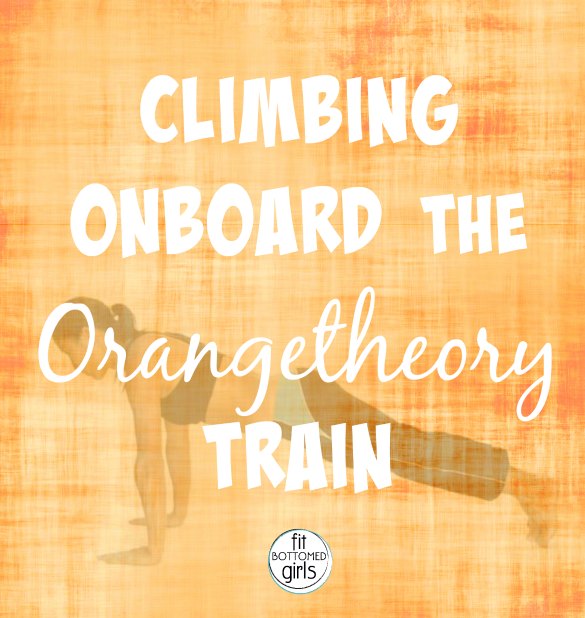 Now, the prospect of going into a class where the workouts change daily (which Jenn describes in her post — I won’t rehash the whole thing) both excites and terrifies me. I really do enjoy trying new things … once I get over the sheer terror of not knowing exactly what to expect. So, I was way beyond pleased when I walked in the door and was immediately greeted by Mike, the studio manager — he seemed to know everyone by name, and as soon as I mentioned I’d signed up for my first class, he knew mine as well, I guess via process of elimination.

He talked to me about OTB and the goals for each class — basically, how they use intervals to get our heart rate in the push (or “orange” zone) for a set amount of time, sometimes getting us into the sprint (red) zone, and bringing us back down to the base (green) zone. A few minutes before class started, Coach Stephanie came out to “grab the intro” — that was me — and break everything down in the actual studio. She made sure I was familiar with the treadmill and rowing machine, explained how my HR zone would show up on the TV screen and even explained what some of her cues meant, like if she said, “Kristen, two more!” it meant that I was two percentage points away from my goal heart rate zone. But, she also specified that if I was giving it what I had, I should definitely listen to my body and just ignore her.

So, basically, I really dug this place even before class started. I’m a big fan of this kind of hand holding, and they were all too ready to accommodate.

But what you really want to hear about is the workout, right?

I started off on the treadmill — we were divided into two groups and the second group began by rowing. The treadmill group started off by warming up at a base pace (something you could sustain for quite a while pretty easily), but before long, we were doing intervals of varying duration in the push pace (1-2 mph faster than base) with the occasional tryst with a sprint.

Then, we got into some inclines, and OH MY LORD. I might push myself on pace outside of a class, but I would never have kept that kind of pace on a 10% (and greater!) incline without a coach encouraging me (and counting down the time). I felt like such a badass when I found enough in my legs to kick things up for that last sprint interval.

After class, I received an email with all of my data from the class, so it’s easy to keep track improvement (and take note of which classes you find more or less challenging).

Halfway through class, we swapped with Group 2 to get in 1000m on the rower — Coach Stephanie gave us goal times, which is super helpful when you don’t really have a good feel for what your rowing pace should be. Turns out, the pace I started at was not the right one for me and I was slowing down pretty substantially by the end, but hey, I got there (and shortly after the first guy in the class finished, too!), then trotted over to the weight room to do several rounds of step ups with weights, chest flies, static lunges with shoulder shrugs, TRX triceps extensions, alternating bridge kicks, deeps squats, power push-ups, and probably a few other things that I’ve blocked from memory to ensure I go back.

Because, yeah, while I had a few moments of pure misery (what is up, rowing machine and power push-ups?), I was beaming at the end. And getting to check out my data immediately totally delighted my inner geek.

I wasn’t sure I’d be a studio gym kind of girl, but I loved the workout (no surprise there) and I really appreciated how friendly and helpful the staff was — when they learned I was new to Sarasota, they offered to put me in touch with basically anyone in the fitness community I might want to meet, which I’ll certainly take them up on! Plus, I’ve got a feeling I’m going to end up kind of inspired to mix up my own workouts with the way they change things every single day …

Have you ever joined as a member at a classes-only type of gym rather than a traditional fitness center? This is a first for me — I’ll let you know how it goes! —Kristen