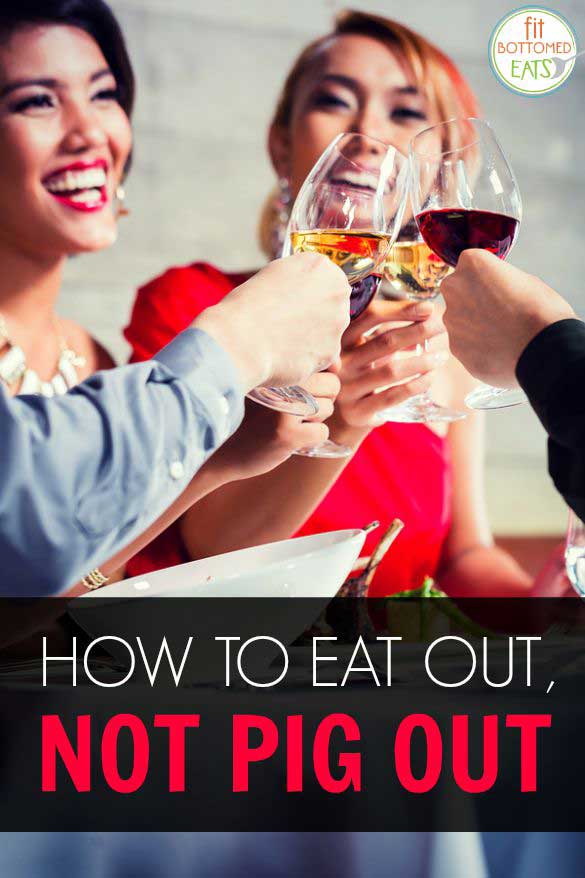 Years ago I followed a diet plan that allowed for one “cheat” day a week. On said day, one could eat anything they wanted with no limitations. Throughout the week I’d stick to the narrowly focused eating regime and forego all treats only to go hog wild on day seven. It was a merry-go-round of emotionally charged eating, for sure, and a good way to pick up the nasty habit of gorging.
Today, my eating plan has no restrictions; no food or group of foods is forbidden. If it’s a Tuesday and my body tells me it needs an extra serving of carbs or a piece of chocolate (gasp!) I go for it. My greatest indulgence is dinner out; there’s nothing like letting someone else do the cooking! Unfortunately, it’s easy to let a fancy dinner out turn into a calorie-fest.
Since not going out is not an option (life is too short to live by those kind of rules!) here are a few tips I’ve found for not breaking the calorie bank when I go out to eat.

How to Eat Out Without Pigging Out

1. Eat a small, high protein snack an hour or so before you go.
If your personal hunger scale has taken a dramatic nosedive at seven p.m. and dinner reservations aren’t until eight, don’t tough it out. A small snack will not ruin your dinner. You’ll eat slower and savor each bite more when you are not on the verge of devouring your napkin. You will also be less likely to throw caution to the wind when it comes time to order.
Try munching on a few almonds or eat a small spoonful of peanut butter before your big night out.
2. Order first.
Good intentions are easily sidetracked. Avoid being subconsciously influenced by others and place your order first. You’ll be less compelled to jump on the deep-fried bandwagon and, your healthy choice might help to steer someone else in the right direction.
3. Pick up your fork last.
When dining with a group, wait until everyone at the table has begun their meal before you pick up your fork and set it down during any conversation. This forces you to be mindful when you eat; it’s also good manners!
Research shows that we consume up to 35 percent more calories when we dine with a friend, and up to 96 percent more when we dine in a large group!
4. Spend your food budget wisely.
The people have spoken and local restaurateurs and some corporate chains have listened. Restaurants like Seasons 52 and many locally-owned eateries keep a loyal customer base coming back by offering fresh, seasonally-inspired meals that definitely don’t lack in flavor. 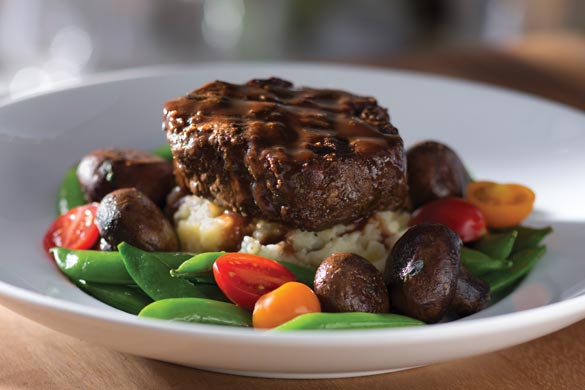 Seasons 52 Oak Grilled Filet Mignon with vegetables has only 470 calories, while another popular chain’s Cowboy Ribeye (with no side) has a whopping 1690! You decide. Credit: Seasons 52

Support those establishments that encourage healthy eating with adequate, moderately-sized portions and those who use cooking techniques that naturally enhance flavor.

Nobody needs a 3-tier six-inch wedge of chocolate fudge cake to satisfy a dessert craving. These Mini Indulgences are the perfect size. Credit: Seasons 52

Do you want to know how many calories are in your entrée? Effective December 2016 restaurants will have to comply with new legislation mandating clear and consistent nutrition information. —Karen
New Fitness
New Mamas
New Eats
New Zen
STAY IN THE KNOW
When new stuff happens, you'll be the first to know!