Headed to San Francisco and looking for a workout? Why not try running the Golden Gate Bridge? Our new writer Alex recently tried it and she’s sharing her experience today. It’s THE quintessential San Fran workout! 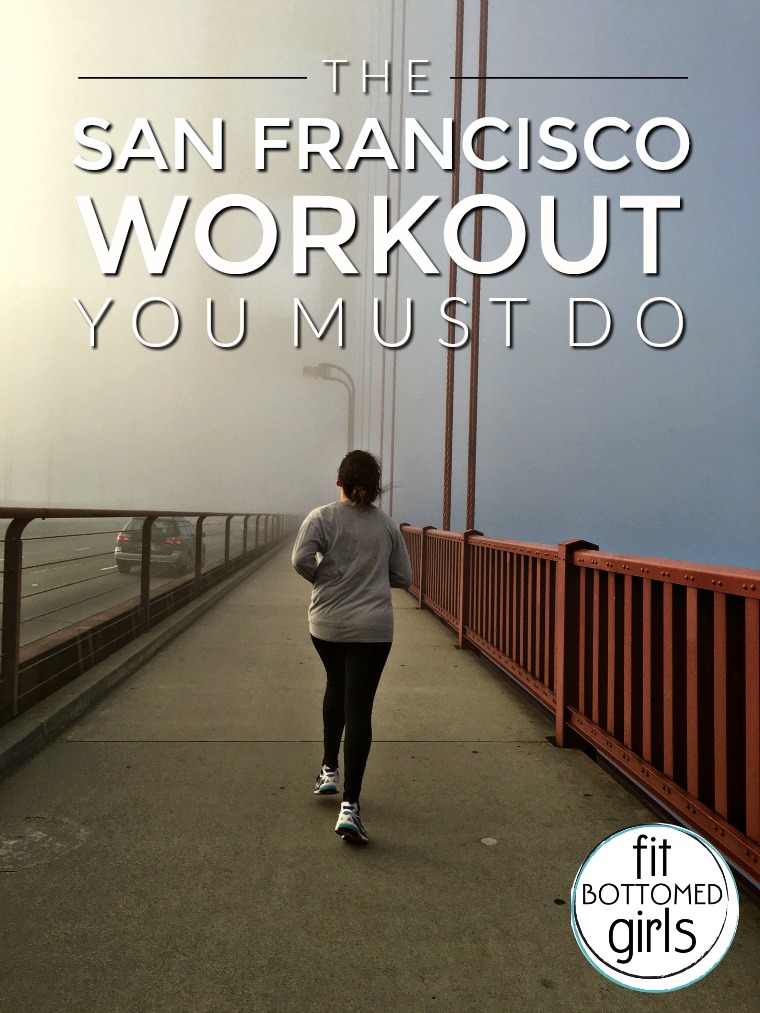 I begin a light jog across San Francisco’s Golden Gate Bridge. The bay’s cool, misty breeze strokes my forehead. The bridge spans a little over three miles if you run it across and back, my friend Kim informs me with a gleeful grin. I thought the famous bridge was only a mile (there and back). While the run is not particularly long, it becomes more challenging as the city’s insistent high-energy traffic plows across the bridge. I hear the looming blow of commercial fishing boats in the East Bay — an eerie sound reminding me of the more than 200-foot drop below me. As I run, I note the weather, my clothing, and mile markers in hopes of better expressing my experience to my fellow Fit Bottomed Girls.

What to Wear When Running the Golden Gate Bridge

California is not always warm and sunny (a belief I had before visiting The Golden State). San Francisco’s chilly fog (affectionately called Karl by locals) often cools the air making temperatures drop to 45 degrees. The city’s rolling hills may block the fog creating microclimates. The Golden Gate Bridge serves as an example of the city’s capricious environment. In the short 1.5 miles between the south side and the north (Marin County) side of the bridge, the atmosphere transformed from a hazy gray-fog to sunny blue skies. The Golden Gate influences the direction of the fog. As the bridge rises, the fog pours down, creating a mistier area. The North side of the Golden Gate is much more opportune for pictures.

The bay’s temperamental weather will not treat you kindly if you wear shorts. Halfway across the bridge, beads of moisture mixed with sweat began to trickle down my temples onto my gray long-sleeve T-shirt. My black Nike running tights provided a much-needed layer of warmth. My friend Kim dressed for a warmer climate — sporting a burgundy T-shirt and Adidas running shorts. She quickly found herself cold and numb. Despite wearing a long-sleeve T-shirt and thermo-conductive running tights, I definitely wanted a windbreaker and lightweight gloves. Layers are key in the Bay area. Bring running gear that is light, thermo-conductive, and easy to tie around your waist. Even if you do not need your jacket you will be happy to have it later in the day, especially come evening.

The Golden Gate is a suspension bridge with two prominent towers. After passing each tower there will be a lookout point making it easy to stop and view the bay. The lookout points serve as great mile markers but appear rather suddenly due to the fog. As mentioned, the Golden Gate is roughly three miles when you run it across and then back. While this isn’t a super long run, I found it a bit harder than running on a track or sidewalk, primarily due to the weather and traffic. Still, the Golden Gate Bridge is a great run/hike for most runners. If you wish to extend your run, you can keep running past the bridge for three miles — adding a total of six miles to your run (there and back).

Once you make it to the Golden Gate’s north side you will be met by the great Pacific’s rich navy blue waters with yachts sailing bellow like tinker toy sailboats. The skies on this side were much clearer. The International Orange-colored bridge is much easier to view at this end, too. The north side also offers incredible views of the Bay’s mountains.

Have you ever run across the Golden Gate Bridge? —Alex