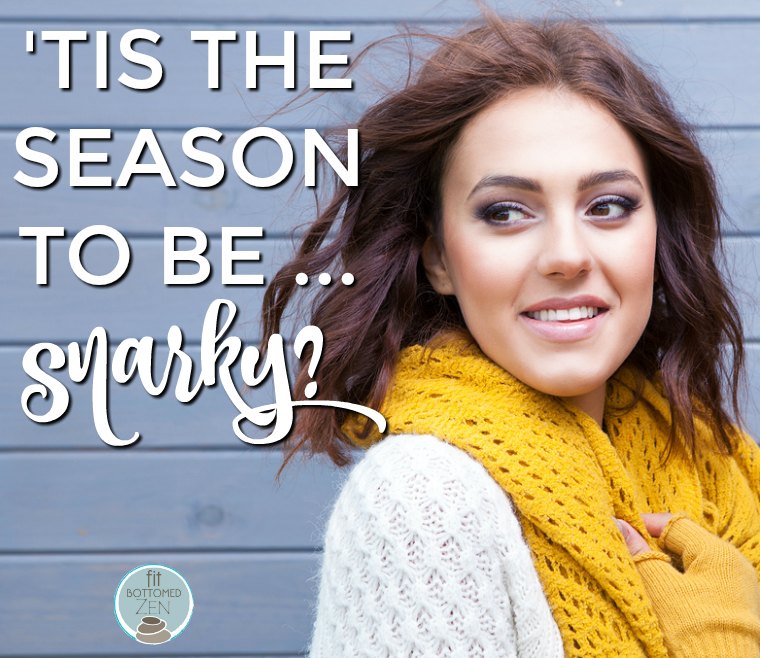 Sing it with me now:

‘Tis the season to be snarky

Oh, whoops. That’s not how the song goes. FOR A REASON.

This time of year always seems to bring out extremes. Some people are unabashedly joyful about playing holiday music the moment there’s a chill in the air, while others loudly tout their aversion to seeing Christmas trees before they’ve even finished their Thanksgiving leftovers.

It’s really, really easy to take a judgmental stance on so many things that, in all honesty, have nothing to do with us. Take candy corn, for example. Leading up to and following Halloween, I couldn’t even keep up with the posts from people sharing their snarky views on how terrible candy corn was and how people who love it should be ashamed.

Sure, it was said mostly in jest — and honestly, I’m not all that invested in candy corn either way — but … can we just take a second here and think about what the real point of taking such a stand on an insignificant issue is? Whether we’re talking about Love, Actually, holiday music, fruitcake, or any other thing that some people get really into and others absolutely don’t get … well, if someone says they love it, is it actually harmful to you if you don’t share their viewpoint?

I’m not saying we should all be into (or not into) the same things — not at all. But does making someone else feel silly (or worse) for wholeheartedly loving something you aren’t a fan of make you feel good?

I have some pretty geeky areas of my life, and I think I tend to attract people who have found their fandom. My husband’s knowledge of all things Star Wars is nearly unsurpassed. It’s not really my thing, but honestly, I think it’s hella sexy that he’s got something he’s so passionate about. My friend Lora — who happens to be one of the most badass runners and super cool women I know — has caught an absolute ton of Pokemon (Pokemons? I don’t know how to make that plural), and it’s turned out to be a super fun pastime that she shares with younger relatives who live far away. I don’t know much about Pokemon, but I enjoyed seeing her get excited about it in Oregon last year.

‘Tis the season to be grateful, giving, accepting, loving — whenever possible, at least. Because, let’s face it. We’re all dealing with enough heavy shit right now, and there are plenty of times when it’s our responsibility to speak out and stand up and refuse to allow certain topics to pass without a word.

But if we’re talking about being for or against non-traditional candy cane flavors? I’d argue that now is the time to open your mind — and even if you don’t agree with something or someone, maybe you can pause a beat and give some thought to the snarky reply on the tip of your tongue. If you know it’ll be received in jest, then cool! Rock on with your witty self. But if it veers toward being unnecessarily mean … maybe you wanna rethink that comment. I know it’s hard to hear this, but sometimes? It’s okay to just not comment.

Are you one to jump to snark at the first opportunity? I’ve definitely done it. Like, plenty. And I’ve also regretted it after the fact on more than one occasion. —Kristen