When I first tried sushi in college, I wasn’t a fan. The rolls were filled with gummy, tasteless rice, and the sashimi was, well, fishy. As someone who was pretty adventurous in the food departmentat a young age, I felt like I was a loser. Even in 2002, sushi was hip, and me not wanting to partake took my coolness down a notch, at least in my eyes. 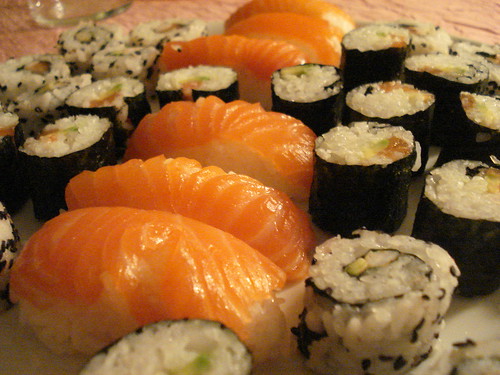 In my wise post-college years , I’ve learned two things: bad sushi sucks and it may take a time or two to “get” sushi. But once you do, oh my, can it be enjoyable. (And if you never do, it’s still cool because you’re much less likely to come down with a variety of nasty bugs and parasites by forgoing raw fish.) It may be expensive, but it’s worth it to go to the nicest or at least the cleanest place in town. And if the thought of digesting rare octopus freaks you out (or you’re preggers), stick to the rolls, which are far less scary your first go-round. My “first time” involved A LOT of rare yellowtail and eel, if that tells you anything.

Once you develop a love for it (and if you like seafood, I think you can), sushi can be a fabulously healthy meal if you stick to the right fare. As a general rule, the authentic stuff is the best. If it sounds like a frat boy named it (think: Santa Maria’s Suicide Roll, The Blur Roll or Acid Drops–all real names from real restaurants, mind you), you should probably stay away from it as they usually include more American ingredients such as mayo, cream cheese or something fried.

Sushi Game Plan
Appetizer. Go hog wild by ordering not one, but two appetizers. Edamame is my first choice because it’s really good for you, and it’s fun to eat. (127 cals, 6 grams of good fat and 4 grams of fiber in a 1/2 c. of shelled edamame). Miso soup is a close second with a yummy flavor and only about 50 cals per 1 cup.
Rolls. My faves involve spicy tuna rolls, cucumber rolls and any type with salmon (omega-3s, woo-hoo!). Most of these contain about 200-300 calories per roll, and cucumber rolls clock in at only 130 calories per roll. In addition, many sushi joints have brown rice available, upping the nutritional quality of your meal, and most restaurants are happy to decrease the amount of rice used, you just have to ask. If you’re tempted to get the higher-cal stuff, go ahead,but pick one or two rolls to splurge on and split it with a couple of pals. (I’m a total sucker for spider rolls, so if you’re going to indulge, I suggest those!)

Sashimi. Since sashimi is just rare fish over rice, ask what the freshest fish is and go with that. Fattier fish like salmon will have more calories and fat, but it’s all good stuff, so don’t worry about it; just keep your portion sizes in check. Yellowfin tuna sashimi is only listed at about 100 calories for three pieces.

Sake/Dessert. When dining out, I usually pick either sake or dessert. Some days, a good house sake does the trick and others days mochi ice cream is all I can think about. Just an ounce of sake has about 40 cals and mochi ice cream (golf-ball sized mixtures of rice starch and ice milk) has about 100 calories per ball. So, pick your splurge and savor it. 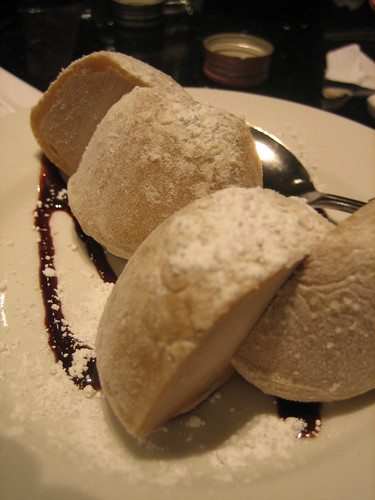 Do you like sushi? What’s your favorite fare? And, when it comes to sake vs. dessert what do you say: Sake it to me or mo mochi, please?

Sushi not your thing? Check out Erin’s review of Applebee’s Weight Watchers’ menu.