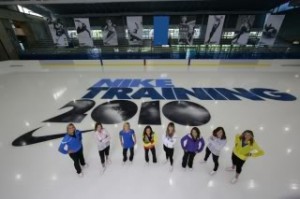 Do you remember the Nike campaign, Just Let Me Play?

It was this genius Nike advertisement featuring little girls giving convincing arguments for why girls should play sports. It was inspiring, it was emotional, and it totally drove thousands of girls out into soccer fields, basketball camps, fields and rinks.

I wanted to play sports and fitness like those young girls after watching that commercial. I also wanted to hug the mess out of whoever created that campaign. The day I watched was the day a baby Nike love seed was planted in my heart. Fast forward a couple years to the day the FBGs chose me to cover the Women’s Training 2010 Summit in Vancouver, Canada. I was sick in bed with a cold, and I literally put both my fists up in the air and did a victory dance.

I knew the Summit would rock, and I was right. The trip was nothing short of amazing. I was on a plane faster than you can say maple syrup, wondering how the heck I got so lucky. (Fitness really does throw perks in your path!)

Nike didn’t disappoint either. I was so nervous once I got off the plane, but there, like a sweet friend, was a driver with a swoosh sign ready to scoop me up and take me to my new leader. I was joined by three other awesome women from Shape Magazine, Teen Vogue and Elle, and together we all headed downtown to the Loden Hotel for some Nike debriefing.

The schedule for Wednesday was a Fit Bottomed Girl’s dream. The first event led us to the curling center to meet eight Winter Olympic athletes thirsty for gold. A Nike marketing big wig spoke with our group about the importance of Nike sponsoring and supporting women athletes. She clicked her way through countless women campaigns and schooled us a bit on how important it is for little girls to see women play. I teared up a bit. I can’t lie.

New product launches geared specifically around the suggestions of girls just like us were introduced (be on the lookout for upcoming Posh posts on this!). I can’t tell you how impressed I was with how important a gal’s voice is to the Nike design team. The company really does create new innovations with major help from the athletes that sport their stuff. They stressed listening to the athlete’s voice a lot, and I could totally tell they meant business.

Once the athletes came out, I was in FBG heaven. The women Nike chose are phenomenal women, each in their own right. Curling, skeleton, snowboarding, skiing, figure skating, speed skating as well as ice hockey were all represented on that presentation stage. It was a site to behold. As the Olympics approaches, we’ll feature some of the women’s stories in the FitStars section, so stay tuned for that. They shared workout tips as well as their motivations for going after the gold.

The next stop on our day trip was the Richmond Olympic Oval—the soon-to-be busiest hosting venue for the Winter Olympics. Twelve medal events will be held at this glorious facility starting in February. That fact alone had me walking around with my jaw hanging. We got to see awesome eco-friendly planning and design as well as some fitness facilities that made this FBG want to become Canadian. The day ended with Jennifer Rodriguez demonstrating some of her long track speed skating skills and more athlete one-on-one interviews.

The whole day was surreal. It’s not every day you meet exceptional women pushing their bodies to exceptional levels. As you’ll read in upcoming posts, these women are “sheroes” in every sense of the word. I’m sure little girls around the United States will be inspired to play once they see these women in action. I’ve never been so humbled by fitness dreams. Nike put the smack down on women’s athletic power. —Tish

Check back tomorrow for “Just Doing It, Part 2,” where Tish will share her experience working out with Nike!