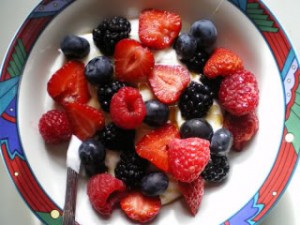 I have such an on-again, off-again relationship with yogurt. I’ll eat it daily or twice daily for a month and then, out of the blue, drop it like a hot potato. Which is dumb. Because that “hot potato” is full of good-for-your-tummy bacteria, calcium and deliciousness. Whether it’s a flavored yogurt or plain yogurt that you snazz up with some mix-ins, I have now realized that I should have never broken up with yogurt, even if it’s just for a weekend. Hopefully, yogurt will take me back.

A few months ago, we reviewed a slew of yogurts, but we thought we’d revisit the subject with an emphasis on low-fat or non-fat Greek yogurt. Greek yogurt is seriously thick, creamy and filled with protein, which makes it a perfect post-workout snack. Check out our ideas below to keep your yogurt-relationship full of surprise and nutritious excitement!

Who says plain is boring? Plain yogurt is one of my favorite things EVER because it’s like a blank canvas for your culinary desires. After a run, I’ll grab a few big scoops of non-fat Greek yogurt and top it with some berries, honey and maybe a few nuts for crunch. Other times, I’ll mix it with some chocolate protein powder for a pudding-like treat. Occasionally, I’ll even throw it in a smoothie or eat it with cereal instead of milk. The possibilities are endless…

Plain nonfat yogurt and Greek yogurt has a sour flavor to it. At first, trying it plain, I wasn’t sure how much I liked it. And then I realized that it tastes just like sour cream, except it is thicker, creamier and has fewer cals and more protein than sour cream. In other words, it kicks sour cream’s arse and then some. So the next time you want a topping for your burrito or a dip for your raw veggies, make it with yogurt, and you’ll reap the tasty benefits (and not even notice a difference)!

Sometimes when you don’t have time or are having trouble channeling your inner Giada De Laurentiis, you just need to grab a snack that’s tasty and good for ya. That’s where the pre-flavored Greek yogurts come in play. They’re portable, tasty and are offered in fun flavors. Erin and I recently taste-tested the new Chobani Greek yogurts and fell in love. Erin went gaga over the pomegranate flavor, and I developed a healthy obsession with the pineapple variety. They both taste great, and with 18 grams of protein, less than 200 calories and all natural ingredients, you can see why we loved ’em so.

I’m not gonna lie; Greek yogurts aren’t cheap (unless you’re lucky enough to have a Trader Joe’s nearby, in which case it’s much, much more affordable). However, if you’re okay with getting a little Martha Stewart in the kitchen, you can make your own! All you need is a bowl, colander, cheese cloth, a large container of plain non-fat yogurt and some time in the fridge. I would go through the steps, but this blog explains it really well (with pictures, too!), so I’m not even trying. And it totally works and tastes just like the store-bought brands. I make it almost weekly I heart it so much.