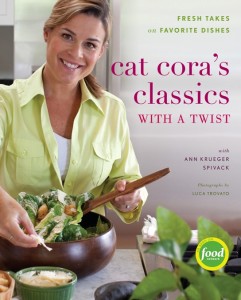 Yesterday I went on and on about Cat Cora’s awesomeness and then you gotto hear in her own words how she and her family stay so darn active and healthy. I had the chance to review her latest cookbook, Cat Cora’s Classics with a Twist, and let me tell you, it rocks.

It’s not like most of the other healthy cookbooks that we review that list out calories and other nutritional facts about each dish, but it does feature fresh, healthy ingredients. And, like Cat said in her interview yesterday, she’s very health-conscious, so it’s no wonder that the recipes she creates are, too.

I tried her Spinach Paella and the Hungarian Goulash ( which I chosebecause how often do you sit and think, “Man, I sure could go for some goulash right now” and then actually make it?!) and it is sooo tasty! Neither dish was overly complicated to make, but they were show stoppers, as I felt like I was really cooking (Iron Chef Jenn!) and not just throwing ingredients together. Plus, I felt really good serving it to my family. Sure, some of the recipes take a lot of time (why does it take me forever to cook rice every time I make it?!), but on a lazy Sunday, it’s perf!

At this point, I bet you’re thinking, man, I really want a recipe from this book to make myself. Right? Well, we’ve got you covered. Cat offered up the opportunity for us to feature TWO recipes (one here and another on Fit Bottomed Babies for healthy salmon burgers!) and we jumped. Double the fun! 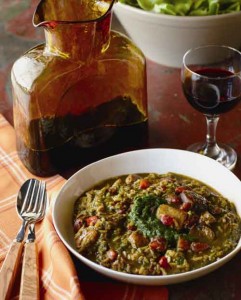 1. Heat the stock in a medium saucepan over medium-low heat, reduce the heat to low, and keep at a simmer.

2. Place the saffron in a small bowl. Pour about ½ cup of the warm stock over the saffron and let it steep.

3. Season the chicken with salt and pepper. Heat the oil in a large skillet over high heat until it’s hot but is not smoking. Add sausage and the chicken to the pan. Cook, stirring, until golden brown on all sides, 4 to 5 minutes, and transfer the chicken and sausage to a plate. Add the bell pepper, jalapeño and tomatoes to the pan, and reduce the heat to medium-high. Cook until the peppers begin to caramelize, 3 to 5 minutes. Stir in the paprika and the cumin.

4. Pour the rice into the plan and stir just until coated. Pour in 2 cups of warm stock and add the saffron and its steeping liquid. Return the chicken and sausage to the pan along with any juices on the plate, stir to combine, and simmer over medium-low heat, uncovered, until most of the stock has been absorbed, about 20 minutes.

5. Meanwhile, make the spinach puree. In a blender, puree half of the spinach with the water. Add more spinach, a little at a time. If the mixture can’t be pureed, add more water, 2 tablespoons at a time. The puree should be very thick. Set aside.

7. Then, turn off the heat and cover the pan with a lid or a large sheet of foil, letting it rest for 5 to 10 minutes. Stir the spinach puree into the paella. Taste and add more salt and pepper if you like. Transfer to a large platter, sprinkle with the scallions and cilantro, and serve family-style. Enjoy!

Want to try more of the recipes? One random U.S. reader will win the book next week. Just comment to enter! —Jenn

*Saffron ain’t cheap—in the least ($15 for a small bit!)—so if you’re cooking on a budget don’t be freaked when you find it in the spices aisle. Just remember—making it at home and having tons of leftovers is still waaay cheaper than eating it out!


**If you aren’t a big spinach fan, consider cutting the spinach and water in half. A little green goes a long way!