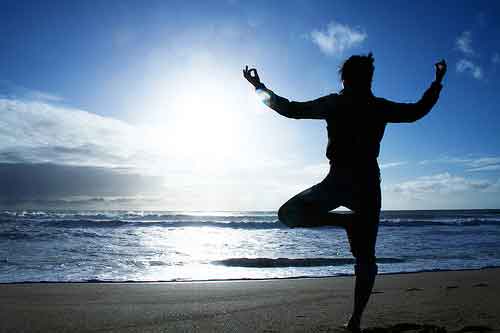 This entire week, we’re featuring select posts and articles by some of the best-of-the-best writers and bloggers across the World Wide Web as part of FBG’s first-annual Guest Blogger Week. Click here to see all of the great guest posts that inspire, make us think and crack us the heck up!

I first discovered yoga in my early 20s, when I lived in New York City. I practiced at a grungy yoga studio that reeked of incense. Hey, it was the East Village. At that time, I didn’t give much thought to taking classes. I would grab my mat, throw on my flip-flops and take whichever class fit my schedule. Mission accomplished.

Now, a decade or so later, even though I have continued to practice yoga, I’ve also become interested in many other types of workouts such as spinning, Body Pump and The Bar Method. Yet, despite all these other activities, I’ve always returned to my mat. I sound all “om,” don’t I?

Well, I suppose I should reveal some truths to my yoga practice. Earlier this spring, I read an article in The New York Times about the commercialization of yoga that had me cringing in shame. I felt as if the writer had been following me around, scribbling notes in a reporter’s notebook while I got ready for my Hot Vinyasa class.

I am obsessed with lululemon. I know it’s an expensive line of clothing but it makes my butt look great. Plus, I appreciate how the company gives back to the community by offering free yoga classes. I, too, own a Manduka yoga mat. One of my yoga teachers told me it was the best mat on the market, so it’s not my fault I believed her. I didn’t realize it was a “status” mat. I swear. I love it because it’s thick.

Even though I wear the clothes and own the mat, I still don’t feel like an authentic yogini. Why, pray tell? Well, for one, my heels don’t touch the floor when I’m in down dog (the most recognizable yoga asana). I’ve had numerous teachers tell me that it’s okay. That it’s part of the journey. That perhaps it’s due to my body’s structure. Blah. Blah. Blah. I want my heels to touch the floor, for goodness sakes! Is that too much to ask after practicing for more than 10 years?!

Don’t get me started on performing an unassisted headstand. It’s been one of my goals for years to be able to do one. I feel a real yogini should be able to do that move, as well as crow pose. For at least one minute. It hasn’t happened yet. I suppose I should work on that instead of just thinking or talking about it.

One thing’s for sure. I need a tattoo. Stat. I may need two or three. It seems that many hard-core yoginis have at least few. Something else to put on my to-do list while remaining mindful and in the moment.

Before you call Shiva Rea to put me in my place, please know that I am only joking. I’m aware that yoga is a lot more than trendy clothes or being able to perform a pose perfectly. Just don’t get me to try nude yoga. Namaste! —Judie Hurtado

Judie Hurtado loves working out and trying new fitness trends. She blogs about her health and fitness adventures at www.judiesjuice.wordpress.com. Her articles have been published in magazines such as Time Out New York and Park Place.