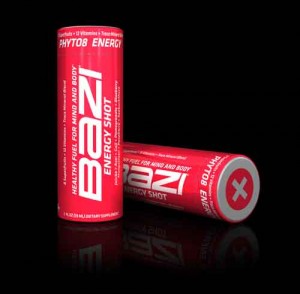 I’m not sure if it goes back to my college days or what, but it’s just really fun to shoot things. And by shoot I don’t mean firearms; I mean drinks. And by all means, they don’t need to be alcoholic to be fun (I’m more of a wine sipper, anywho)—I’ve been known to shoot pomegranate tea or aloe juice. It’s just fun. So when Bazi asked us to try its “healthy” energy shot, I was game (even if most energy drinks do freak me out). It’s all about trying stuff for you guys! And, again, I can’t turn down a shot.

Although the taste of the stuff was a bit like overly sugary Tang, I did like that Bazi wasn’t like other energy shots and didn’t have excessive caffeine, sugar, B vitamins, taurine and other artificial stimulants in it. Instead, the fruit-based formula is made with a mix of jujube, blueberry, pomegranate, goji, mangosteen, raspberry, açaíand seabuckthorn juices and has about 20 calories in its two-ounce serving. I tried my first shot after feeling particularly tired one afternoon, and it did perk me up a bit. Didn’t feel a crash either, which was nice. On another day, I took one before an early morning run, and it definitely woke my legs up sooner than usual.

While I’ll always prefer to get my energy from whole foods, getting enough sleep and loving life, in a pinch, this stuff is far better for you than the other energy shots on the market today! —Jenn