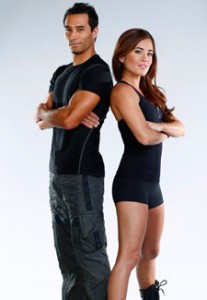 The Biggest Loser has definitely shocked me from time to time, but last night? That was a whole new level! With some pretty obvious game play (you don’t both accidentally gain nine pounds!) and the unveiling of the two “unknown” trainers, it was an eventful two hours on Twitter.

First, don’t even get me started on the black team who obviously wanted to go home. The anger I feel at someone wasting an opportunity to be on a show like that was only lessened by Dan’s impressive weight-loss at home. Whew. And what do we think of the new trainers Brett Hoebel and Cara Castronuova? Well, we haven’t seen a lot of them, so I’m not ready to totally make a verdict, but both are smoking hot and seem to be bringing a harder edge to the show. I imagine the producers had something to do with that, but it’s interesting. And they’re obviously getting results. So, we shall see. As long as they don’t take too much camera time from Bob, we’ll probably be okay with them.

For the inside track on last night’s episode from cutie-patootie and BL 10 at-home winner Mark Pinhasovich and more info on the new trainers, check out the videos below from our pals at DietsinReview.com.

Can’t see the videos? Click here for all The Biggest Loser recap details!

What did you think of last night’s episode? —Jenn