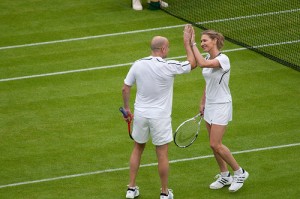 Wimbledon is in full swing (get it? Ha!), and with it, nostalgia from years past manifests into new dreams that I, too, can be a tennis star. Sure, I haven’t played in, oh, nine months and my serve is rusty, but why should I let that stop natural talent like me? By golly, with just a few practices and lessons, I’ll be kicking 18-year-old tennis ass all over the place!

Seriously, that’s what goes through my mind EVERY year I watch Wimbledon. And, yes, I do watch every single year. See, for me, Wimbledon marries a few of my loves: tennis and the English. So not only do I get to watch hot, sweaty men run around the court, but I also get an English soundtrack to give me the play by play. It’s glorious. And every year it gets me psyched to get back out on the court.

Back in high school, I played varsity tennis—both singles and doubles—and loved it. Tennis is such a mental sport, and there’s nothing more satisfying than hitting a ball with just the right spin and power to the perfect spot on the court (ideally one that’s out of reach of your opponent). Once you get into the sport, there are so many nuances that make the game just fascinating to me. And there are the hot men. Did I mention that? (The women tennis players seem to get most of the attention in the sport, but I’m telling you, ladies, tennis has some serious eye candy for us.)

Tennis for Fitness: Why It’s a Good Workout, Too!

Tennis is dang good activity, too, and if you’re looking to bust out of your workout routine, I highly suggest picking up a racket, grabbing a friend and getting your tennis on. With quick sprints, jumps, and both upper- and lower-body movements (most of your swing power comes from your good ol’ legs), an average woman can burn 300 calories in a 30-minute singles match and 185 cals during 30 minutes of doubles. Plus, it’s a great way to get outside and enjoy some summer air. Just be sure to slather on the sunscreen and take water as the temps in June can get hotter than Andy Roddick’s serve on a hard court. (And in case you know nothing about tennis or Roddick, that’s hot.)

For the next week, I’ll be watching all the Wimbledon tennis I can get my eyeballs on. I’ll listen online at work (again, the English accents) and every show in my DVR will be put on hold to “watch the yellow fuzzy thing be batted around,” as we cleverly call it in my family. Once I’m done watching, I’ll get out on that court and revisit my glory days from high school when I ruled the game (or at least my small school conference). That is, until I’m hearkened back to the reality that I really need to practice. And learn how to serve a ball over the net again. But all I need to do is find a league to practice with and get in some tournaments, I tell myself.

Then, I’ll really be the next Serena Williams.

And that’s when the dream starts all over again. —Jenn