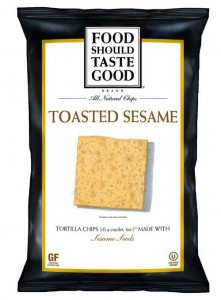 Perhaps the best-named company ever, Food Should Taste Good (really, who can argue with that?), recently sent us a few bags of its chips to snack on. And the verdict? Delicious. With salsa, dipped in black-bean hummus, on their own…they’re just good. Like really good.

A mix between a tortilla chip and a cracker, Food Should Taste Good chips are gluten-free, kosher, vegan and all-natural. Made pretty much just from corn and sesame seeds (unlike these beanie-weenie chips we also adore), we particularly loved munching on the Toasted Sesame variety, which has about 150 calories, 8 grams of fat (only one of those is saturated), 3 grams of fiber and 2 grams of protein in each serving. A serving is eleven chips, and thankfully they’re thick and hearty enough that—unlike most chips—they actually fill you up.

We also noshed on Food Should Taste Good’s White Cheddar chips, and while I’d never call myself a cheese-potato-chip gal (I’ll go barbecue or salt-vinegar every time), these were almost good enough to make me start playing for the cheddar-potato team. Almost. A mild-cheesy flavor that seems more classy than nacho cheese and doesn’t leave yellow “flavor” on your hands, these went over well at FBG HQ. And with a similar nutritional profile to the Toasted Sesame chips, they’re a snack that you have to be aware of portion control when eating, but you won’t ever feel like you’re eating junk food. And we love that about both flavors.

After all, food should taste good! —Jenn