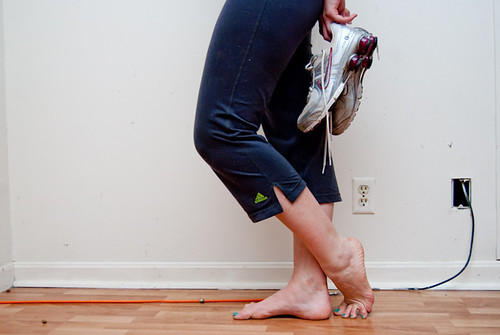 Becoming a runner one step at a time. Credit: laura dye

We get so many inspiring emails from readers, and today we’re sharing another reader success story with you! Read on for Brigid McCarthy’s inspiring story on becoming a runner. And feel free to share yours!

I used to be one of those pedestrians who would gaze enviously at the runners in my neighborhood, making comments like, “Ugh, running.” Correction: I still am one of those people. While I’m making my lazy self become a runner, I’m envious about the fact that they make it look so easy. So, I’m working on it!

I’ve always been active. I played sports throughout high school and college and getting exercise has never seemed like a chore to me. Running, however, is a different story. Whenever the coach had us line up along the base line, my stomach would sink. I’m not bad at short distances—I was always one of the fastest kids in the base-run competition in my little-league field days. But longer distances that require endurance? Forget it.

After I graduated college and entered the “real world,” I knew my old lifestyle wasn’t going to cut it. I had put on some weight in college (by senior year the “weekends” were Wednesday through Sunday, five days of binging and boozing) and was going to have my first desk job. Sitting for eight hours a day didn’t bode well for my waistline. But more importantly, the indifferent attitude I had toward runners my whole life was a lie. I wanted to be a runner. I just didn’t think I could become one. I thought runners were born with some intrinsic trait in them that allowed them to pound the pavement with ease and assurance—not made that way through time-tested resolve, battling the treadmill and the elements day after day.

My sisters and I were planning a visit home back in March and realized that it coincided with the Shamrock Run, a four-mile race around our old neighborhood. I had done this the previous year, when I lived at home, and my finishing time was atrocious. I started out running, and ended up walking most of it—which is nothing to be ashamed of if you don’t work out all that much—but I frequented the gym five to six times a week. Why couldn’t I run for more than five consecutive minutes?!