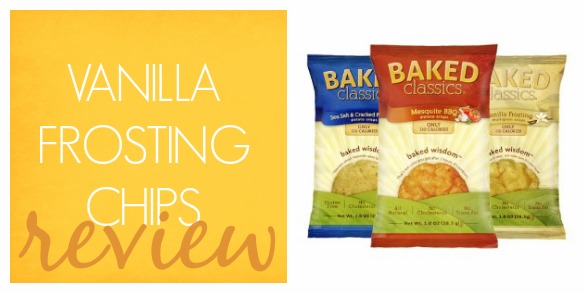 There seems to be a certain predictability in chip flavors: sour cream and onion, barbecue, cheese, ranch, salt and vinegar. But vanilla frosting as a flavor? SIGN ME UP.

I know, chips that promise to taste more like dessert than potatoes sound weird. (“Weird” was the first thought in my head when Classic Foods asked if we wanted to try them.) But let me tell you one thing: Baked Classics Popped Crisps in Vanilla Frosting don’t taste weird at all. They tasted like cupcakes. Delicious frosted cupcakes—that are a little airy and crunchy.

A single-serving bag of these popped potato and multigrain crisps (similar to Popchips) have about 110 to 120 calories of crunchy munching in them. Not to mention that they’re all natural, with no cholesterol, no trans fat, no saturated fat, no preservatives, no MSG, no high fructose corn syrup, and are gluten free and Kosher certified. While they don’t have a ton of nutritional value, they certainly don’t have a bunch of bad stuff in them and are a huge improvement over your usual full-fat chip.

Have you tried these Vanilla Frosting chips? Would you? We love! —Jenn