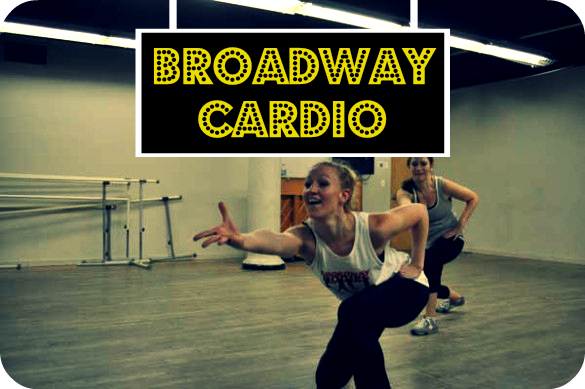 I recently took a few hours off mom-duty to head into NYC to kill a couple of FBG birds with one stone. I hit up the Artistry beauty lounge at Fashion Week, and then with a full face of makeup, headed to check out a Broadway Bodies class. Note to other class participants: I don’t typically hit the gym wearing that much makeup.

The Broadway Cardio class didn’t throw any punches, and the name is a dead ringer for what it is: dance cardio set to show tunes. If you’re a fan of musicals, this would be the class for you. Not only do you get to hear a mishmash of various tunes through the first half of the class, but then you also get to learn a dance to a song and really “perform” with pizazz. *Cue jazz hands.*

I wasn’t feeling very well during the class (an unfortunate pregnancy side effect), so even though the moves were fairly basic—jazzed-up box steps, kicks, grapevines—I kept getting lefts and rights mixed up. Ah, who am I kidding? That happens even when I’m in top form. The moves really were easy to follow even if you’d never know by watching me. And the instructor, Molly Tynes was sufficiently encouraging—I’d get “You can do it!” grins, which is always good for a class newbie. 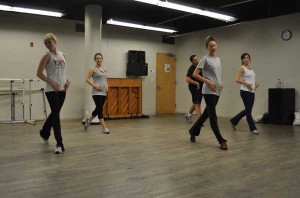 Strutting their stuff to “Luck Be a Lady.”

The fun really started when we learned the dance to the song of the night, “Luck Be a Lady” from Guys and Dolls. I really enjoyed getting to ramp up the Broadway vibe with dramatic swaggers and dancing rolls of the dice. By the end of the class, I felt like I’d had an hour of fun, not an hour straight of cardio.

If you like dance cardio, Broadway Bodies has tons of really cool classes. Broadway Zumba, a Pop Charts workout, a Glee-based class, and even Michael Jackson Mondays. How fun is that? If you’re in NYC, go check them out! Who ever said cardio couldn’t be a blast? —Erin