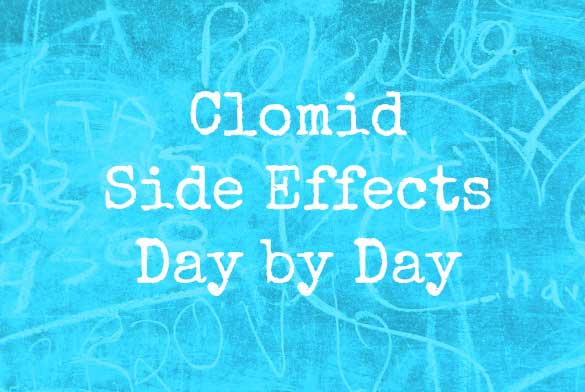 Ya’ll should be glad I’m writing this post now. Because right now I feel pretty good, hopeful and, well, sane. Talk to me in a few hours though and you might just get an entirely different Jenn. Why? Because I just took Clomid for the first time. And the side effects—for me at least—have been up, down and all around.

I thought it would be “fun” to keep a Clomid side effects journal of sorts. Turns out, the joke was on me. Here’s a play by play of my experience! (And note that I took Clomid from cycle days three to seven. While the worst side effects were felt during those first five days, I had plenty of the crazy after—especially when it was combined with more anxiety-producing doctor’s visits.)

Clomid Side Effects Day by Day

Day 1: After waiting to start my period so that I could start Clomid, I’m almost giddy today at the excitement of actually finally getting pregnant. I’m still on my period, so I have mild cramps now and again, but I’ve been nothing but happy today. Okay, maybe a little overly sentimental, as while walking around the neighborhood I thought about walking with my future kids, and I happily teared up at the idea. Then, a little later in the day, I was listening to a Smashing Pumpkins song that reminds me so much of meeting my husband in college that I happy-cried again. And despite really, really wanting to listen to The Bodyguard soundtrack this afternoon (guilty pleasure, what can I say?), I decided it best to not tempt the Clomid with the Whitney Houston.

Day 2: Woke up super excited again, and then my mood quickly shifted to big-time cranky pants. I have been super annoyed by little things. Like the sirens being tested today at noon? Rage producing. Afternoon into the evening, a commercial could make me cry, which isn’t uncommon but isn’t commonplace either. And my desire to work? None whatsoever. Although that may have more to do with working long hours and it being gloriously springy outside. Oh, also bloated and extra hungry today. Grr.

Day 3: After mood swings yesterday, I spent most of the day feeling tentatively normal…but waiting for the crazy. I’m still bloated yet am happy to report that my hunger is back to normal. Feeling a little on edge and not quite myself, but the real mood swing came around 5 p.m. when I had a random crying outburst and a general poor-me feeling that “We’ll never have kids,” over and over. A bit over-dramatic. A bit.

Day 4: Despite having a hot flash (my first on Clomid!) in the middle of the night and waking up in sweat, I slept great and woke up feeling great. Fast forward to lunch where I made the mistake of watching Parenthood. Gets. Me. Every Time. Triggered bawling. Thankfully, it was short lived. I had some slight stress/rage-out in the afternoon, but then I was pretty normal for the rest of the night. I’ll take it!

Day 5: Happy it’s my last day taking Clomid, and feeling good thus far. Warm and tingly down there. A good sign of growing eggs? Hmmm. Keep telling myself to “not over-think it…”

Day 10: Um, not normal. Back to crying. Nervous for my appointment tomorrow that will tell us how my body is responding. Headache. Oh, ouchy headache.

Day 11: I’m not sure how much I can blame Clomid side effects for this one, but cue complete breakdown No. 1. I’m frustrated, angry, depressed and just everything all at the same time. Lots of crying. Appointment shows some progress, but not ready to ovulate yet. More headache. Another couple of hot flashes that night.

Day 13: Complete breakdown No. 1 doesn’t have anything on today. The doc says Clomid is still making my hormones run amok making me nutters, and I have a full-out angry-at-the-world/I-might-as-well-plan-my-child-free-life-now outburst. It involves, yelling, crying and staring into space with the reality that I am unable to have a child without drugs and medical help. Sigh. Thankfully, after all of this, my appointment shows progress and that we might have a chance to “try” this month. Finally. I’m flooded with a sense of relief.

The rest? Well, that remains to be seen. Throughout all of the Clomid side effects, I really felt like I was on an emotional roller coaster and most definitely an emotional detox. It was like I was a teenager again—minus the insecurities and the constant desire to sneak out of the house to make out with my boyfriend. I had feelingscome out of me that have probably been waiting there for months, if not years. They all just bubbled up and out through crying spurts that rocked me to my core. Almost as if layer after layer, walls I’d built up over time started to erode. So much so that I had no choice but to be vulnerable, raw and almost beaten down.

But after every emotional event passed (almost as soon as it came—until those last few), I did feel better and more real. And in the process, I’ve learned a great deal about myself. I do want children. I will go through what it takes to do this. And it’s okay to let other people support you. It’s okay to be real and yourself, even when that self is hurting like an overemotional mo-fo.

And I think my husband summed it all up best when he said: “If you’re this emotional from the Clomid, then obviously it’s working, right?” Heck, yes. Fingers crossed that this crazy ride is coming to a close—so that our new ride can begin.

For those who have been in this situation, what type of Clomid side effects did you have? Did you become highly emotional, too? And were you—in a twisted sort of way—kind of glad you went through it? —Jenn