When I first woke up on Sunday at 6:15 a.m., I thought it was the worst idea ever. Why on earth did I sign up for the Merrell Down and Dirty Mud Run again? An hour’s drive away? When I could be sleeping after only getting five hours of sleep because the kids were tag teaming me in the 1 o’clock hour? But once we all got out the door, I started getting excited.

Me. Excited for running? In the mud? I was seriously going bonkers from sleep deprivation.

But as you know if you’ve ever done a race, let alone a mud run, it turned out to be so much fun. The crowd was enthusiastic, and that enthusiasm is contagious. We arrived at Pelham Bay Park in the Bronx around 8:30, an hour or so before my 5K began. I hit the media tent for some coffee and to drop off my bag, and started getting nervous when I saw the rope wall, the rock climbing wall and the mud pit. What had I signed up for?

But my hubby and kids were there to cheer me on, and can I just say what a trooper my husband was? 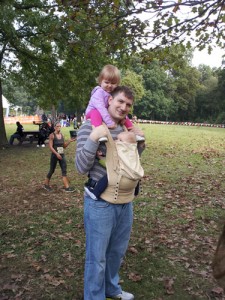 Babies on board! At the end of the day, he felt like he’d done the run too.

I couldn’t remember what pace I’d signed up for, so I hopped into the 12-minute mile group. Turned out it was pretty spot on. 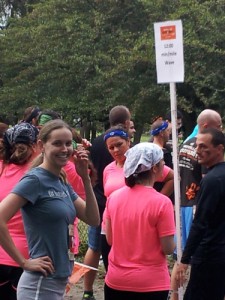 I had the nervous jitters before the run, but once the blow horn blew, I was off to the races (har). The race started along the boardwalk—nice, paved surface—before heading into the woods for some trail running. Meaning, you best watch your step or you could easily turn an ankle on a rock or tree root. It kept me mentally occupied because I had to plan several steps ahead.

I managed to slow-run the whole time with no pain, so I considered that a victory in itself. And the obstacles thrown in were great because they gave you a second to stop running, which for me is always welcome. Walls were scaled, tunnels crawled through, cold mud pits conquered. There was one fun rope wall with a slide on the other side that gave you a bit of a momentum boost as you flew off of it. At one point we had to stop and do 10 push-ups, of which I did real ones, thankyouverymuch. In the final stretch, we had to run on the beach and wade waist-deep through the chilly Atlantic.

My husband planned to hit a nearby playground with the kids during the run, so I wasn’t sure if he would be there to see my finish, but I was pleasantly surprised when I came down the home stretch and saw them. 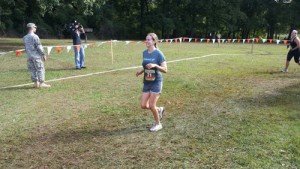 I don’t look that dirty yet because the ocean had washed off the first mud pit!

I was probably most nervous for the climbing wall, but I scaled that sucker with no problems. 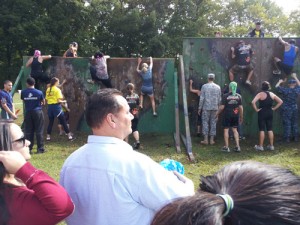 After the climbing wall came the toughest wall. It was slippery and you had to jump to grab a rope and pull yourself up and over. 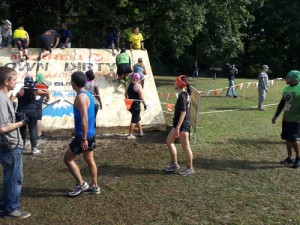 And then, the cold, watery mud pit. 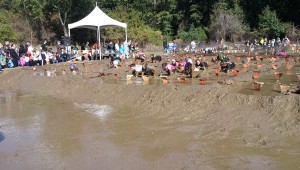 I made the mistake of turning my head to the side and dunked the side of my face and hair in the mud. 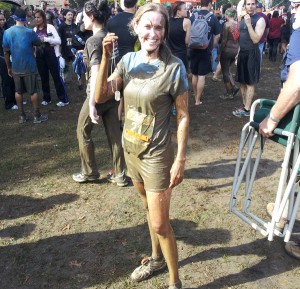 After I was done I headed over to the hoses to wash off. It was a bit chilly, and took a surprisingly long time to wash the mud off. I kept thinking “Where is this mud coming from?” Once I was clean-ish, I got some clean, dry clothes on and headed home for a shower that was on par with showers taken after skiing and after childbirth (aka the best showers ever).

Remember how I said my 12-minute pace was spot-on? I finished in 39:52, which I was totally happy with considering the obstacles and the running challenges I’ve had training for my upcoming 10K. Plus, the sense of accomplishment felt great.

I was a bit sore yesterday and my knees and elbows were a little scratched up from the army crawling. But I consider them badges of honor!

Have you ever done a mud run? What was your favorite obstacle? —Erin