Today’s special guest post is from Brandi Koskie at DietsInReview.com and the celebatory Chocolate Pomegranate Cupcakes recipe and photos are by Dana Shultz, adapted from My Little Celebration. We are sooo drooling over it—and think you will be, too!
The Statue of Liberty was a gift extended to the American people by the French. Once the statue arrived in New York City, it would sit for another year waiting for a pedestal before assembly could begin.
When we learned that our long-time friends, the Fit Bottomed Girls, were taking their love of food to new heights with Fit Bottomed Eats, we wanted to extend a gift to them as profound as the Lady Liberty. We think a cupcake is comparable. Besides, from start to finish it won’t take a year to enjoy these little treats! 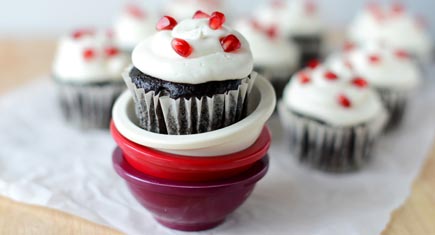 We really wanted to celebrate the launch of this new site, and we were also just in the mood for some darn good and better-for-us cupcakes. So we created an exclusive recipe just for all the fit bottoms running around over here. There are no tour guides like you get on Ellis Island, but we will give you explicit instructions on how to create this edible monument to web-based friendship.
These cupcakes are not only beautiful (I mean, just look at them!), but they are also crazy moist, rich and indulgent. It’s pretty much everything you can ask for from a 1/3 cup scoop of batter. The most exciting part—they’re sweetened and flavored with pure pomegranate juice! It’s such a bright surprise when you take that first bite. Of course, it’s hard to miss the tops adorned with the most natural sprinkles we could find—arils, or pomegranate seeds!
The cupcakes themselves are vegan, made with vanilla soy milk, pom juice, apple sauce, cocoa powder and vanilla. The frosting, made with your choice of neufchâtel cream cheese or Babybel original cheese, is not vegan. However, vegan cream cheese is a thing, and you can grab that if you want.
Our frosting is everything you want from a thick cream cheese frosting and free of any junk ingredients that typically weigh it down. We only use cream cheese, vanilla and honey, and you’ll be amazed at how simply sweet and delicious it is.
We hope you enjoy these cupcakes as much as we did making them for our friends Jenn, Erin, Kristen, Tish and all the FBGs! They are the perfect celebratory dessert—so cheers to Fit Bottomed Eats!

Yields 11-12 cupcakes
Ingredients
1/2 cup light vanilla soy milk
1/2 cup pure pomegranate juice
1 teaspoon vinegar (apple cider or white)
1/2 cup granulated sugar or Truvia baking blend
2 tablespoon canola oil
2 tablespoon unsweetened apple sauce*
1.5 teaspoon vanilla extract
1 cup unbleached all-purpose flour
1/3 cup cocoa powder
3/4 teaspoon baking soda
1/2 teaspoon baking powder
pinch salt
Frosting
8 ounces (1 cup) 1/3 fat cream cheese or Babybel Original Cheese
2-3 tablespoon honey (depending on preferred sweetness)
1.5 teaspoon pure vanilla extract
Directions
1. Preheat oven to 350 degrees F and line a muffin pan with paper liners. Whisk together the soy milk and vinegar in a large bowl. Set aside for a few minutes to curdle.
2. Add the pomegranate juice, sugar, oil, applesauce and vanilla extract to the soy milk mixture and beat until foamy.
3. In a separate bowl, whisk together the flour, cocoa powder, baking soda, baking powder, and salt. Add in two batches to wet ingredients and beat until no large lumps remain (a few small lumps are fine).
4. Pour batter into liners, filling 3/4 of the way full. Bake 20 to 22 minutes. A toothpick inserted into the center should come out clean.Transfer to a cooling rack and let cool completely.
5. To prepare the frosting simply beat the cream cheese or Babybel until fluffy. Then add honey and vanilla extract to taste and whip until well combined.
6. Frost the cupcakes by either piping or spreading with a knife. Top with a few pomegranate arils. Store in an airtight container to keep fresh for up to a few days.
Estimated nutrition per cupcake: 147 calories, 3 g fat, 173 mg sodium, 21.9 g carbohydrates, 14 g sugar, 4.5 g protein
*The addition of applesauce gives these cupcakes a slightly denser texture. If you prefer a fluffier cupcake, omit the applesauce and instead add 2 additional Tbsp of canola oil.
Try 13 Healthier Breakfast Recipes in our Baker’s Dozen eCookbook, including these Apple Cinnamon Streusel Doughnuts.
Photos and Recipe by Dana Shultz, adapted from My Little Celebration
A big thanks to the whole DietsinReview.com team for the fabulous celebratory recipe! Check out more of their delicious content with these 13 Healthier Breakfast Recipes in their Baker’s Dozen eCookbook, including these Apple Cinnamon Streusel Doughnuts.
What kind of food do you like to celebrate with? And, dude, how good is chocolate and pomegranate in cupcake form?! —Jenn