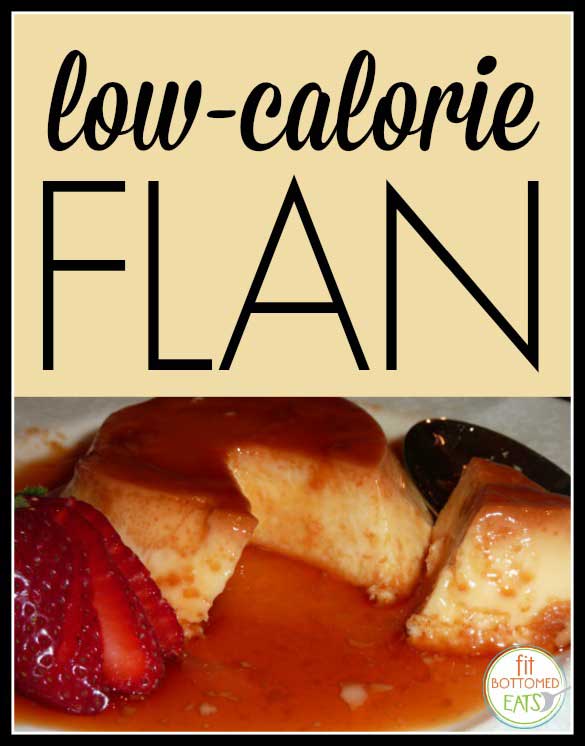 Culinary aficionados predict that 2013 will bring about the demise of the ever-popular cupcake and the rise to fame of the humble flan. There are many variations of this classic Spanish favorite, however, most recipes use heavy cream or half and half to achieve the creamy custard. A typical serving can easily top the charts at more than 500 calories and 23 grams of fat!
Not to despair, Recipe Revamp to the rescue. With just a few changes, we can all enjoy a classic flan without consuming approximately one-quarter of our daily allotment of calories and half the required fat in one sitting!
For authenticity, I chose to use the Mexican namesake of sweetened condensed milk, La Lechera, and Mexican vanilla, but feel free to use whatever is handy. In make this healthier, vanilla coconut milk was substituted for the heavy cream or half and half. While the calorie counts will vary depending on what ingredients you go with, by subbing the coconut milk for the cream, you’re basically cutting the calories in half—if not more. Which is awesome because a typical serving of flan has about 300 calories.
The following vanilla flan recipe will make eight individual servings. You can easily cut it in half and save the La Lechera in the fridge for up to two weeks for more low-calorie flan-making adventures. Oh, and don’t be intimidated by the caramel sauce, it looks more difficult than it really is—just keep stirring and work fast. 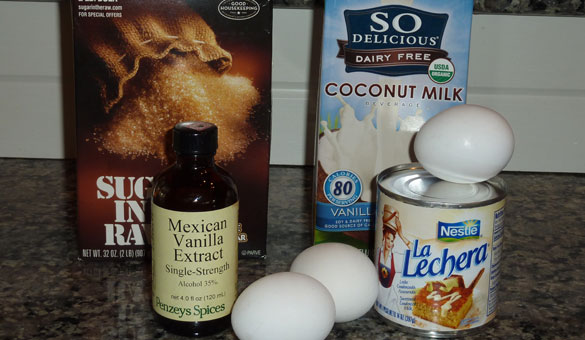 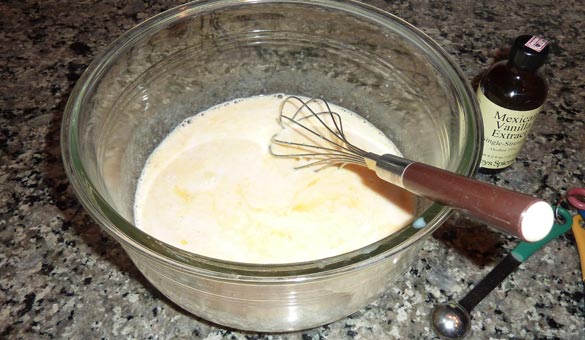 Now the fun begins. Measure 12 ounces natural cane sugar and place in a heavy medium saucepan (do not use nonstick). Shake to even out the thickness. Cook over medium heat WITHOUT STIRRING until the edges start to melt and spots in the middle of the pan become clear and start to bubble. This will take about 5 to 6 minutes. 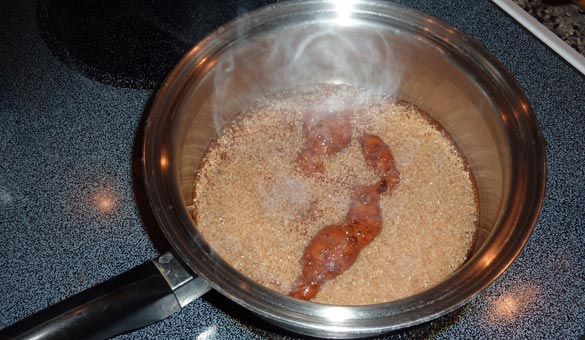 Stir until all the sugar dissolves, and the syrup turns deep amber. Stirring constantly, add half a cup of water—the mixture will bubble. Keep stirring and continue cooking until caramel is smooth and thick—about 1 to 2 minutes. 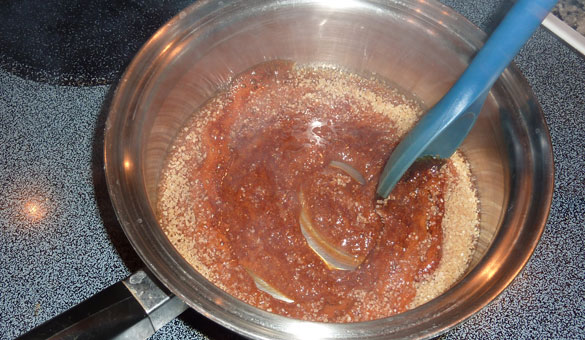 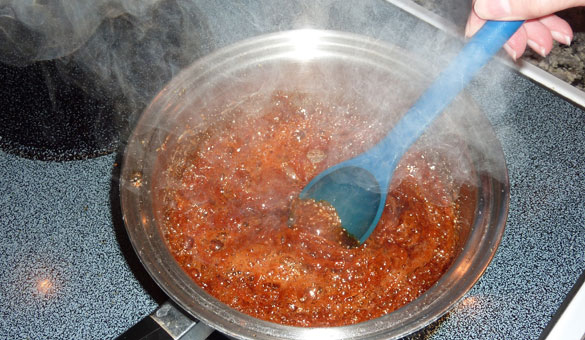 Divide caramel among eight ramekins. Tilt and rotate each cup so that the hot caramel coats the bottom and partially up the sides. This tastes great at this point, but you will be sorry if you try it—nothing burns like hot sugar! 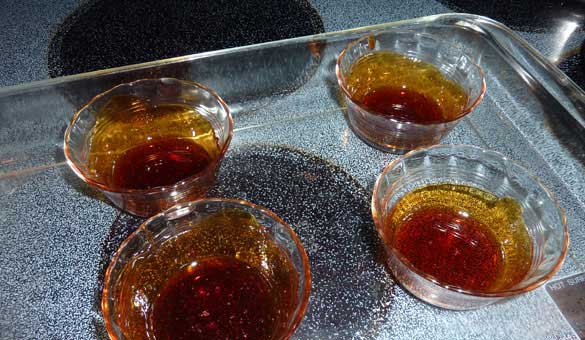 Pour prepared custard into the caramel lined ramekins. Arrange filled ramekins in a baking dish and place on the oven rack. Add enough hot water to the baking dish to come half way up the sides of the ramekins. (FYI: This is called a water bath or bain-marie in fancy French culinary terms.) 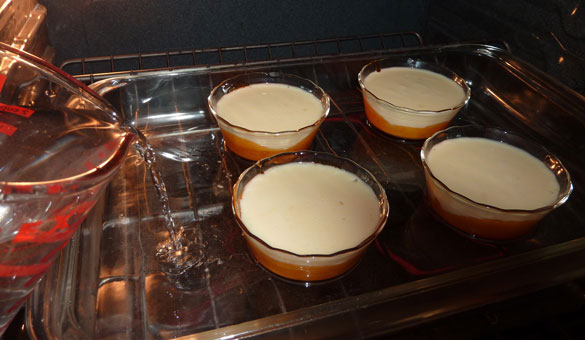 Bake for 45 to 50 minutes until set. A knife blade should come out clean when stabbed in the center. Remove from the oven and cool to room temperature. Place in refrigerator for at least four hours. 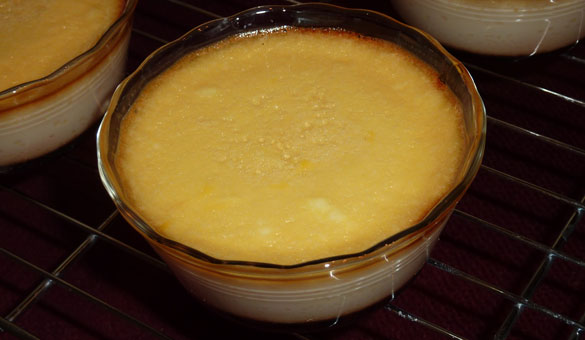 Remove individual flans from the refrigerator for 20 minutes before you are ready to serve. Run a knife blade around the outside edge to loosen. Place a serving dish on top of the ramekin and invert. The flan should slide right out, and the caramel sauce oozes down the sides. 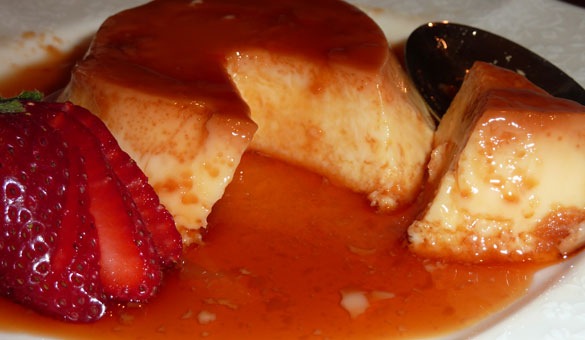 The first four disappeared pretty fast, so I mixed two tablespoons cocoa with the remaining La Lechera and substituted Kahlua for the vanilla to test the versatility of the low-calorie flan recipe. Wow! 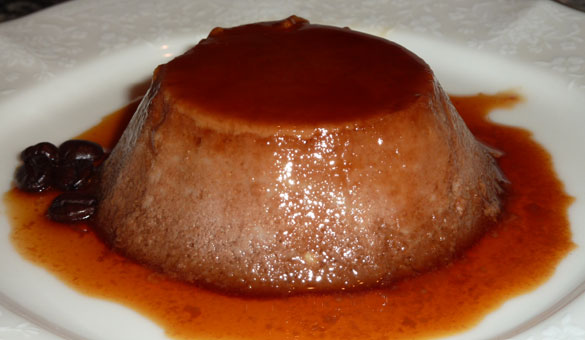 Far more sophisticated than a cupcake, served with fresh berry compote or jazzed up with your own favorite flavors, this delicate dessert will be your go-to sweet-treat recipe for the year!

Have you ever made this dessert before? Will you try our lower-calorie flan recipe? —Karen