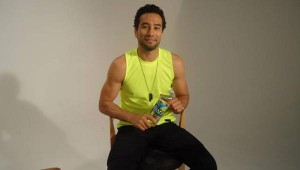 How do you like your The Biggest Loser trainers? If a smart, energetic man with smoldering good looks is your thing, then you must have had the hots for season 11’s Brett Hoebel. I recently met Brett on the set of a video shoot where he was filming segments for resource Resource Natural Spring Water in New York.

The media gig meant that the New Jersey native (who went into fitness training after deciding against med school) was able to come back to the East Coast and have a little fun while promoting a few things; he is definitely excited about the whole thing right now.

Resource was the ideal project for Brett to participate in, he says, as he is very passionate about people staying hydrated when they work out. (He told me many Biggest Loser participants made the mistake of withholding water in the misbegotten idea it would prevent “water weight.”)

The son of a Princeton professor, Brett showed me how much he enjoys explaining things by pointing out that spring water naturally contains electrolytes, which are important when you work out at a high level. Another selling point for him: the Resource bottles are also 50 percent recycled plastic and 100 percent recyclable, making them a more ethical choice for ecologically minded folks. 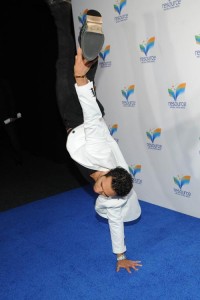 Brett, who now lives in LA, is also very excited for his upcoming indoor cycling classes at Flywheel Sports in Los Angeles. As a fellow instructor myself, we bonded while talking about the important of the perfect playlist. He also mentioned that he feels that every class should have three Ms: Movement, Music and Mantra. Brett is big on personal mantras — “they are my medicine,” he says. Brett’s ultimate dream is to be “the Tony Robbins of fitness,” and he appears to be well on his way!

Unbelievably lucky enough to also get invited to a party for Brett that night that included, of all things, flying acrobats, I was a little embarrassed to explain to him that I had a previous “girl’s night” plans and could not break them — even for the most tempting invitations. Being the fun guy that he is, he promised to make sure I got a photo performing one of his one-handed handstands on the red carpet — and he did just that!

Do you have any personal mantras? Mine is “you can deal with being hot and tired LATER.” Share yours! —Margo