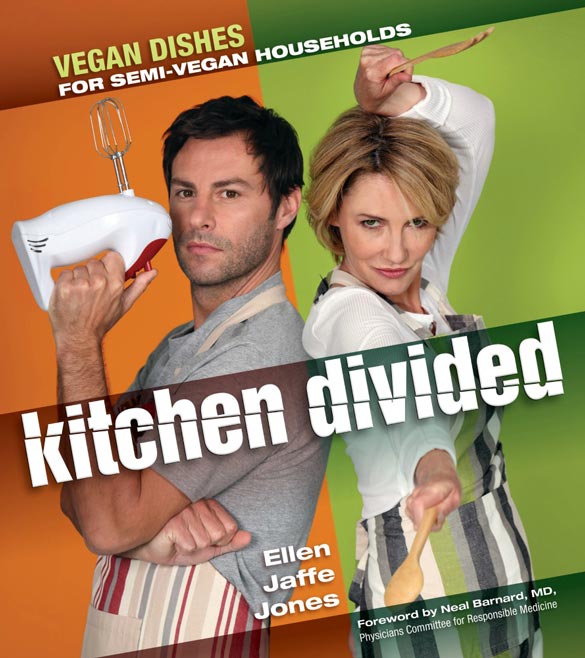 No more fighting in the kitchen with this cookbook!

It’s a tale as old as time: Boy meets girl, boy falls in love with girl, boy and girl argue about tofu.
Or is that just in my house?
For the most part, my omnivore partner is supportive of my plant-loving ways — after three years of cohabitation, he’s finally stopped wrinkling his nose at my coconut milk next to his 2-percent milk in the fridge. He’ll come with me to the “hippie health food store” to pick up chia seed and vegan protein powder for smoothies. He’ll even steal bites from my veggie tacos when we hit up our favorite Mexican restaurant. But his support ends where his dinner plate begins — though completely cool with my no-meat lifestyle, sometimes he wants a steak on his plate.
I know I’m not the only one in a “mixed” relationship. With only 4 percent of the United States population identifying as vegetarian or vegan, many herbivores end up finding love, happiness and vegan wedding cake with the 96 percent of omnivores.
Kitchen Divided: Vegan Dishes for Semi-Vegan Households was created to address these unique relationships. Author Ellen Jaffe Jones provides advice, recipes and insightful anecdotes to help vegans and meat eaters accommodate each other in the kitchen. In addition to understanding the science of creating amazing vegan dishes, Jones knows the psychology behind a mixed relationship. Peppered throughout the book are narratives that sound all too familiar to vegans and omnivores — such contrasting lifestyles can lead to food fights, but also to eye-opening revelations.
What I love most about this book is that it isn’t preachy. Jones addresses common criticisms of each camp with wit and respect. Instead of an “all-or-nothing” approach, as many vegans and meat-lovers are inclined to take, options for compromise are presented.
For example, many of the recipes in the book are hearty, flavorful and simple to prepare; the ingredients are familiar, to combat the stereotype that vegans eat “weird” things. To cater to omnivores who want to have meat protein on their plate, “Flex Recipes” are provided to allow meat to be incorporated in one serving during the final stages of the meal.
What’s more, the recipes create meals that are so tasty that an omnivore might not miss the meat. A Thai recipe, “Some Like It Hot Curry,” was a hit in my household (no chicken required). A recipe for mushrooms and lentils in phyllo actually had Neil asking if he had beef in his serving — he couldn’t tell it was “missing” from the meal!
I’ve already recommended this cookbook to my friends in mixed households. In addition to streamlining the process of cooking for diverse needs, Kitchen Divided makes it easier for vegans and omnivores to enjoy cooking and eating together.
Do you live in a mixed household? How do you achieve kitchen harmony? —Susan
New Fitness
New Mamas
New Eats
New Zen
STAY IN THE KNOW
When new stuff happens, you'll be the first to know!