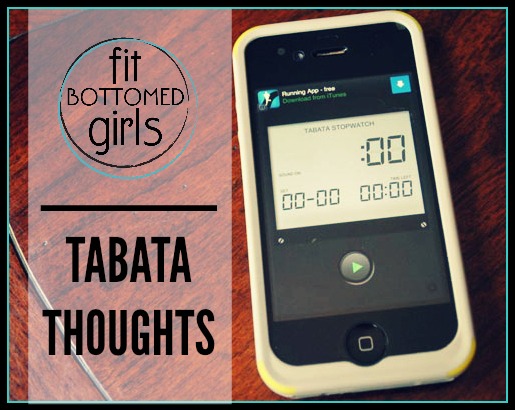 I got some really interesting feedback recently when I wrote about doing Tabata workouts. You smart readers and commenters made some great points, so I wanted to delve into them a little bit.

My first entry into Tabata was doing a workout we posted over on Fit Bottomed Mamas, which consisted of four moves for four minutes each. It was 16 minutes of fast and furious exercise that got me sweating for sure. (I just typed “swearing” instead of sweating; Freudian slip.) True Tabata protocol consists of a warm-up, eight intervals of all-out high intensity exercise (20 seconds on, 10 seconds off) and a two-minute cool down. So, with that said “True Tabata” is just one move for four minutes of intervals.

As one commenter said rather humorously, Tabata intervals are meant to be so difficult that you can’t imagine doing it again for at least a week. Or, put in another way, “If you’re not on the verge of puking your guts out, you’re not doing Tabata.” One reader mentioned that static exercises, like planks, aren’t the best use of the protocol, which is meant to improve both your aerobic and anaerobic systems, meaning you increase your endurance and ability to sustain high-intensity exercise for longer. Many people recommend exercises that have a cardio element to them for Tabata, like mountain climbers or burpees — even straight up running or jump rope.

Now, even when you’re pushing yourself really hard, verge-of-puking pushing takes an amount of “for realness” that many people don’t muster in everyday workouts. This is probably why when you see Tabata workouts like this one and this one, there isn’t just one move. Sure, you push yourself and challenge yourself, but you might not be going as full bore to be considered Tabata. Like me, maybe you’re taking things just a bit easier so you can do a few more moves to work yourself from head to toe.

And in my humble opinion? If you’ve read anything we’ve ever written here, you’ll know what I think: That’s fine!

So if you’re interested in trying anything, Tabata or otherwise, I say don’t be as concerned about doing it “right.” Even if you’re not doing true Tabata, it’s still high intensity interval training, which is still an awesome way to work out. And always listen to your body. We always say it’s better to skip a round than to puke anyway!

What do you think? Do you worry about doing things “right” or just getting active and doing them period? —Erin