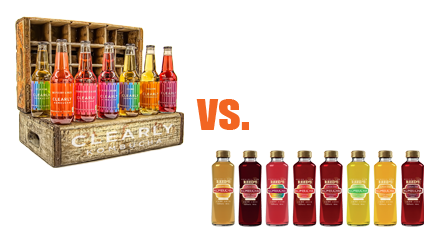 Sure, it’s a little weird and a lot funky. But kombucha, a fizzy fermented tea, is said to be uber good for you, delivering boosts like increased immunity, energy and lots of those super-good-for-ya probiotics. And although a bit of an acquired taste for some, we really like it! While you can make kombucha at home, you certainly don’t have to as there are a ton of brands out there that do it for you — with fun yummy flavors. So for this Food Fight, we decided to have two kombucha brands go head to head! Read on as Clearly Kombucha and Reed’s Culture Club Kombucha (Reed’s also makes ginger beer!) duke it out for FBE’s fave kombucha!

Clearly Kombucha: As the name might suggest, this kombucha is definitely more clear than many others. There’s really no sediment or what is fondly called “floaties” (dead yeast sediment — sexy) in it as it’s filtered through. This is dang nice, and makes you feel like you’re drinking more of a slightly sour soda rather than a fermented tea. And the flavors and packaging? Also just like a soda! With a gorgeous label and color (hey, nice packaging isn’t essential but it is a perk), these come in fun flavors like Chai Cola (our fave!), Asian Pear, Strawberry Hibiscus, Black Currant, Tangerine, Grape (second favorite), Raspberry Ginger and — for you kombucha purists — Original. All are slightly sweet but pleasantly sour and have a nice fizz to them. Not a bad one in the bunch.
Reed’s Culture Club Kombucha: Not quite as clear as the Clearly Kombucha but still pretty clear for a kombucha, Reed’s Culture Club had a stronger flavor than Clearly Kombucha, and in a really nice way. Most of this was due to the ginger — ginger is an ingredient in all but one of the Reed’s Culture Club flavors. You’ve got Coconut Water Lime (only one sans ginger) Goji Ginger, Hibiscus Ginger Grapefruit, Lemon Ginger Raspberry, Cranberry Ginger, Pomegranate Ginger, Passion Mango Ginger and — our favorite — Cabarent Grape Ginger (I obviously adored this one). With the zing of ginger and the slight sweetness of fruity, these are also nicely fizzy and just darn tasty. If you list kombucha and ginger as things you like, you will love.
Winner: This is so close. Like so close. Clearly Kombucha is so fun and the clear thing really is awesome, but we’re giving the slight edge on this one to Reed’s. Overall, we just enjoyed the flavors a tad bit more. (And, you can sing this while drinking it!) Although, we’d recommend both of them!

Clearly Kombucha: It’s hard to believe but a 12-ounce bottle of this has only about 40 calories and 10 grams of sugar. For a nice bubbly treat, that’s pretty hard to beat!
Reed’s Culture Club Kombucha: A bottle of Reed’s — which is slightly larger at 13.5 ounces — has about 80 calories and 20 grams of sugar. (The label for a bottle says there are 1.6 servings in a bottle, which is tricky.)
Winner: No question here, Clearly Kombucha wins it for less sugar and calories but still lots of yummy taste.

This kombucha Food Fight is officially a tie! If you want to go super low-cal with your kombucha or “floaties” gross you out, go Clearly Kombucha. If you’re looking for more fruit and ginger flavor in your ‘bucha and don’t mind a few extra calories, go Reed’s Culture Club (especially the Cabarent Grape — like ‘bucha wine!). You can’t go wrong with either!
We secretly kind of love ties — isn’t it awesome to have not one but two amazeball kombucha options?! What’s your favorite kind of kombucha? —Jenn