Vegan! Sprouted! Organic! Gluten-free! These are generally not words that people think of when they think of “delicious pancakes.” They think of words more like buttery, fluffy — and side of bacon. And while I’ll be the first to admit that my love of protein and health hippie food is at an all-time gluten-free high, even I didn’t expect Wholesome Chow’s Hi-Protein Pancake Mix to be that good.
I’ll admit it. It looks like health food. And not in the good way. 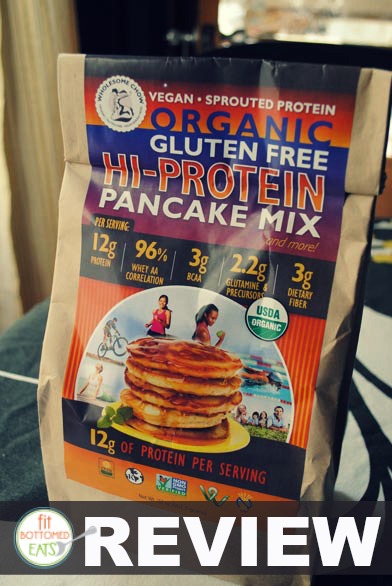 But the nutritionals were enough to make me stop in my Fit Bottomed tracks. This is some power-house kinda stuff here. A two- to three-pancake serving has 290 calories, 12+ grams of protein, 3 grams of fiber and 10+ percent of your iron needs for the day. For pancakes, that’s not too shabby. 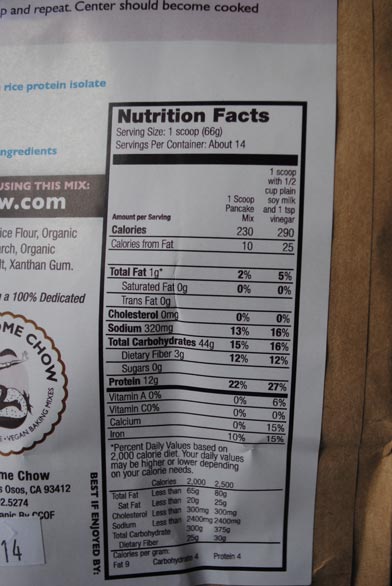 And the ingredients. Well, look at ’em! (Note the Wholesome Chow logo, too — yep, that’s a woman riding a strawberry. I think I dig it.) Made with all-natural ingredients, the high-protein pancake mix is certified USDA organic, Non-GMO Project verified, gluten-free, kosher and vegan (more on that in a sec). 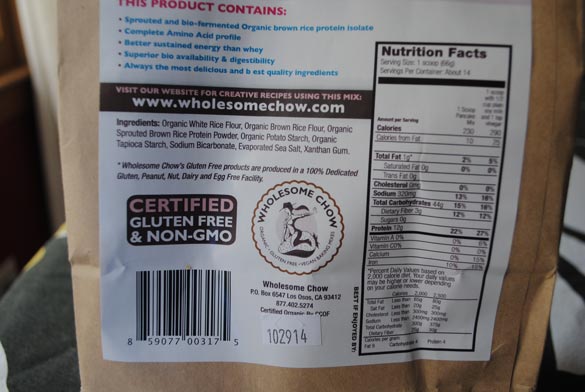 These are pretty much as easy to mix up as your traditional pancake mix, and you can make them with an egg (non-vegan) or with apple cider vinegar (vegan). 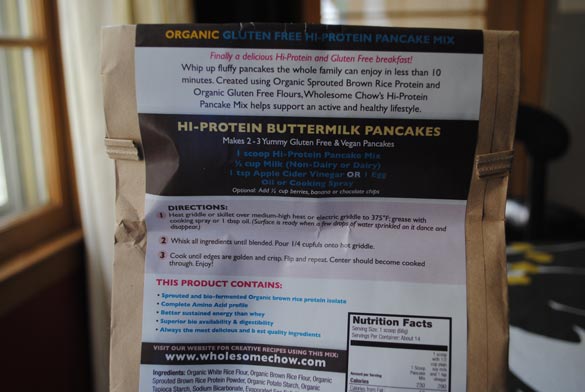 For the sake of comparison (and because I was cooking for two), I whipped up both the vegan and non-vegan version on a quiet Sunday morning. 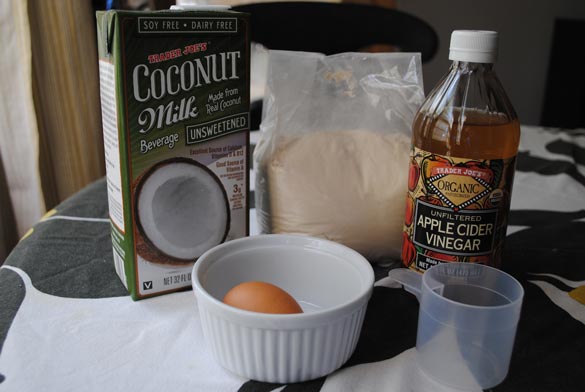 The first thing that made me SO happy about the mix? It came with a scoop! Talk about handy. I really appreciated the attention to detail. Made it super easy, although I wasn’t exactly sure if I was supposed to fill to the top of the scoop or the inner line of the scoop. 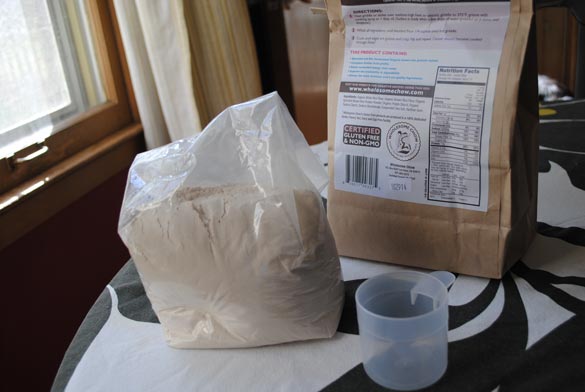 I went for the top of the scoop, pretty tightly packed. 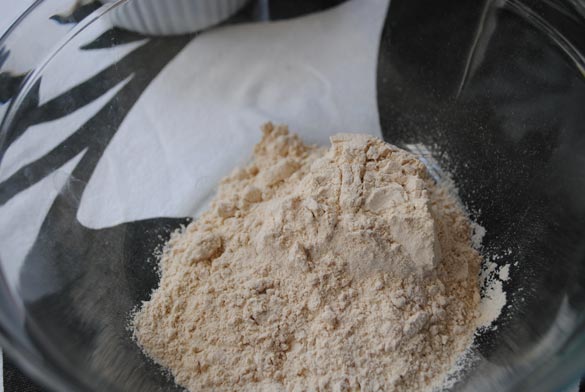 That might have been a mistake. Because after I added my wet ingredients … 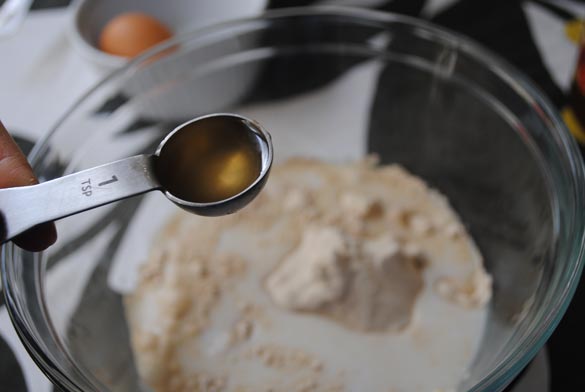 It was a bit sticky. But I went with it. Cooking confession No. 1: I’m a vegan protein pancake virgin. 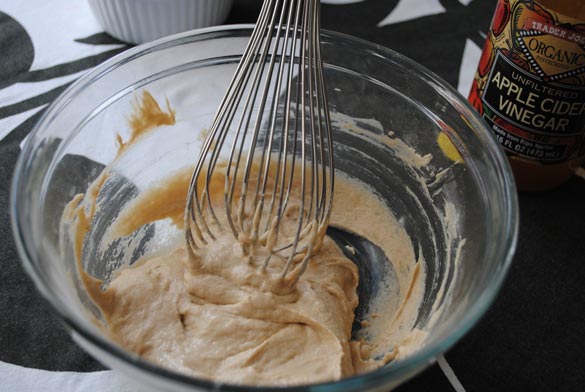 I got them on the hot oiled skillet, but they didn’t really spread out. Pretty darn dense. 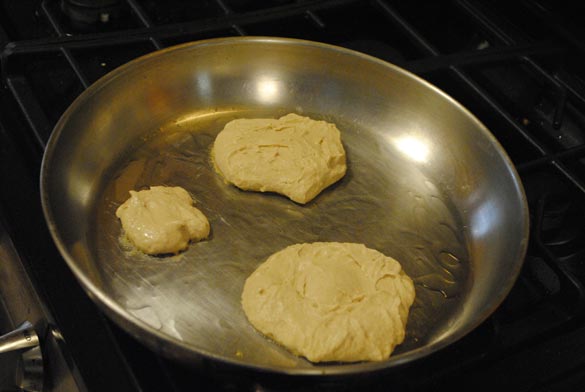 Cooking confession No. 2: I don’t have a very good track record with cooking pancakes of any kind. I never really got these nicely browned — just golden — and they were still kind of doughy in the middle. 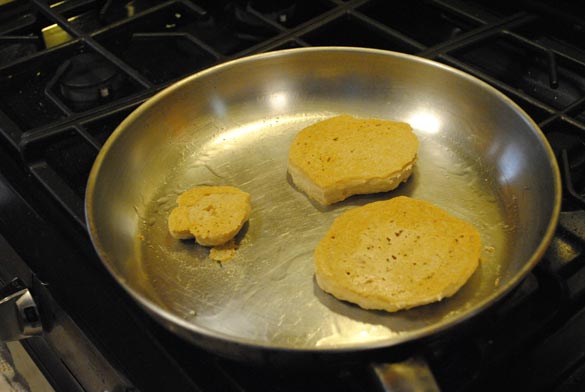 Maybe the non-vegan ones will turn out better, I thought. After all, I do love eggs. 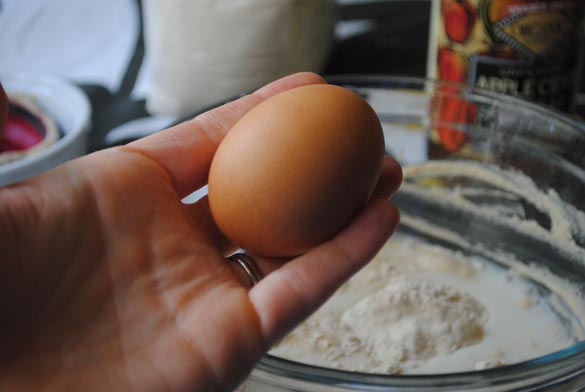 This time I loosely filled the scoop to just about the top of the scoop, but not totally to the top. 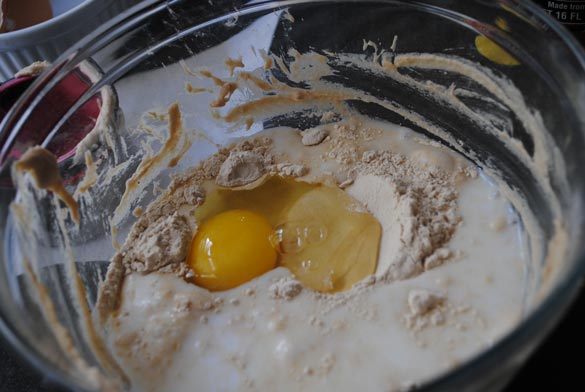 The egg-filled batter was much, much more like your usual pancake batter. 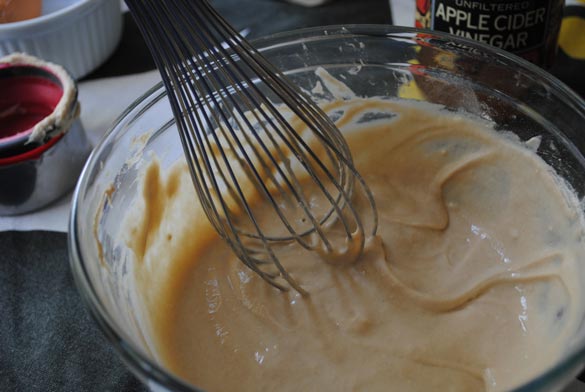 And, hey, they looked more like pancakes and less like biscuits on the skillet! Hooray! (Cooking confession No. 3: My second round of pancakes is always best. First and third always terrible. It’s just like my bowling scores.) 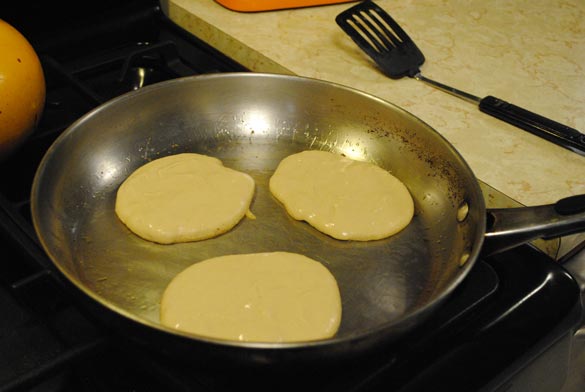 And while I still didn’t get them that usual “pancake” color, these were fully cooked and much fluffier. Light even! 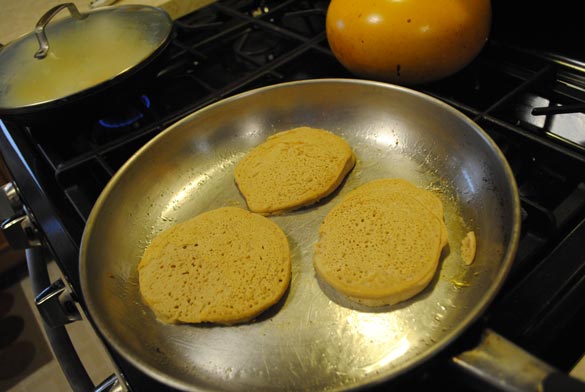 And then it was time to taste-test ’em! Always the best part of any cooking adventure. Non-vegan on the left, vegan on the right. 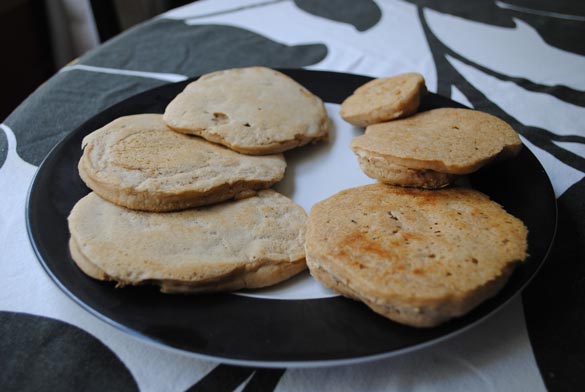 Now, you’re probably expecting me to like the non-vegan ones more … I know I was from the cooking experience. But I have to say, the vegan pancakes tasted better through and through. Sure, I didn’t make them perfectly and they were a little soft in the middle, but they were hearty and filling and kind of wonderful. 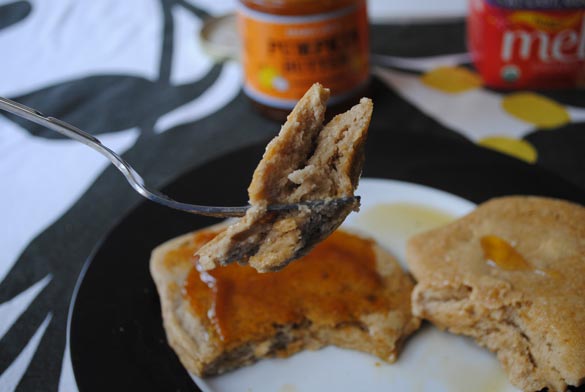 That’s not to say though that the non-vegan ones were bad. They were actually quite good, too. Just not quite as pancake-y for me. 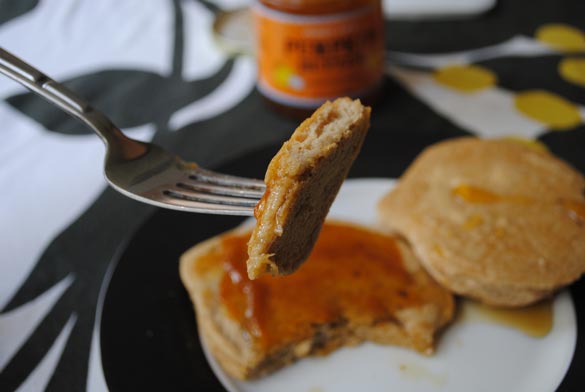 And honestly, with just a little pumpkin butter, butter and a drizzle of pure maple syrup, they were both damn good. And unlike regular pancakes, they kept you full hours later and had none of that heavy sugar crash most pancakes give you.
In fact, poor presentation aside, I think just about everyone would find these tasty. They may not call them “buttery” and “fluffy,” but I think they’d call them “delicious,” and not nearly health-food-esque at all. 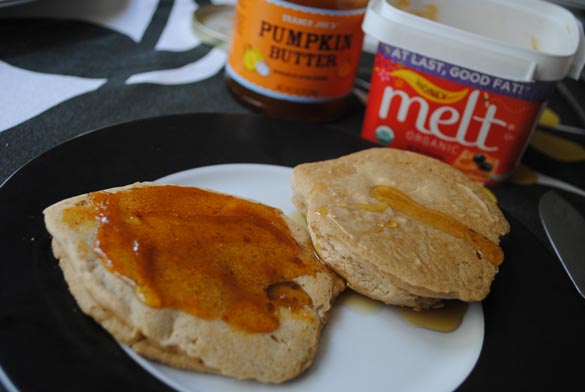 Especially with that side of eggs and bacon. (No disrespect, vegans!) 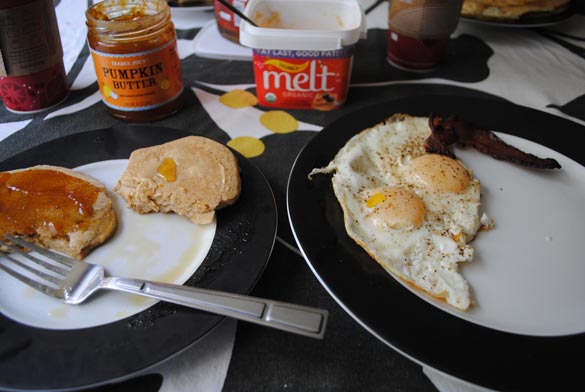 When you see the words vegan, organic, gluten-free and high-protein, what’s the first thing you think? Ever made high-protein pancakes? —Jenn