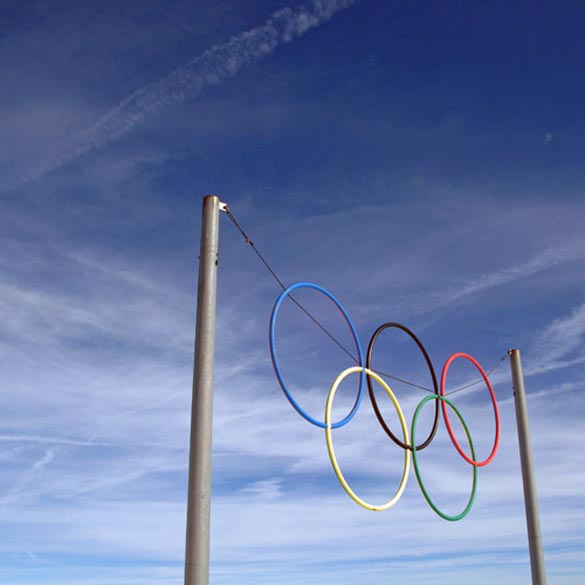 For the next week or so, you’ll hear a lot about the Winter Olympics here on FBG. It’s no secret that we’re huge fans, and we’re pretty much consumed by it, watching as much of it as we can while it’s on. So why am I just so darn obsessed — besides the obviousness of it being entertaining and inspiring? For all of these 17 reasons, that’s why!

17 Reasons to Watch the Winter Olympics

1. It’s like traveling the world. There’s no better geography lesson than the Olympics. From countries you’ve never heard of to learning the landscape and customs of those living in Sochi, you’ll totally become more worldly.

2. It’ll make you wonder what secret superpowers you have. I’ve never tried a number of Winter Olympic sports — curling, bobsleigh, ski jumping — and I know I’m not alone. Just maybe, maybe I could be good at them, too. Who knows what hidden secret superpowers you could have that have just never been tested!

3. You’ll work out harder at the gym. After watching Olympic athletes give their events their all, there’s no doubt that you’ll want to give your workouts your all, too!

4. The outfits! Whether you like them or not, the fashion scene at the Olympics is always interesting to see.

5. You’ll dream. These Olympic athletes have been waiting their whole lives for this one event and one moment. They’ve been dreaming and planning and training. It’s so darn inspiring that it’ll have you dreaming, too!

6. Two words: emotional release. From heart-warming stories of overcoming struggles to injuries to failed dreams to incredible feats of kindness and sportsmanship, it’s always a good idea to have a box of tissues handy when watching the Olympics.

8. You’ll see the world differently. At the end of the day, no matter what country an athlete is from, they just want one thing: to be their best. Not only is that inspiring, but it reminds us all that race, age, country, culture, customs — it doesn’t matter. We’re all the same when you get right down to it.

9. You’ll become a darn-near expert on some really random things. If you’ve ever yelled out “triple salchow” or “hogger,” you know what I’m talking about.

10. You’ll make new friends. Are you an introvert who sometimes has trouble knowing what to say to a new person you just met? Strike up a conversation about the Olympics. Works every time!

11. You’ll be up on your international politics. There’s been a LOT of news surrounding the Winter Olympics this year. From politics to security, you’d pretty much have to be living in a cave to not be aware.

12. Girl power. Supporting women in sports is a good thing for all but especially for the generations coming up!

13. You might just take up a new sport. If you hate winter and avoid being outdoors like the plague, watching the Winter Olympics athletes do amazeballs stuff may convince you to get out there anyways, and maybe even test out one of those secret superpowers from no. 2!

14. The stories. Oh, the stories! Reality TV has nothing on the Olympics. Nothing.

15. You’ll find new tunes for your workout playlist. It was Phillip Phillips for the Summer Olympics, but we can’t wait to hear what new inspirational tunes the Winter Olympics features, helping us to channel our inner Olympians via our earbuds!

16. It’ll improve your body image. After hours of watching people of all sizes do amazing things — when the focus is on performance and not looks — you just might start seeing your own body in a new, healthier and more loving light.

17. It’s the greatest sporting event in the world. No question.

Okay, now there are about a million more reasons why watching the Winter Olympics rocks. What’s yours? —Jenn