I wrote about this over on Fit Bottomed Girls yesterday, but when it comes to birthdays, I like to draw things out. Like all week out. So for this What I Ate for a Day, I’m switching it up … it’s more like What I Ate for a Week. Because I ate SO DARN WELL.
And, really, it’s not my fault that I must turn into a full-out foodie glutton the week of January 26. It’s Restaurant Week in Kansas City! I mean, really, what’s a girl to do? Um, go eat at ALL THE RESTAURANTS! That’s what!

My Restaurant Week/foodie birthday pursuits began at Pig & Finch Gastropub in Leawood with Tessa. Seeing that I’m gluten-free, this was pretty much the only thing I could order. But, that doesn’t mean that it wasn’t totally up my alley. It’s like they created it with me in mind: kale salad with a roasted cauliflower soup. I full-out plan on making my own version of both at home. And soon. 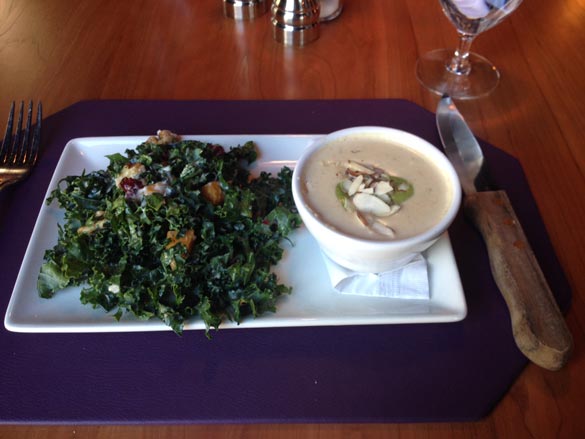 Tessa had the soup, too, plus a sammie. And she was nice enough to share her homemade pickles with me. 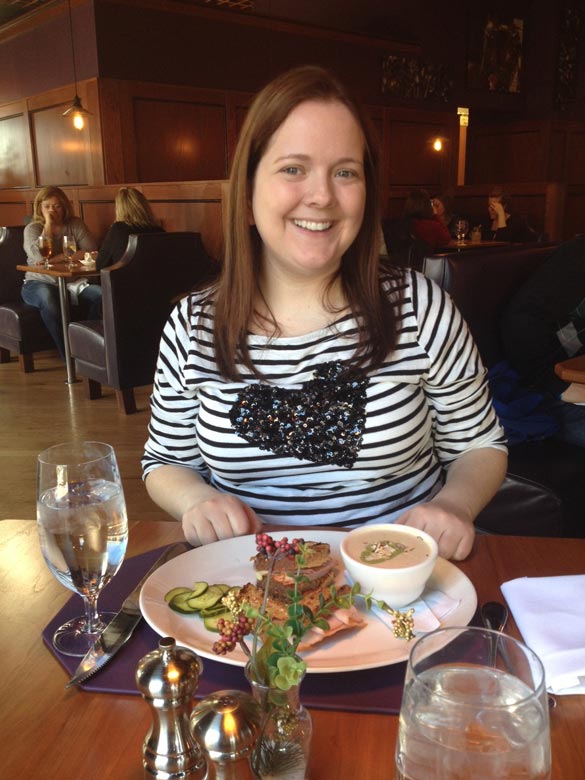 For dessert, I had a cup of coffee with a lovely lemon flan with mint and raspberries on it. So tasty! (And I love how flan — one of my fave desserts — is naturally g-free!) 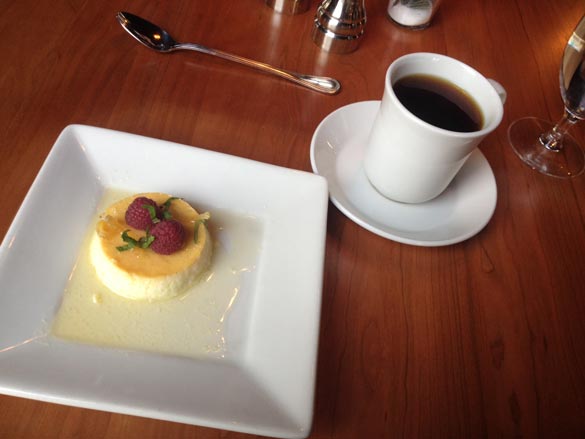 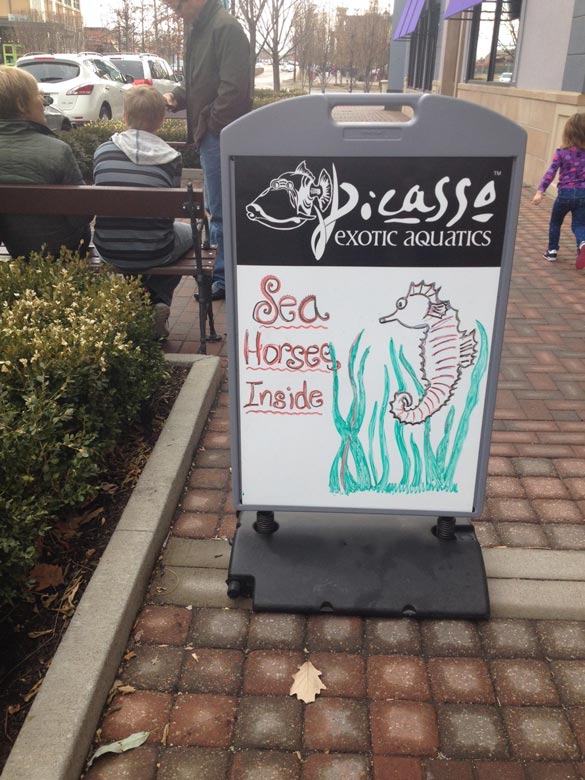 We totally bit. I mean, who doesn’t want to see seahorses after a great meal? And there were, in fact, seahorses inside! No, we didn’t eat them. I just felt compelled to share because it was really cool. And pretty random. 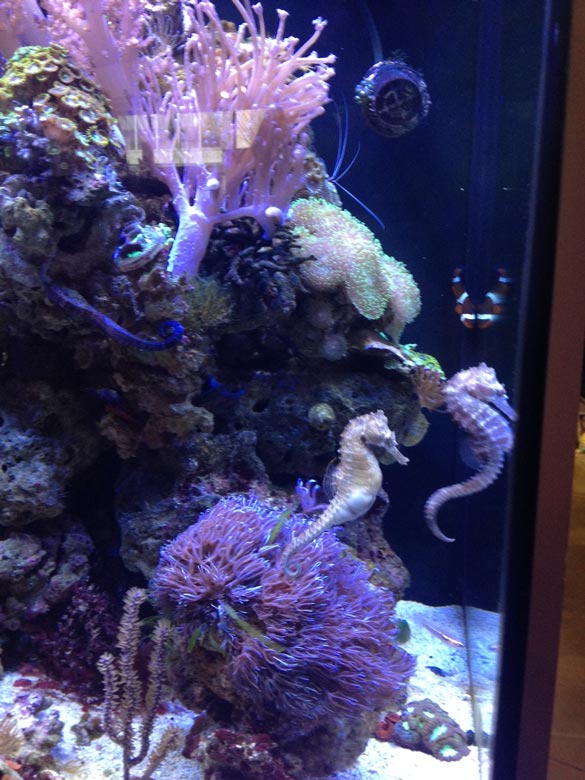 A few days later, my parents took me out to Cooper’s Hawk for my birthday. Karen loved the place, and I hadn’t tried it yet, so — yet again — Restaurant Week beckoned me belly. They have a great gluten-free menu, and I ended up with a plate of Chicken Madeira with potatoes, asparagus and a glass of Cooper’s Hawk’s Barbera. They only offer their own wines, and it was good! And the food was super good, too. I’ll definitely go back for more food and wine. 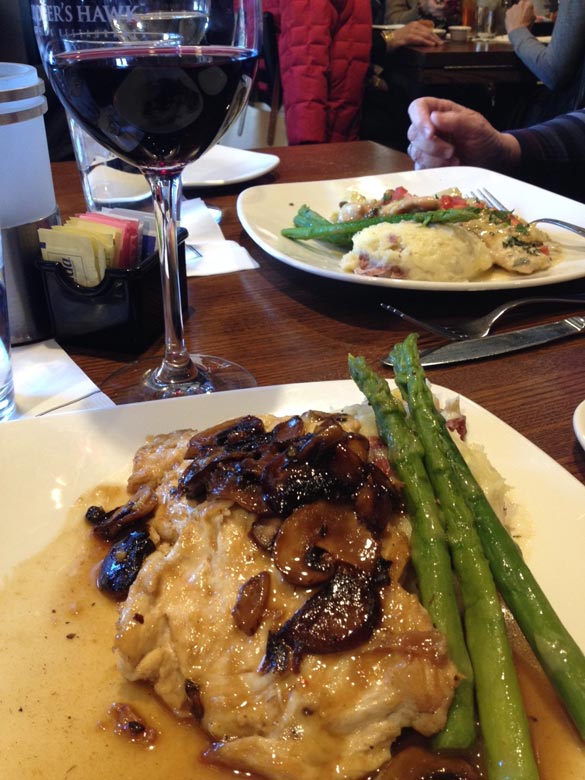 And how cute and deliciously simple is this dessert? LOVE. 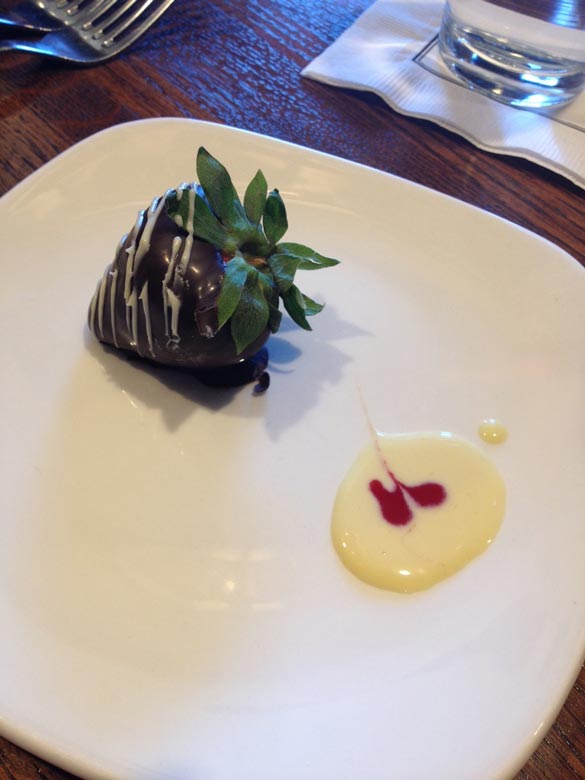 My grandmother’s (who I lovingly call Nana) birthday falls two days before mine, so this year the whole fam gathered at Stroud’s for some down-home cooking to celebrate the January birthdays. Stroud’s is pretty famous for its fried chicken (they choke their own chickens, is the saying!), and its cinnamon rolls are to-die for. This was the first time I’d been to Stroud’s since having to go totally gluten-free, and I have to admit, it was a little hard to forgo the chicken and cinnamon rolls. But, knowing that I’d end up with a food hangover and a not-so pleasant time in the digestive department if I did eat them, I opted for a side salad (not shown — but it had beets on it!), grilled salmon and SO MANY mashed potatoes and green beans. So no worries; I still left totally and absolutely stuffed. (And they brought out cinnamon rolls with sparklers in them for Nana and I, which was totally embarrassing and fun.) 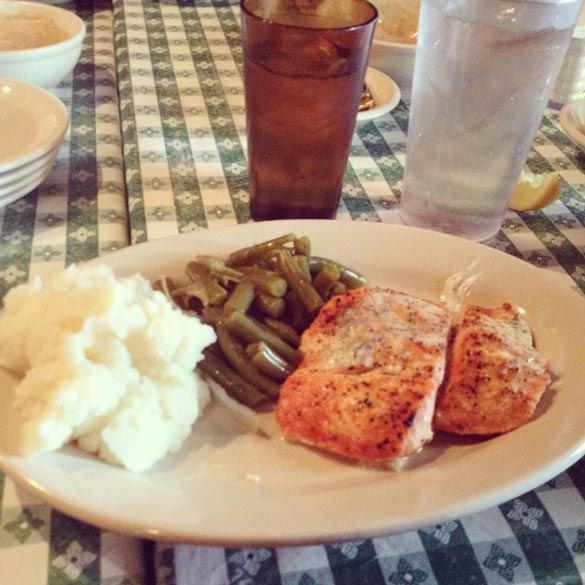 Okay, so Port Fonda wasn’t doing Restaurant Week, but I’ve eaten there a few times, and I’ve been really impressed with both their food and drinks, so I got some buds together, reserved a big table and got my grub on the night before my birthday. I ordered the Pollo de Pascal special after much deliberation, as everything sounded pretty amazing. 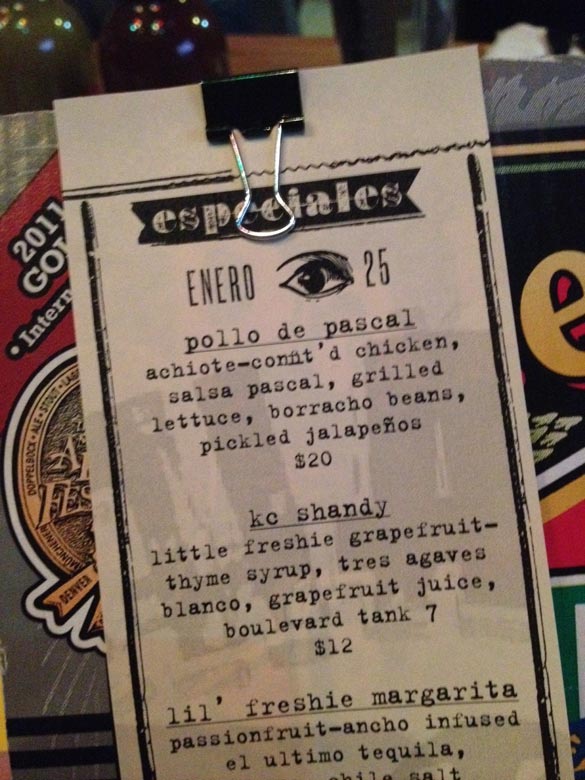 While waiting for that to be cooked up, I ordered a Roselle Margarita (el ultimo blanco, triple sec, hibiscus and lime). So fresh, simple and delicious, it was super refreshing and celebratory feeling. 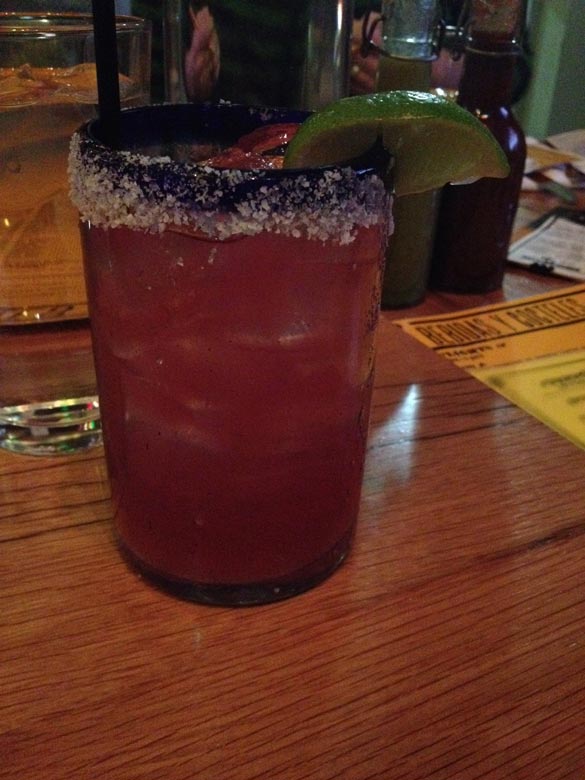 Ryan and I also split a tequila tasting. I know people have strong feelings on tequila. I fall in the love-it-and-want-to-know-more-about-it camp. Port Fonda has a huge tequila offering, so we defaulted to our server’s opinion on what was good to try. 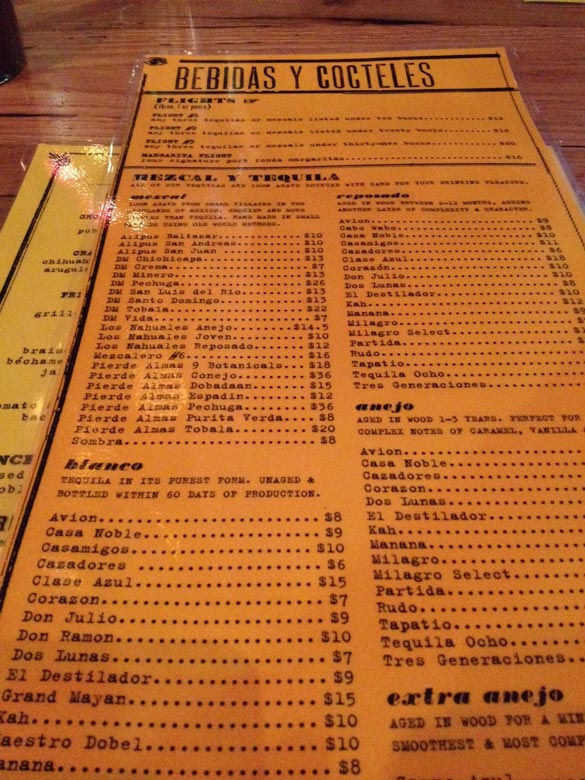 We ended up with three from the Mezcal category: DM Minero, DM Santo Domingo and Los Nahuales Anejo. These were seriously SO good. I mean, you obviously can’t taste much more than this or you’ll be singing on the bar (which I did not do), but I will definitely be doing more tastings in the future. There’s a ton of variety and taste based on types and aging and all that. So fun. And these were surprisingly smooooth. 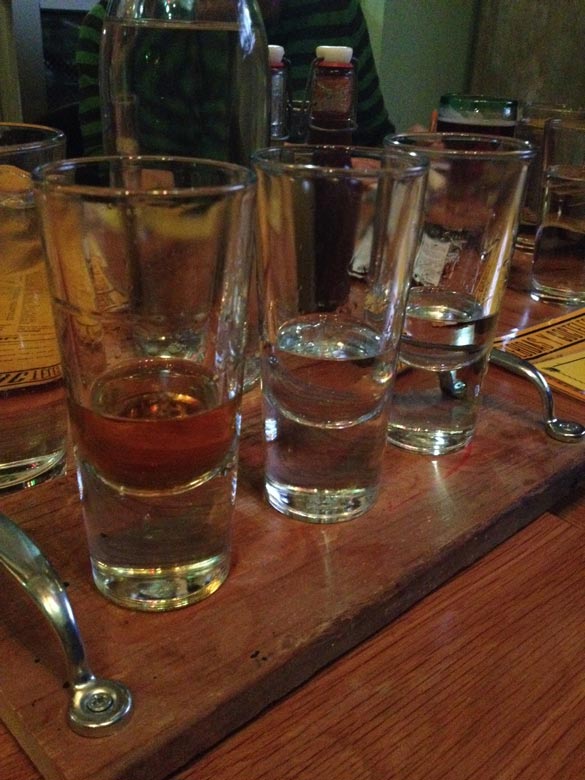 To go with our tequila flight, we noshed on some ceviche. Side note: Port Fonda has the best chips. Thick, hearty and delicious dipped in anything. 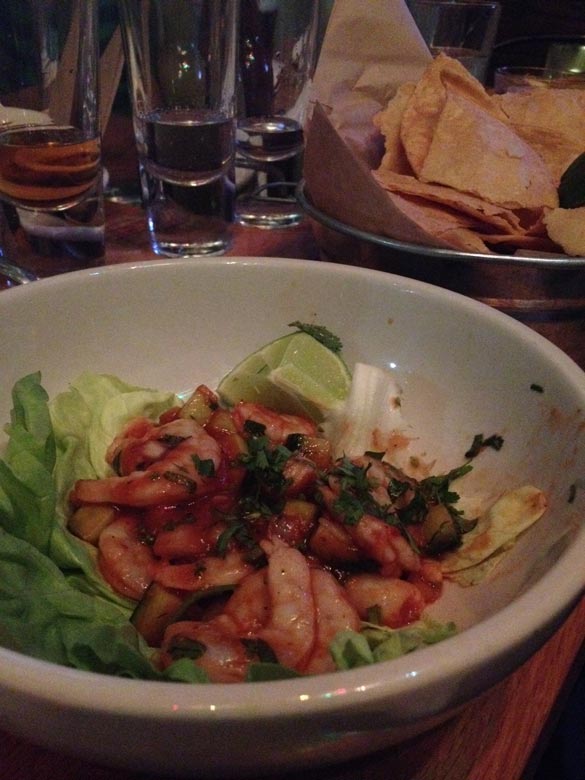 And the especiale did not disappoint. The slightly charred lettuce was fresh, and the chicken was so tender. This in some homemade corn tortillas, and it really was a party. (And that’s not just the tequila talking.) 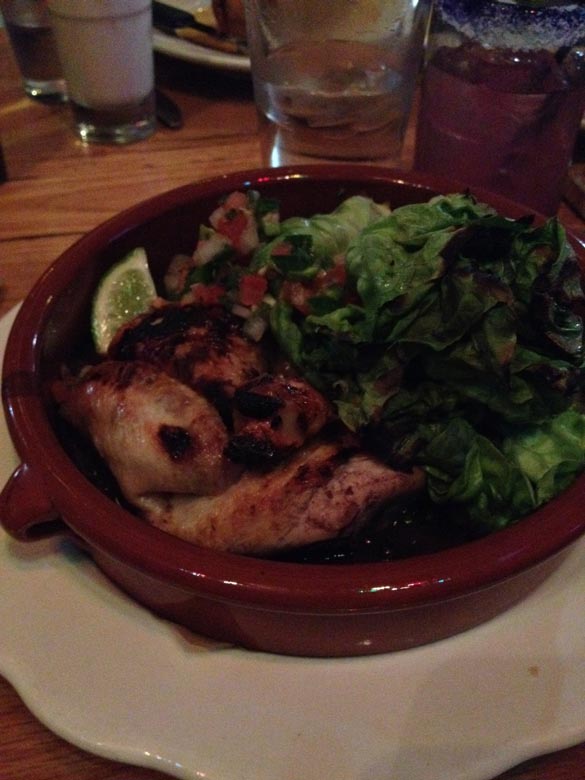 We ended the meal with avocado ice cream. Yes, you read that correctly. AVOCADO ICE CREAM. It was rich, and fatty, and creamy, and not overly sweet, and subtle, and just about the best thing ever (for me). 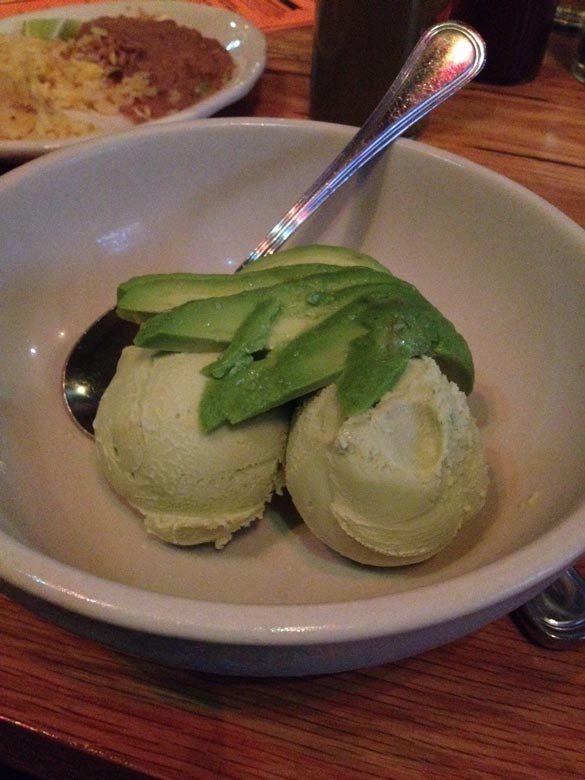 After dinner, we headed out for a nightcap at one of my fave local joints: Remedy. For some reason that whole night we’d been talking about Canadian whisky and Fernet Branca, so when we walked in and the bartender said he had a special drink — the Toronto — which has both of those things in it, we pretty much decided the universe wanted us to drink it. And so we did. 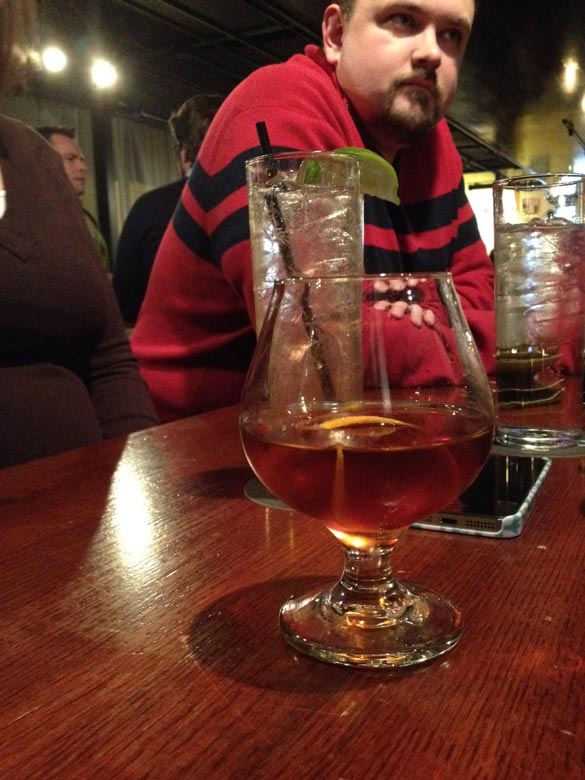 Note: I didn’t drive myself home, obviously. And it was a fabulous night with friends.

Birthday Meal No. 5: The Corner Restaurant

Now, on my actual birthday, I got spoiled with a 90-minute couple’s massage at noon, which started with a nice cup of green tea and was followed by an hour and a half of pure bliss. 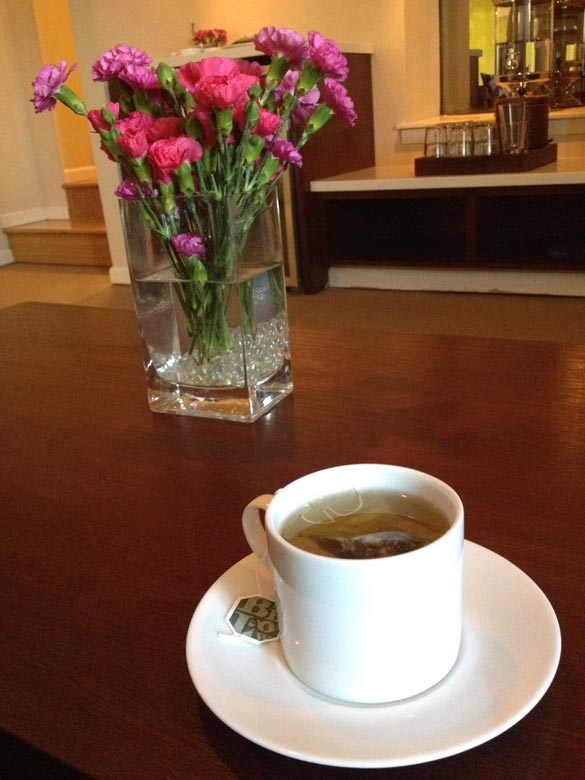 After that, Ryan and I hydrated up and then hit what would be the final stop for my birthday and Resturant Week adventures: The Corner Restaurant in Westport. It’s fairly new, so I didn’t know what to expect, but after stopping at the bar while we waited for our table, I was already sold. I had a grapefruit mimosa and Ryan had a bloody Mary that was almost chewable. Housemade and spicy, I will definitely be getting one for myself the next time we go. (And we will be going back … ) 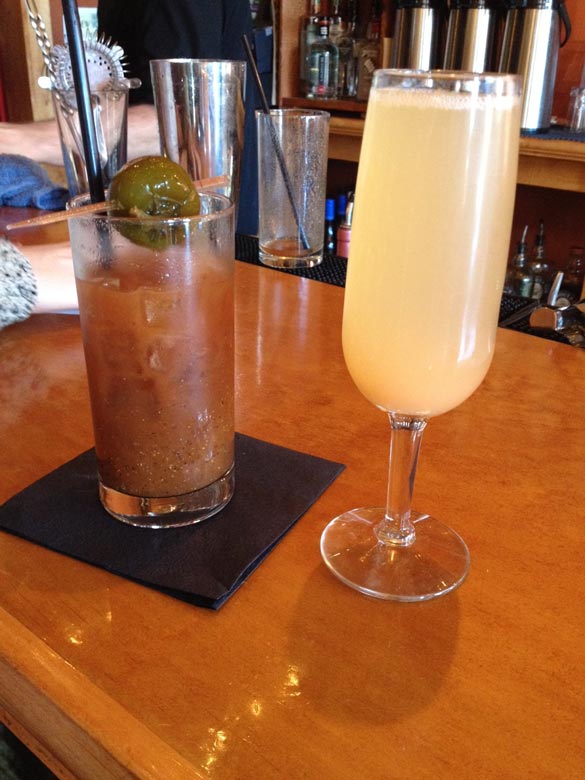 The Restaurant Week special started with a nice ol’ salad. This wasn’t life-changing, but the dressing was really good, the veggies were fresh and the whole ambiance and vibe of the place was fantastic. A huge cross-section of people were there, which I always dig. 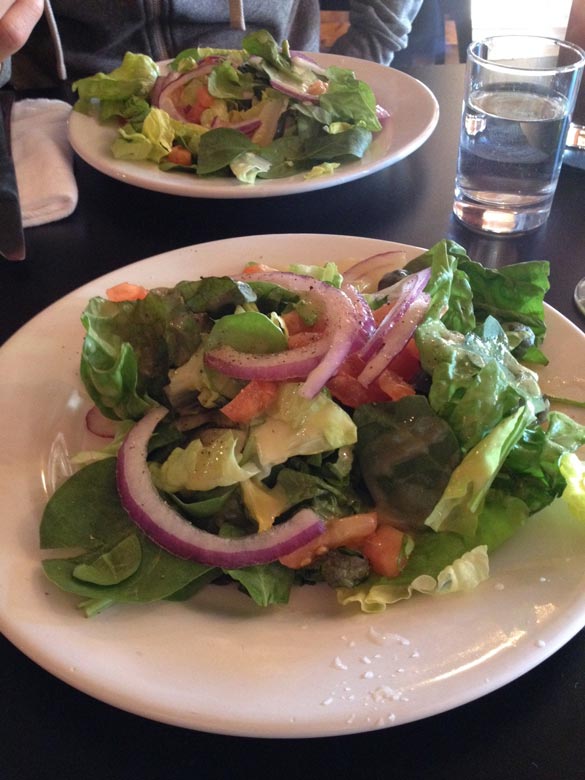 But the next dish? Oh, yes, give me more. This red-bean cassoulet with ham and potatoes was amazingly good — and gluten-free. Putting an egg on it just made it more awesome. (Egg. Cooked. Perfectly.) 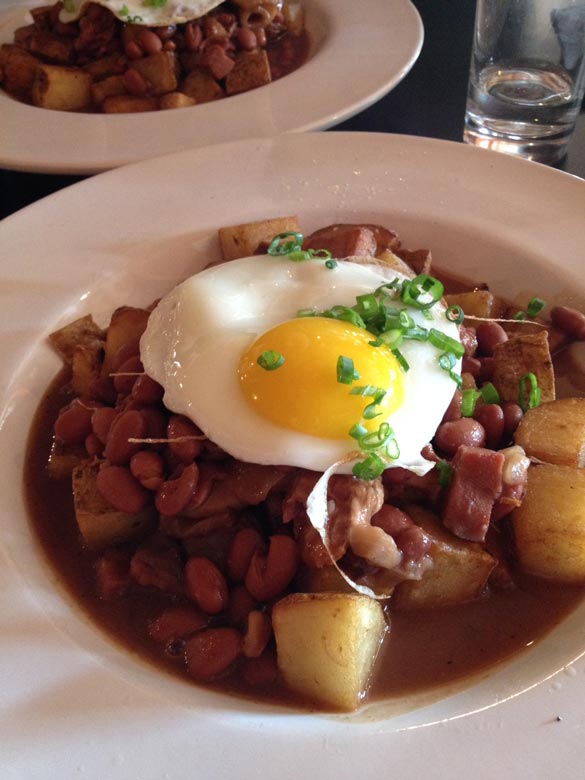 We ended things with more flan! This time it was vanilla with almonds and cherries on top. The cherries were so fresh and sweet, while the flan was more subtle and had a great texture, especially when mixed with the crunch of the almonds. 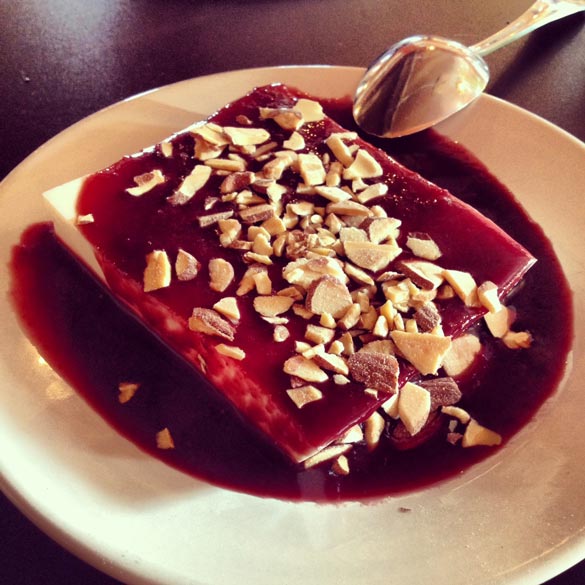 Between my massage and this meal, I was pretty much in birthday heaven! Talk about feeling spoiled! I got the royal foodie treatment all week long. And, of course, I can’t wait until next year …
Tell me: Do you do Restaurant Week in your town? And do you like to celebrate your birthday with foodie adventures? What’s been your most memorable one? This year tops it for me, for sure! —Jenn