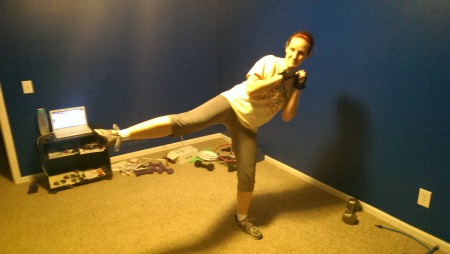 Sweet side kick, right? And well-earned after 60 days of these workouts!

So the second phase of Les Mills Combat DVD flew by … and crept by at the same time. During the last few weeks we were introduced to one more workout, the Combat 60 Live, which is pretty much like a big live workout class. It definitely changed things up with other people in the cast leading a few exercises.

Jason and I plowed through this one as much as we could despite him getting sick and a holiday thrown into the mix. It was tough, but we fought on. I tried to improve my kicks and punches a little more in the last half — not sure how successful I was, but I did my best.

The big difference with this latter half of the workout was that the longer workouts, like the Combat 45 or Combat 60, were scheduled more often than the 30-minute ones. Otherwise, this half was very similar to the first half. I am more of a variety girl, especially when I’m working out at home, so to feel like I’m just continuing on was not as fun as the previous workout videos I’ve done (P90X2 and Turbo Fire).

After we finished the series, I felt like I had learned some moves that could truly help me in difficult situations if I really needed them. Though I determined I’m not a fighter, I’m happy to have these punches and kicks under my belt.

This was not my ideal workout series, but I gave it a go and stuck it out like a true FBG for the 60 days. Now, it’s time to move on to more exciting workouts! (And stay tuned in the coming weeks for my full official review of the Les Mills Combat DVD system!)

Have you ever stuck it out with a workout that didn’t quite float your boat? —Kelsey