Wouldn’t you know that the day I posted a pregnancy update, I went into labor. But more on that in a moment. First, the quick stats! 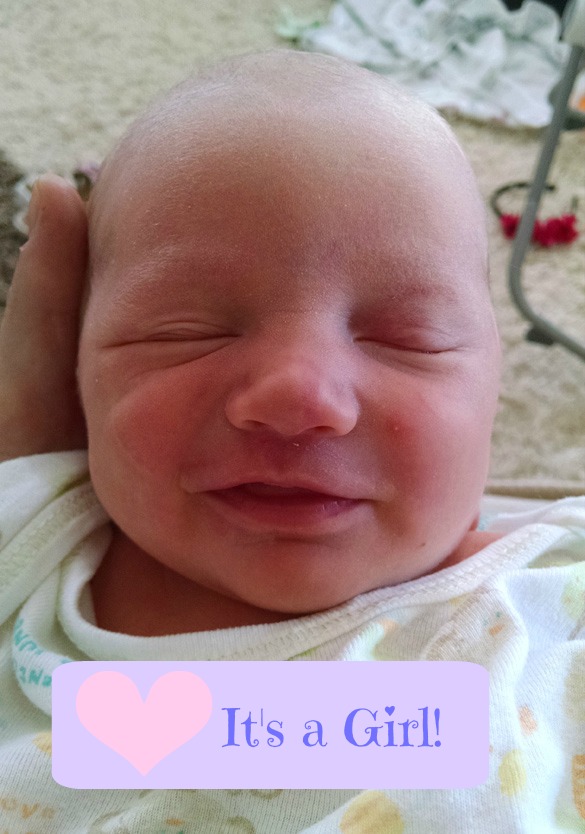 Labor duration: 7 hours, my longest yet

Hair: None! My others had so much hair (my daughter had a newborn mohawk!) but Emery is bald like I was

I went into labor the morning after Labor Day. Contractions were pretty mild, but they were coming consistently 15 minutes apart, so I had my husband stick around to see what happened. They got a little closer together and a little more “I’m having a contraction!,” so we gave the doctor a call and waited on a callback while we headed to the hospital.

The doctor never called back. But because of our history of fast deliveries, we camped out in the hospital lobby for a couple of hours. At the time I felt really silly for doing that, but when I saw how the story ended, I’m glad I was there just in case! We finally got around to calling the doctor’s office again, and they wanted me to come in and get checked, so we did the five-minute drive down the street. Sure enough, I was dilated to 5 cm and definitely in labor, so we headed to the hospital to check in.

Once there, we settled in to kill some time, and just like my son’s delivery, I didn’t want to budge off the bed. For many women walking helps ease the pain — and I remember not wanting to sit when I was in labor with my first — but all I wanted to do was sit and relax between contractions. After a couple of hours, the attending physician checked me, and I was 6 cm. And I was pretty pissed. Because I had gone through a couple of hours of labor for one lousy centimeter. The doctor told me that my doc would likely break my water soon to speed things up, so I continued laboring, waiting for her to show up.

That lasted about 20 minutes until I hurriedly rang the nurse because I felt like I had to push. The nurse checked me, and I was upset to learn that I was still a 6 because the urge to push was undeniable at that point. She and my husband talked me through two contractions without pushing, as she was on the phone telling my doctor to get there. I hilariously asked if it’s too late for an epidural because, at that point, I’m thinking that there’s no way I can prevent myself from pushing without pain relief, and Alan reassured me that it was almost over. Then all of a sudden the attending physician is there, along with other nurses, and my body decides it’s had enough of the not pushing. So without even consciously deciding to push, I did — and my water broke. And Emery was born one minute later.

I got to hold her immediately and for a really long time, unlike my other two who I barely got to say hi to before they were whisked away. She peed all over me immediately. She passed her glucose tests and earned her spot at my bedside while I recovered, rather than the NICU. Her jaundice was minimal, and she needed no phototherapy. We were out of the hospital in two days. And she’s the laziest baby I’ve ever had — she sleeps and I have to wake her to eat. I know that’ll change as she discovers she’s no longer in the womb, but I’m enjoying how easy she’s been while I recover.

More in the weeks to come on how the big brother and sister are adjusting to life with a new baby! It’s gonna get chaotic around here … —Erin