I’m not a fan of kale.
There, I’ve said it and now everybody knows my dirty little secret. To elucidate, my aversion won’t cause me to upchuck, but I never order it or cook with it, even though it is one of the most nutrient dense foods on the freakin’ planet! It’s a great source of fiber and beta-carotene, a powerhouse of Vitamin K and A, plus it’s loaded with anti-oxidants.
And I’ve tried to like it. I really have. With all of those health benefits, you’d be a fool not to include it in your diet; unfortunately, I just can’t pretend to like the stuff.
I had all but given up on kale, until the fine people at Three Bridges introduced me to their Superfood Kale and Spinach Ravioli and Superfood Pesto Made with Kale. And wowser! It completely changed my opinion of the leafy green. 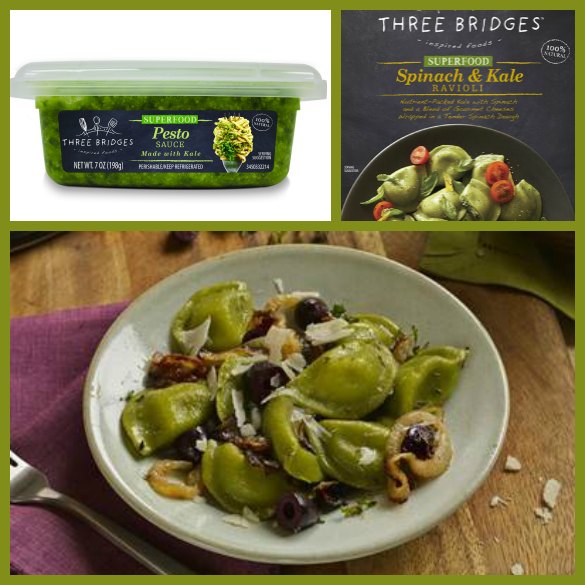 Here’s the deal. I find raw kale to be unpleasantly bitter, tough to chew and so fibrous it can be difficult to digest; but, take those same greens, cook ‘em (easier on the jaws and the digestive track), blend them with four gourmet cheeses, then wrap the whole mess in a tender spinach dough and you’re getting somewhere.
Now, top that with a low-fat, heart healthy sauce, like a pesto made with fresh basil, garlic, Parmesan and — dare I say it? — even more kale, and you’ve got something to write home about!
Honestly, it doesn’t taste a bit like kale. The spinach ravioli is pleasantly earthy and the pesto is garlicky, cheesy, basily nirvana; the stuff is good enough to eat straight off of a spoon!
Did I forget to mention protein? Unlike lots of other pre-packaged ravioli, the Three Bridges brand provides a hearty dose along with all of that kale goodness — 16 grams of protein per one-cup when served with the pesto.
I still won’t dive headfirst into a kale salad, but finally, I can proudly stand up and say, “I like kale!”
Are you a fan of this fibrous green? If you’d rather ease yourself into the land of kale, try the pesto on bruschetta or this ravioli recipe sans the pesto. —Karen
New Fitness
New Mamas
New Eats
New Zen
STAY IN THE KNOW
When new stuff happens, you'll be the first to know!