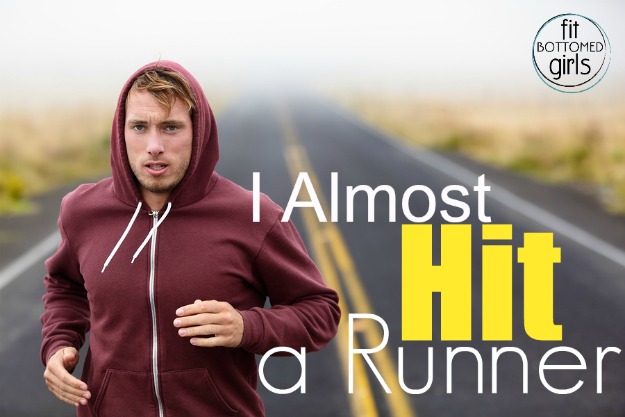 I was driving my kids to summer camp the other morning when I almost hit a runner. I was pulling up to a stop sign when out of nowhere came a runner crossing right in front of me. In a bright neon green shirt. It’s New Jersey, so of course he made an irritated WTF gesture at me and I waved apologetically, glad that at least I didn’t get the middle finger.

But I felt terrible. Never in my life have I better understood the term “out of nowhere.” Because it was as if he’d appeared at the front of my car out of thin air. I wanted to run after him, apologize, tell him I was a runner, too. Tell him that I understood, that I was one of him. But instead I replayed the scene over and over and over again in my mind. How could I have not seen him? It doesn’t matter that I was going slowly; when you hit a pedestrian you still hit a pedestrian. I was horrified at the thought.

The day after my near miss, I took the exact same route to the kids’ camp. I wanted a do-over, a replay to see what had happened. As I pulled up to the stop sign I realized what had happened. There was a giant bush to the left. It was feasible that I hadn’t seen him behind the bush — and then he’d lined up perfectly behind the A-pillar of the car (the windshield blindspot, I looked that up for you guys) as I pulled to a stop. It was a perfect storm, and he essentially had come out of nowhere. It’s scary because no amount of my paying attention could have prevented the situation.

It happened another time fairly recently, too. I was about to make a right onto a street, into the sun. As I eased into the street, I noticed a man running across the street. I saw him in plenty of time, but with the blinding sun, I was relieved that I’d seen him at all.

As a runner, these two situations were terrifying. It reminded me that even the most diligent of drivers can have a moment when they simply don’t see you. It could be a blindspot in their car, an untrimmed bush, a bright sunset in their eyes at the wrong moment. As a driver, be diligent as you drive and look out for your fellow man. As a runner, assume nothing. Don’t assume someone can see you. Don’t assume someone will stop. Because if you get hit, it might not even be because someone isn’t paying attention; the perfect blindspot situation can happen to even attentive drivers.

Have you ever had a close call while running or driving? I think I’m set for life now. —Erin