When I first set out to run a 5K, then a 10K, a half marathon and then a marathon, there was one person I went to for training plans and advice: Mr. Hal Higdon. And when it comes to running, Hal is the man. He’s contributed to Runner’s World for longer than any other writer and is the author of more than 36 books. He has run 111 marathons with a personal best time of 2:21:55 (um, whoa). He ran in the Olympic Trials eight times and won four World Masters Championships.

Higdon has also served as training consultant for the Chicago Marathon and Chicago Area Runners Association and also interactive training programs through TrainingPeaks. He just released the revised and updated third edition of his uber popular book, Run Fast: How to Beat Your Best Time Every Time, and we are totally pumped to share an excerpt from it about the key elements of efficient running form! Because I know I want my running form to be more efficient so that I can run faster and further. And I’m betting you do, too. 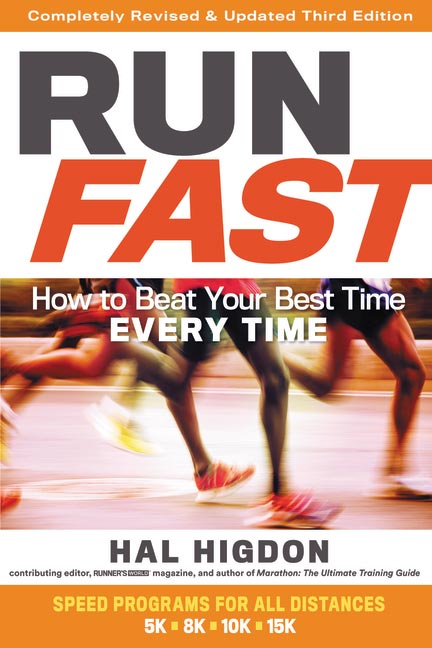 So what is good running form? And how do you recognize it? The two-time Olympian Fred Wilt, a contemporary of Stone, made an interesting analysis of running form in his book The Complete Canadian Runner, produced for the Canadian Track and Field Association. Some of Coach Wilt’s views are included in this list of elements of form and how efficient runners use them. Read the following points, then ask yourself: “How do I stack up?”

Footstrike. The majority of better runners land on their midfoot; that is, at a point just behind the ball of the foot. They then drop down on their heel, and their body glides above the foot that is planted firmly on the ground before they push off with the toes. Some land more forward on the ball of the foot (toe runners); others land more flatfooted (heel strikers). Different runners have different plants, dictated by how the parts of their bodies fit together, otherwise known as biomechanics.

If you possess an imperfect footplant, if your foot pronates too much or too little (which can cause injury), you may need to see a podiatrist for orthotic inserts. Most runners, however, can control such problems by carefully selecting shoes. The worst thing you can do to your footstrike is to try to adjust your landing to accommodate what you think other runners do.

Stride length. There is no definition of a perfect stride length; the best stride lengths depend on each runner’s natural form. In general, however, a short, quick-tempo stride may be more economical in a 5K or 10K race. A long stride causes the runner to lose momentum and waste energy by pushing too far ahead of his center of gravity — thus, the term overstriding. But understriding can be just as great a mistake. Attempting to manipulate your stride, based on some article you read online, also poses risk.

Experts suggest we should all aspire to 180 steps per minute, but athletes differ greatly when it comes to cadence. In tests at the Nike Sport Research Lab, laboratory director E. C. Frederick, PhD, measured my stride rate at between 192 and 196. Olympic marathon champion Joan Benoit Samuelson, tested at the same time, exhibited a 200 cadence. Running Times author Phil Latter notes that Ethiopia’s Kenenisa Bekele, a world record holder, ramped his stride rate up to 215 in the last lap while winning the 10,000 at the World Championships. Although 180 strides per minute is promoted by some experts as the perfect cadence, different runners may achieve success with different counts.

Carriage. Your trunk should be more or less perpendicular to the ground and your hips should be forward. American Olympian Garry Bjorklund once told me, “Novice runners have a tendency to sit down, to put their weight behind them. They need to bring their center of gravity forward and get their weight over their metatarsals (the part of your foot between the ankle and the toes).”

Arm carry. Your arms should move in rhythm with your legs. They should swing forward more than sideways, with your elbows in and your hands cupped (rather than clenched). The late Bill Bowerman, who was track coach for the University of Oregon, liked to have his runners carry their arms high across the chest. Villanova University’s Jim “Jumbo” Elliott wanted his runners to carry their arms low, “thumbs in their pockets.” If these two renowned coaches can differ as to what is proper form, then there may be no proper form.

Head position. The head serves as the keystone for the rest of the body. Back in some Paleolithic era, a coach once told me to fix my gaze 10 yards up the track and use my eyes to anchor my head in a relaxed position. That is probably as good advice as any. If you allow your eyes and gaze to wander all over the road, you probably will wander with them.

A huge thanks to Hal for the tips! Will this change your running form at all? I’m super curious to go out and count my cadence! —Jenn