Say hello to our newest writer: Cati Winkel! Cati is a certified parent coach who helps parents learn how to get through to their kids without the use of spanking, yelling, shame, blame, punishments or rewards. Cati has been obsessed with mindful parenting strategies since the pregnancy of her first child. When she found out how hard it was to follow expert advice and not yell, she pursued a career in parent coaching and learned there was so much more to it than just reading a book. Learn more about her here and expect more from her in the coming months as she writes for us monthly. Today she’s sharing her first post that’s all about how to help keep your kids from asking for things again … and again … and again. 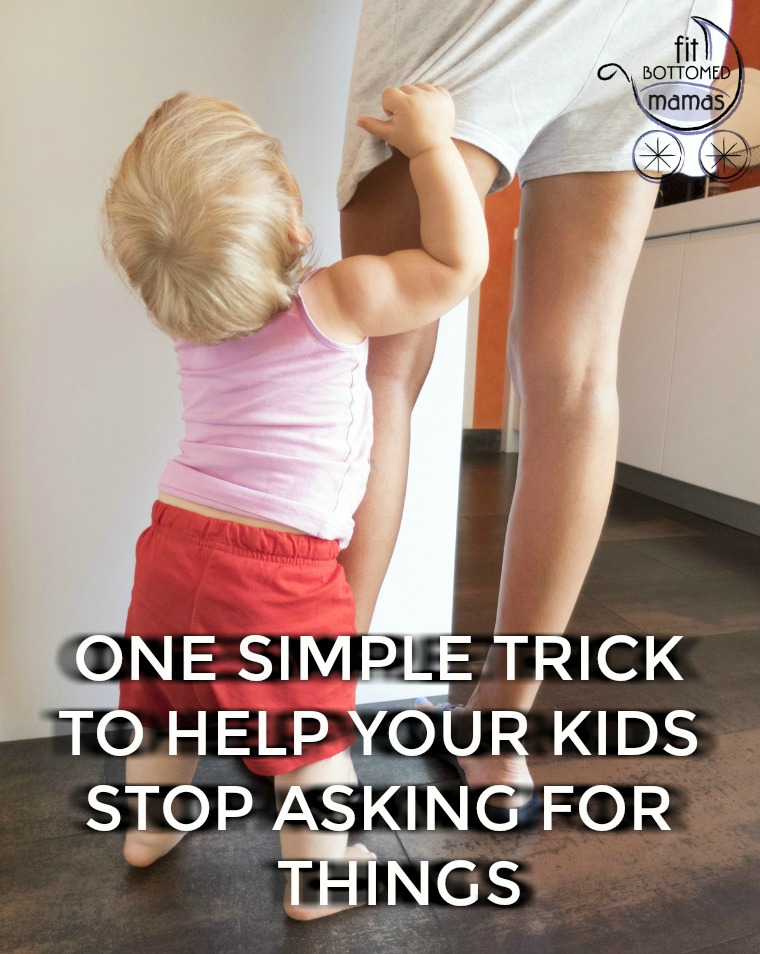 Greetings! I’m so honored to be writing for Fit Bottomed Mamas!

When my daughter was younger, it was so easy to get through a day without having to navigate how to say “no” when we didn’t want her to have something or do something we didn’t want to do. We would offer choices and then be done with it after that activity was over. But, it has gotten harder to set boundaries for my 4-year old daughter when she asks for things — she’s been exposed to a lot more and her persistence is off the charts.

Part of being a 4-year old is needing lots of adventures. It could be going out to a restaurant, going to a local children’s museum or buying a new toy. She wants to do these things all the time. What’s most frustrating is when she asks for something after she’s already gotten something else she asked for in the same day … which has been happening a lot.

I have always parented using acknowledgement when there is something my daughter needs or wants. An example of this is, “I can tell you’re really sad that we can’t go to the museum today and you’re disappointed.”

My daughter is a spirited child, so using simple acknowledgement is more likely to fuel her flames than cool her down. So when I use acknowledgement about not going to the museum, she’ll start to get even more upset that she can’t go there and has a really hard time letting go of that want.

What I had been doing was acknowledging her and then saying, “but we can’t do that because we already did this.” I was basically un-doing the acknowledgement. This would lead to more yelling and frustration until she was ready to let it go. Then, of course, I would be mad at myself for being a bad mom because I was having feelings of guilt and fear from raising an entitled and selfish child.

Here is how it went:

After going to the children’s museum plus getting hot cocoa from the local coffee shop, my daughter wanted to go to another museum at closing time.

Me: I can tell you’re frustrated you want to go to another museum today and we can’t.

Her: Mommy, I really wanted to go to Prairiefire!

Me: I know; I can hear you telling me that. Are you happy we got to go to Wonderscope?

Her: Yes, but I wanted to go to Prairiefire!

Me: Prairiefire is a fun place. Did you have fun at Wonderscope today?

Me: I had fun there, too. Are you thankful we got to go?

Her: Yes, I liked playing in the animal room.

Me: You know what else I’m thankful for? You and me and your baby sister had a good day today. Do you think you’d like to go to Prairiefire next week?

Me: Great, I think that’s a good idea. What else are you thankful for? (And we talked about that and how other kids aren’t able to do as much as she can so we’re pretty lucky, etc.)

Here is the beauty of this process: instead of thinking about what she’s missing out on, she’s thinking about the fun she already had. I’m helping her change her mindset from not having what she wants to being happy with what she’s already been able to do. And, she’s looking forward to being able to do it again— instead of being sad that she can’t do it right now.

So far, this has worked for everything I’ve tried it on. Screen time, going to restaurants, toy stores, you name it.

I love it because I’m not distracting her from her feelings and needs, and she’s still being acknowledged. I don’t need to buy her love by giving her even more things, and her tantrums have been mitigated.

What have you done to stop your kids from asking for things? —Cati