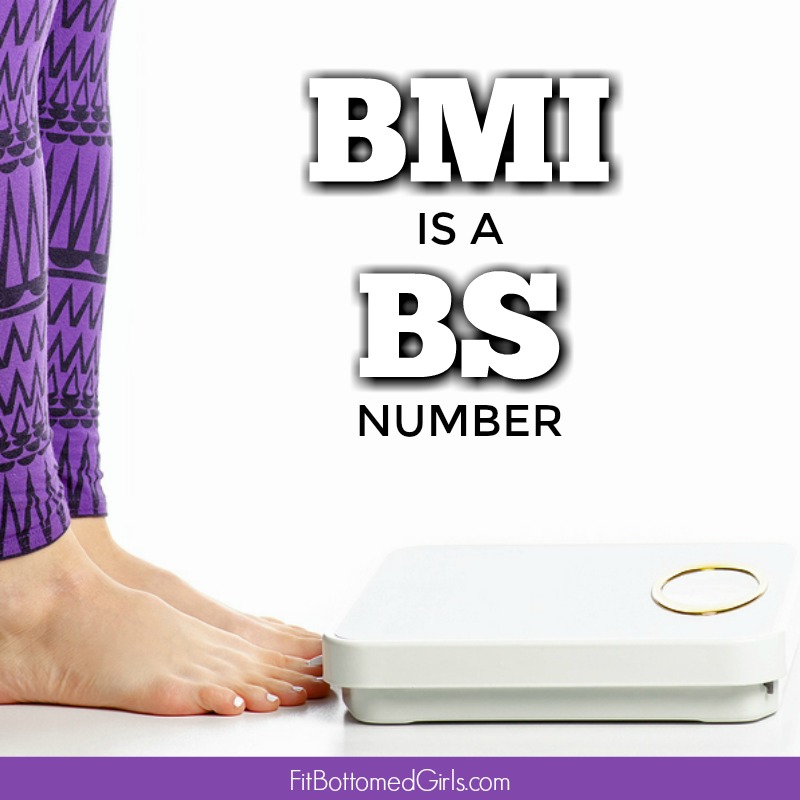 As a health and fitness professional, I initially thought it was nice that my doctor’s office started sending me helpful emails about making healthy food swaps and adding more steps into my day shortly after my last regular check-up. Then, I came to discover that it was actually an automated response to the body mass index (BMI) number that was calculated during my last visit. My doc’s system thought I was “overweight.”

I typically carry about 145 pounds on my 5’2″ frame. That gives me a BMI of 26 — which is “overweight” according to the chart. But I’m also a competitive athlete so I seriously LOLed at this idea that I’m considered “overweight.” I’d need to lose 10 pounds to have a “healthy” BMI, but the only way I could pull off that kind of weight loss would be to lose a limb or ditch 10 pounds of muscle — neither of which is an acceptable option for me.

Then my laughter quickly turned to heartbreak for all the women out there who may not be in the same mental space and as able to laugh it off as I am. It wasn’t all that long ago that I, too, would’ve been devastated to have a doctor tell me that — simply based on my height and weight alone — I’m not a “healthy weight.” So I’m just gonna come out and say it:

BMI is a BS number.

Body mass index (BMI) has been around since the 1830s. It began as a simple screening tool to classify people and their risk for developing health issues. The idea is this: based on how tall you are, without any other information about you at all, BMI says there’s a certain amount you should weigh in order to be considered healthy. In other words, weight indicates health.

Yeah, I call BS … for so many reasons.

It’s a ridiculous oversimplification to say that you should weigh a certain amount based on your height. There are far more important factors to consider. With BMI, there’s absolutely no distinction made between a pound of fat and a pound of muscle — even though that certainly matters when assessing overall health.

BMI also doesn’t take into account the differences between genders or ethnicities, nor does it consider where the fat is stored — which is important because it’s actually visceral (“belly”) fat stored around your abdominal organs that’s linked to increased health risks. Having body fat alone doesn’t make you less healthy.

Fortunately, the general consensus now is that BMI simply cannot accurately predict health. But, as I found out recently, that sadly isn’t stopping doctors from calculating it.

What Does This Tell Us?

Once again, this proves that the number on the scale just doesn’t cut it when it comes to determining overall health and wellness. At some point, we really need to stop perpetuating the belief that “overweight equals unhealthy” and “normal weight means healthy” because neither of these statements are actually true. Health is a combination of many factors, and while weight can certainly be one of those factors, on its own, it’s generally a poor indicator of health, either way you look at it.

So instead of focusing on what the scale or some silly BMI chart says, we’d all be better served by focusing on our health and fitness, since these are far better indicators of long-term wellness. We should also not be discouraging people from packing on lean muscle mass for fear it will increase their “overweight-ness.”

For many years, it was numbers like BMI and the number on the scale that led me to make bad choices about my own health and fitness. I was afraid to eat more to boost my energy levels and properly fuel my workouts, or up my protein intake to add more muscle to my frame. I didn’t want to feel the shame of seeing the number on the scale go up despite all my best efforts to improve my health and fitness. So if you’ve got muscle on your frame or are otherwise actively engaged in a fit lifestyle (as we FBGs do), know that you can easily be cast into the “overweight” bucket … and it means absolutely nothing.

In the end, no number — not your BMI or the number on the scale — has the power to define you or your value. We are far more complex than that.

If you want to know if you’re healthy, talk to your doctor about other types of measurements you can use, such as blood pressure, cholesterol and triglyceride levels, blood sugar, family history, and physical activity. By following the wrong numbers, we may be shooting ourselves in the foot. This needs to stop.

How do you measure your overall health? —Alison

Add a comment Cancel reply
18 Comments
Just for You
Working out at home
Get free strength, cardio, yoga, and meditation videos.
Try them
STAY IN THE KNOW
When new stuff happens, you'll be the first to know!
About Us
Jenn and Kristen are passionate about letting women know they're more than a number on the scale.
Get the deets
Instagram
X