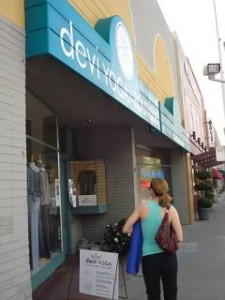 Usually on Thursdays we review a workout DVD, but because Erin and I just spent a glorious four days together torturing ourselves with new classes, we thought we’d take today and tomorrow to give you the 411 on classes we tried. Enjoy!

And by “feel the heat,” I mean the 105 degrees of somewhat-dry, somewhat-moist air. In a studio. While doing a series of 26 yoga poses. Twice.

That, my friends, is the basis of Bikram Yoga, most commonly known—and quite rightly so—as hot yoga. (Although I would fight for renaming it sweating-buckets yoga.) Erin and I recently had a reader request to try out this extreme form of yoga (thank you Heidi!), and like good Fit Bottomed Girls, we threw on our shorts, gulped down copious amounts of water and showed up to the studio ready to go. Or so we thought.

We were greeted by a sauna-blast of 95-degree air that only got hotter. Not sure why we were surprised, but we were. Thankfully our instructor,Mare,at Devi Yoga in Menlo Park, Calif., was awesome and told us up front how things would be: hot, sweaty and she said that we’dprobably feel dizzy and lightheadedat times. Boy, was she right. At points during the 90-minute workout (Erin and I mistakenly went into the class thinking it was just an hour, which was probably a good thing because we may have psyched ourselves out after having to survive that long in the hot studio), I felt both oddly refreshed, acutely focused, lightheaded, and oh so hot…repeat, repeat, repeat.

Mare began with 10 minutes of warm-up and breathing exercises, followed by unlimited amounts of water, rest in child’s pose whenever we needed it and the opportunity to go deeper into poses than you’ve ever been before. Because of the heat and the sequence of poses, you are able to stretch deeper down than normal. This was awesome, liberating and kinda freaky when all of a sudden you can easily touch your head to your knee when that has NEVER HAPPENED BEFORE. (Erin has much better flexibility than I, so she wasn’t quite so baffled by this, but she was still impressed.)

Mare used no music in the class, and the only noise present was your breath, the whir of a giant fan (not to cool you off but to circulate the hot air evenly) and occasionally the squeak of a sweaty mat on the wood floor when someone needed to readjust her positioning. There was something about the quiet, the heat and the breathing that had me more focused than I’ve ever been in a class, yoga or not. It was insane, and even though I was hot, it was kind of enjoyable. Word to the wise though: you may be tempted to wear shorts (like I did) to stay cool in hot yoga, but it really makes tree pose a challenge and/or impossible, so opt for the capris. On more than one occasion I lost my balance because my drenched-in-sweat legs would slide off one another. Sick.

If I return to hot yoga, I’d probably want to do a shorter class because 90 minutes really kills your evening and you feel so heavy afterward that you just want to lie around and drink Jamba Juice. However, I would definitely want an instructor like Mare again. She continuously preached that yoga was about respecting yourself and your body, and knowing your limits (I really should have listened to that more when I got into full camel the second time and really, really felt it the next day.). Plus, she was always showing modifications and correcting our form when needed. She even assisted me in a hip flexor stretch that I definitely needed some extra push in. It’s amazing what a little umpf from a pro can do for your flexibility. Mare, if you’re out there, I declare you an official FBG!

Fit Bottom line: Hot yoga isn’t for everyone, but for those who enjoy heat, like a challenge and don’t mind sweating buckets to feel uber focused, have at it! —Jenn

Don’t miss Erin’s post tomorrow that details her first experience with group cycling and the Bosu. As she’ll describe in great detail, it was love at first spin/Bosu jump!