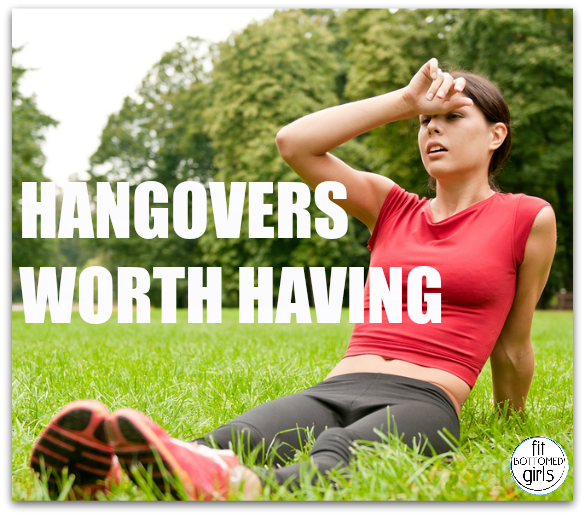 Never would I put the words “good” and “hangover” together in a sentence, but fun times call for drastic linguistics. And two weeks ago was definitely a fun time that resulted in…you guessed it…GOOD hangovers.

As previously mentioned by Erin, I flew out to her neck of the woods to see Britney Spears live, celebrate a year of hard work on FBG, plan new exciting things for FBG (some of which we’ll reveal next week—whee!), check out some new workout classes and new eats, and have some fun with my fit bottomed bud.

Note that I did not mention drinking copious amounts of margaritas or red wine, although we did sample some. These hangovers were caused by fun and not by any sort of older-than-21-to-drink beverage. Let me elaborate:

Hangover No. 1
Every time I fly, I hydrate like a mo fo. This usually leaves me with minimal jet lag and maximum trips to the ladies room (totally worth it). This trip was different though. Despite my best efforts at sucking down water like a camel during my 5-hour trip, I was not prepared for hydration post-flight, namely giddiness at seeing Erin and being on vacation, along with a 45-minute drive in bumper-to-bumper traffic to the concert, two-plus hours in the concert (screaming, dancing, singing, laughing, squinting to see Brit) and another hour to get home sans water bottle. It was worth it, but my goodness did Erin and I feel like hell the next morning. I’m sure the two-hour difference between my usual Central time and her West Coast time didn’t help, but we both got up and felt like we’d personally spent the night drinking pitchers of margaritas with Brit herself, instead of squinting at her performance from our nosebleed seats (again, totally worth it).

Hangover No. 2
Still shaking off Hangover Numero Uno, Erin and dropped in on a hot yoga class. I won’t give all of the fun details away because I’ll be posting about our experience in length later this week, but just suffice it to say that 90 minutes in 95-to 105-degree heat will make you feel simultaneously amazed at yourself for doing any sort of activity in the swelter (let alone camel pose twice) and and a little tuckered out. Not even a shower or good greasy Indian food helped. In fact, Erin and I didn’t shake off our hangover feelings until later that night when we popped in Footloose, possibly the best movie ever made. (The angry dance scene in the warehouse? PRICELESS. And how neither of us had never seen it before? UNKNOWN.)

The Remedy
Thankfully, we didn’t spend the whole vacay feeling icky though because we found the hangover remedy: Jamba Juice. Thank goodness there’s not one in my neighborhood or I might become an addict. Erin and I had breakfast there twice in a four-day span—and we didn’t first try it until day three of my trip—trying a total of four smoothies, one reader-recommended oatmeal and one wheat grass shot. While the shot wasn’t bad (it tasted like grass), it did help us shake off our hangover-ish feeling, and the smoothies and oatmeal made us happy, maybe even a little giddy. We tried all three Jamba Light varieties (all less than 180 cals; all tasty), Mango-a-go-go (also great and mango-rific), and the Blueberry & Blackberry Oatmeal (ah-mazing). If Erin and I lived in the same town, we’d have the menu “critiqued” within one month easy (in the name of FBG research of course).

I do have to say that Erin and her hubby were fantastic hosts during my stay (navigating some serious icky traffic to show me around town and happily providing me access to cheesy 80s films and Bravo TV), and I can’t thank them enough for their hospitality. In fact, the trip was so great that we plan on doing the whole thing again next year when FBG enters its terrific (much better than terrible) twos. I very much look forward to next year’s adventures with another coast to explore. No telling what hangovers we’ll have and remedies we’ll find then (but I’m sure you’ll hear alllll about it).

In the meantime though, I’m kicking back at home, turning on some Britney and having a glass of red wine followed by some water. Lots of water. Hangover No. 3 will have to wait for spring 2010. —Jenn