Yesterday we interviewed Rock & Roll Motorcycle herself, Jillian Michaels. Jillian is most known for her tough yet emotional approach to getting people healthy on The Biggest Loser, and she dished to FBG on her latest venture into nutritional supplements. Today we’re continuing the Jillian content by reviewing two other pieces of her get-fit empire: a book and two of her DVDs. Erin had the opportunity to review Master Your Metabolism, and Jenn was sent her two most recent DVDs to give the once (or 14 times as you’ll see below) over. May the bad-ass Rock & Roll Motorcycling begin! 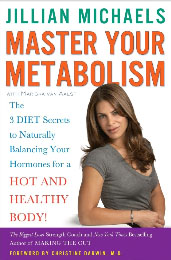 If you’ve been battling those extra 15 pounds your entire life and just can’t shake them, Master Your Metabolism may be the book for you. After reader Stephanie P. sent us a detailed email raving about the book, we immediately added it to our to-read list. In the book, Jillian talks about her background and her struggles with keeping her weight down in spite of calorie counting and crazy workouts. She details how she later discovered it was her hormones that were messing up her metabolism. Her testosterone was extremely low, her stress hormones were out of control, and she was also hypothyroid, all of which were wreaking  havoc on her efforts to be as healthy as possible.

In the book, Jillian does an amazing job of breaking down all of the key hormones in the human body, how they can get messed up and what you can do to fix yourself. It’s a very fact-heavy and science-rich book, but Jillian makes it accessible for any reader. She takes a firm stand against processed “Frankenfoods” and recommends whole, organic foods. With meal plans and shopping lists, she makes cleaning up your diet a breeze. As Stephanie said in her email, “It has inspired me to clean up my act…not just to be in better physical shape, but to be in better overall health.” I have to agree that it did the same for me. 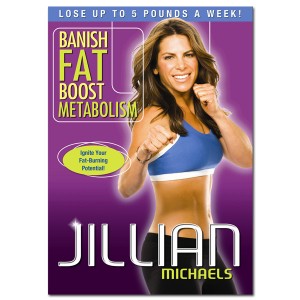 As Bob would say, this workout DVD is no joke. No friggin’ joke. It’s hard. And awesome. Ask my husband. I somehow convinced him to do this with me, and then we were sore together for the two next days. (Kind of my relationship dream, to tell you the truth.) Including a quick warm-up and cool down, Jillian takes you through a 55-minute workout of seven circuits of mostly high-intensity cardio moves that are repeated twice. To get all the way through them, you need a good pair of knees, a lot of energy, a pretty big space to lunge, mountain climb and plank your heart out (including walking planks—OMG the shoulder soreness the next day), and a big towel to soak up your own sweat. Again, it’s no joke. Jillian’s cuing and information is spot-on in this DVD. The only thing left to be desired is the music…it’s not inspiring or special in the least. And, I do not endorse it for beginners unless you’re willing to modify a lot of the moves and hit pause a lot. Definitely a DVD towork up to. And for the intermediate to advanced exercisers (or those who know and love The Shred), add it to your cardio collection stat! 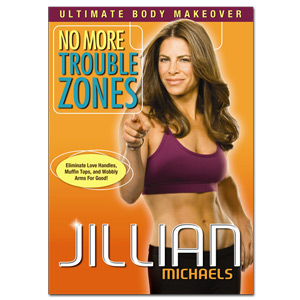 This workout DVD isn’t as cardiovascularly hard as Banish Fat, Boost Metabolism, but it’s still really tough (read: not for newbies). The 50-minute workout includes a warm-up and cool down and seven full circuits of crazy. With just yourself, a mat and a pair of dumbbells, it’s amazing what pain Jillian can inflict on you. From push-ups to twisting planks to windshield wipers, she brings it. Hawd. And with seven circuits of effective yet unique exercises (you don’t see these moves in every other strength DVD on the market), you get a full-body workout without complicated choreography or perkiness. You get Jillian. Doing her thang. Which is awesome. And she even dogs on her own flexibility—or lack thereof—which filled me with such delight as I am sooo not a bendy person. You rarely get someone making of themselves in a workout DVD. Made me love the DVD even more.

Have we convinced you yet that Jillian is certifiably bad-ass? We thought so! —Jenn & Erin