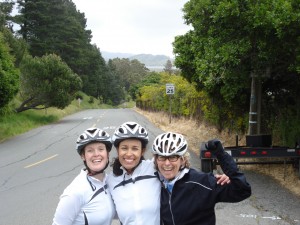 A few weeks ago, I hinted that I had an upcoming super-fun event of mountain biking, yoga and running to attend.And I’m happy to report that—injury and all—I was able to go and kick ass. Okay, so I couldn’t run, and my foot cramped up on the road bike so badly that I ended up biking a full 10 miles in pain (apparently I have a history of being a glutton for punishment), but I rocked those side planks in yoga. And I had a fantasticly nutritional time.

So you’re probably wondering where the heck I was, right? Well, I had the great fortune to be invited by Luna/Clif Bar to their annual Team Luna Chix summit in San Francisco to learn more about the Clif Bar company and Luna’s female initiatives and fundraising efforts. And the best part? Well, besides being in California, surround by inspiring athletes, learning how to road cycle and eating unlimited amounts of Luna Bars? FBG Tish got to come, too! And we had the BEST time.

Okay so the weather wasn’t great, but you couldn’t beat the scenery andthe weekend was jam-packed with inspiring and interesting tidbits. In the coming weeks, Tish and I will do a few detailed posts on what Clif and Luna bar products we tasted (read: ate our weight in) at the event and what we thought of three pieces of Luna’s new activewear line, which we’re happily sporting and sweating in above.

For now though, Tish and I each wanted to share our top threelessons learned at the summit, where we sat in on endurance event clinics and rubbed elbows with some elite athletes. 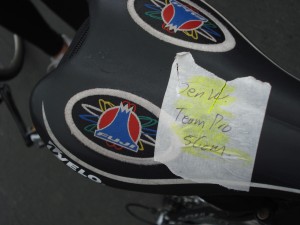 1. Take a chance (even—and especially—if it terrifies you).Had I ever been road riding before, onunbelievably skinny tires amongst traffic lights and motor vehicles? Um, no. And was I scared to join a group of  advanced road cyclists on a 20+ mile bike ride with San Fran hills? Um, YES. Heck YES. Tish and I didn’t know how to brake, let alone shift the darn things and here we were, going on a big group ride. Did we slow the group down? Yes. Did they seem to mind and were we overly self conscious? No and yes. All of the women riding—as intimidating as they were with their clips and lingo—were excited to introduce the sport to someone new. And while I kept apologizing all over myself and then some, after an hour and suffering through a major cramp, we kept going and going and going. And we did the dang thing. As Tish would say, we were diesel.

2. Education and legislation is power. All of the Team Luna Chix raise money for the Breast Cancer Fund, which raises money for the prevention of breast cancer. Right now they’re educating women on how common ingredients in our water, plastics, cosmetics and kids’ toys may increase our risk. They’re also armed with research and storming the capitol to require companies to be more forthcoming about the ingredients they use. You can learn how to reduce your risk here.

3. Don’t go it alone. I have never trained on a running team or really done any workout consistently with a group of women (just a group exercise class here and there). But after seeing the bonds that some of Team Luna Chix women had, it inspired me to reach out more and stop being such a lone runner! Having a team to support you and obsess with is an amazing tool to help you reach your goals. They just started a running group in my home town and I plan to check it out once the ol’ booty is firing again… 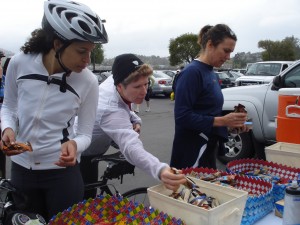 Now which one should I have…

1. Don’t let fear hold you back. I kind of forgot to mention to Jenn before the ride that I’m kind of, sort of, terrified of bikes. When I was a wee one, a stick got caught in the spoke of my tire and flipped me into traffic. Yes, I’ve been run over by a car and I blamed that darn bike. I shoved that fear deep down in order to try something new and girls, am I glad I did! I’ve never felt so empowered. Not only did I conquer my fear, I also conquered some killer hills.

2. Zen moments pop up randomly. Something happened to me out there on that darn bike. I had to be present. I had to focus on the road, the winds, the hills, and the cracks and grooves of the paths. I felt like the roads were talking to me in a sense. I’d listen carefully and nature would whisper back. I teared up out of pure joy at least three times. (And no, it wasn’t the blistery cold winds’ fault.) I became one with the road. It was pretty surreal. Ask Jenn…She was the one who had to listen to me say over and over again, “Ugh, this is beautiful! Wish you were here.” I’m weird like that.

3. Brake very carefully. Right before the ride, a lady with good intentions warned Jenn and I of all the no nos we shouldn’t try on the bike. No. 1:  Do NOT squeeze the front brakes individually. She mentioned casually  that this would cause us to go flying off our bikes, head first. Of course this freaked me out royally. As we started to line up to leave, I gazed at my brakes long enough to miss the fact that everyone ahead of me had stopped. I squeezed the handle bars with all of my might and instead of my head going forward, my pelvic area took the trip. Let’s just say it was a very good thing I was born a girl and not a dude. That little stunt could have single-handedly taken away my tenders.

Big shout-outs to Tinsley, Ami, Sabrina, Rachael, Mara, Kate, Cindy, Kim, Jane, Stephanie, Shonny and Katerina for showing us the best time! Plus, a big thanks to all of the other countless ladies we chatted with and were inspired by but whose names we can’t remember (including the yoga instructor and the two galswho just started a running group in Orlando)!  Girl power! —Jenn & Tish

If you need more inspiration, stay tuned to FBG later this week for a Q&A with the one-and-only Bob Greene and a MASSIVE giveaway!