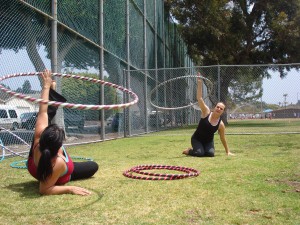 I know one thing for sure when it comes to Erin and Jenn, they’re far from boring. When the bosses gave me this assignment I had to make sure I heard them correctly.

“You’re going to let me hula hoop?…This counts as a workout?!”

I felt like for once I was getting over on the two. Sure, I’d go play with some hoops for an hour. No problem! (Easiest workout assignment in the world.) You think I would have learned by now that the FBGs never dilly dallywhen it comes to a good sweat.

I met up with Jackie Hesley, hoop dancerextraordinaire and teacher, on a beautiful Saturday morning in the Santa Monica, Cali.,area and basically got a nice slice of humble pie served to me on a hoop for breakfast. My boyfriend scoffed the hula hoop,stating it wasn’t the kind of workout a guy could get sweat to. Hmph. He came back from running around the park and saw his girl, hula hoopin’ and sweating like I do in his boot camp classes (he’s a personal trainer and tortures me regularly in class) and his mouth fell open.

Don’t get me wrong, the class is crazy cool fun. Jackie plugs up her iPhone to a small speaker system, and we party like it’s 1999.  Plus she’s hilarious and nice to boot. She teaches a hodge podge of folks (men and women), so she’s used to different levels of hula-hoop hossness being in her mix, thankfully. I personally hadn’t hooped since probably kindergarten when my boy crush hula-hooped up to me and said he’d marry me if I could hoop for longer than him. I tried. I really did! But, alas, no love connection.

This meant Jackie had to give me some tender lovin’ care on my first day. I learned how to hula the correct way (engaging my core and calming down those wacky hips of mine), as well as how to dance around in a circle while hooping (this killed my legs!) and hooping around my arms, wrists and hands.

My arms were KILLING me post workout, folks. I loved it!!! I don’t know about ya’ll, but I need to feel something in order to avoid feeling like a fitness failure. I want to know my muscles areworking on the chain gang and paying their dues to get buff. During that class, my arms paid some dues.  And the best part? The hour flew by without me even realizing how hard I was working.I was just playing around, hula hoopin’ my little core off and trying to be a fairy of fury like Jackie. (She told me a man from her class does a wickedly good impression of her flittering about. It’s true, too. She’s totally a hilarious ball of sunshine.) 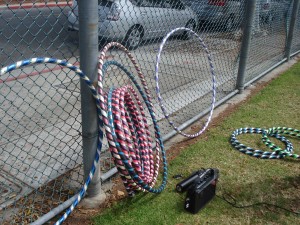 If you’re in a rut or you just haven’t found a workout that works for you yet, I recommend trying a hula-hoop class. You can burn up to 400 to 600 calories in an hour, meet fun people and learn what it feels like to throw some exercise into your mix that makes you feel great both physically and emotionally. Like Jackie, my hula hoop hoss told me, you tend to leave all your worries and stresses at home. Hula-heads don’t have time for stress—you’re much too busy trying to make sure you don’t smack your shins with a huge hoop.

I plan to grab a bunch of my girlfriends together and treat them to a class soon. It’s just too awesome to keep from the world, I’ve decided. If you’re interested in becoming a hula-head, check out the Hoopnotica website to find a teacher near you. If you live close to Santa Monica, I totally suggest you hit up Jackie’s website. She teaches at Marine Park and new hoopers are always welcome! —Tish