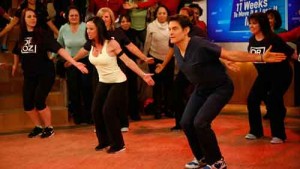 We had such a blast chatting with Dr. Oz last year (dude seriously knows his stuff!) that when we got the chance this year to learn more about his new and free “11 Weeks to Move It and Lose It” in a conference call with other publications, we jumped at the chance! Read a few highlights from the call, along with details on the new program and how you can watch The Dr. Oz Show with us live on Twitter!

An Interview with Dr. Oz

What’s the biggest mistake that people often make that sabotages their New Year’s resolution to lose weight?Also, how much weight can people expect to lose in your new program?

And this was hammered home for me on my 100th show which we did with Richard Simmons. And Richard came on. He’s lost more than 100 pounds. We had 100 people on the show that had lost 100 pounds each at least. And I asked every one of them what was the key? I mean, you know, how to do it. “You’ve done it. What was the secret?”