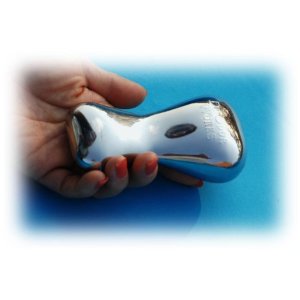 A few years back, FBG Erin got me one of those amazing how-the-heck-do-they-do-that Rub Away Bars from Crate and Barrel for my birthday. The thing is seriously amazing at getting the smell of garlic, onion or even fish off of your hands when cooking. Well, turns out the same principle—with a slightly modified design for, ahem, anatomy purposes—works on the rest of the human body for getting rid of stink of any kind. And I mean any kind. Even those really bad smells that are more stank than stink. (If you live with a boy, you know what I mean.) How do I know? I tried it—and so did the hubs.

First of all, the De Odor Works weighs so little that when you go to pick it up, you almost chuck it out of your hand (kind of like that 7th-grade science experiment where the teacher picks one poor student to pick up a Styrofoam cooler “filled with soda,” only to have him jerk it up and look like a total idiot because there’s actually nothing in it). So it’s hard to imagine how this little piece of stainless steel is going to combat post-gym odor. But with some warm water in the shower and some gentle rubbing with the bar (there are so many jokes, I’ll let you make your own here), it actually does get the stink, stank and stunk out.

According to the company, the reaction between stainless steel and tap water actually eliminates the volatile sulfur compounds that cause body odor. I did notice that my armpits and neckline smelled less “natural” (or as my husband affectionately calls it, “wet-dog-ish”), and my husband noticed the same (although he smells more week-old musty than wet-dog). Seeing that it has no chemicals or artificial ingredients—not to mention that it lasts forever—it’s kind of awesome to keep in your gym bag. I can’t tell you the number of times I’ve gotten soap all over the clothes in my bag and gone to work looking like I was attacked by a sweet-smelling version of Slimer.

But here’s the kicker, you’re supposed to use the bar after cleaning with soap and water, which kind of defeats the convenience of it all, no? Soap and water gets most of the smell out to begin with, so this is really just for the stinkiest of peeps. Also, the bar’s effects don’t last long enough to give up deodorant entirely, at least for me. But it’s still awesome. And, seriously, the directions—which show you how to use De Odor Works on your armpits,  feet and other “areas”—are enough alone to make it worth your while. Assuming, of course, that you have a sense of humor similar to that of the same 7th grader who got schooled quite literally with the cooler. —Jenn