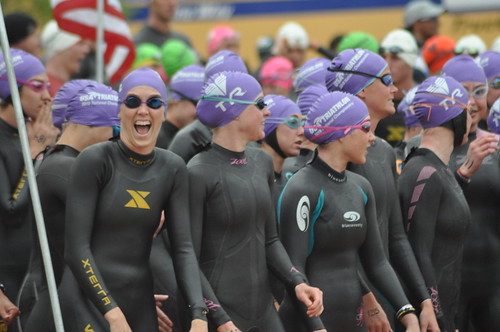 I’ve put in close to 80 hours of training for my race. I’ve done long, steady workouts, and I’ve done shorter, faster, interval-based workouts. I’ve started doing short bricks, which means I go straight from a bike workout to a run, or from a swim to the bike. Basically, I’ve logged more loops around my tiny neighborhood than a graduate from MIT could calculate.

And I’ve started seeing results. Real, calculable results. I mentioned in my last update that my swim time had improved significantly, which is great, but kind of to be expected since I was such a relative beginner when I did the first time trial, and it makes a huge difference when you start getting in the pool two or three times a week. But I wasn’t sure where I was with the run.

I’ve never been very speedy. I’m stubborn, and I try hard, but even for a 5K, I’ve always had a hard time reaching a faster pace than a 10-minute mile, which has driven me crazy for years—I work so hard at it and just can’t seem to improve. Until now! I’m finding that, on a short run of three miles or so, I can keep my pace between 9 and 9:30. And I can even push it to below 9 minutes for shorter intervals. Go me!

A couple of weeks ago, I put my training to the test with a 10K, the middle half of which ended up being on a trail through the woods. Even with the uneven trails (which, although cleared well by the event staff, still consisted of three types of terrain—soft beach-like sand, slippery leaves and hidden gopher holes), I managed to finish with a pace right around 6 mph, or a 10-minute mile. Had I done the 5K, no-trail option, there’s no doubt in my mind that I would’ve set a PR that killed my previous times. So, major, major improvement.

I’m still solidifying my plans for gear. I have yet to decide if I’m going to wear a wetsuit for the swim—most likely, it will be allowed, but I’m not sure the time it would save me in the water wouldn’t be totally canceled out by the time it would take me to struggle out of it. I need to find a proper tri suit that offers good support, doesn’t look diaper-y, and is, you know, flattering. (Shut up, it totally matters.) Suggestions are most welcome. For my bike, I have opted for toe cages rather than clipless pedals, both because clipless (which actually means you clip in with fancy cycling shoes) scares me as a newbie (plus it’s an added cost), and also because I don’t want to have to change shoes. Time spent in transition is still time, after all.

The bigger question for me, though, was how I am going to handle hydration. I probably drink more water than I need to when I run, but what can I say? A girl gets thirsty out there, and I sweat more than your average lady, so I don’t want to rely on the water stations. Plus, I’m still having trouble grabbing my water bottle on the bike, and if I don’t get enough to drink during that 40K ride, well, I’m hosed. So, I’ve decided to use my Camelbak hydration pack for the bike ride, and this cool little palm holder bottle thing (probably filled with Gatorade) from FuelBelt for the run.

And, because I’m nothing if not a planner, I’ve signed up for a sprint tri (basically half the distance) taking place two weeks before the big race. I’ll try everything out without too much pressure since, you know, it’s not my Big Race, and if something doesn’t work quite the way I want it to, I’ve got time to adjust. But I’m happy to take suggestions on gear I should be checking out in the meantime. Is there anything you couldn’t possibly live without for swimming, biking or running? Aside from Body Glide, of course, because I wouldn’t dream of racing without that. All those opposed to chafing, please say, “Aye!” —Kristen